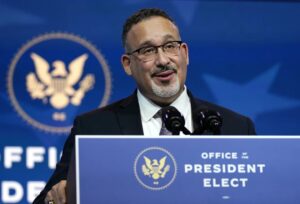 Mason has long been considered a flagship school of the Koch network due to its numerous connections to the Charles Koch Foundation and its donations to our school. Unfortunately, Mason isn’t alone, with the foundation giving more than $458 million across 550 higher ed schools and organizations across the country since 2005.

UnKoch My Campus, a nationwide group committed to protecting higher education from the undue influence of private investors over universities, has been working to encourage U.S. Secretary of Education Miguel Cardona to address the fact that Koch spending in higher education is a large problem.

At Mason in particular, Koch’s influence looks like our law school being named after Antonin Scalia, a famous right-wing supreme court judge with racist and homophobic views. This was after an anonymous donation of $20 million to the university, followed by a $10 million dollar donation by Charles Koch.

Additionally, in 2019, the law school brought on Supreme Court Justice Brett Kavanaugh as faculty, despite his history of sexual assault. Lastly, James Buchanan Hall, previously known as Mason Hall, was renamed for the racist right-wing economist who taught at Mason and spearheaded Koch’s involvement here.

Mason prides itself on being a diverse school but continues to promote people with regressive and harmful ideals and practices. It’s a betrayal to their students, faculty, and alumni.

There is also harm that comes with dark money donations, such as with those Charles Koch has given in the past. Conditions of Koch funds have included faculty hiring decisions, course/curriculum approval and more.

As a Mason student myself, as well as a student organizer for UnKoch My Campus at GMU, this is an issue that is important to me and should be important to anyone who shares any of the values our university claims to hold.

Back in 2019, Transparent GMU unfortunately lost the Virginia Supreme Court case to hold the George Mason University Foundation to VFOIA Standards. However, since then, Gov. Northam signed HB 510 and HB 1529, both bills aimed at fostering accountability of universities and making donor agreements public to students. We may not have kicked dark money off campus, but we helped push the needle in the right direction, requiring more transparency and accountability when it comes to donors.

The logic behind Koch’s financial support of higher education is to encourage an anarcho-capitalist curriculum, as well as to create a pipeline of sympathetic students who will end up benefiting the Koch network in the long run. Many of the problems with this are already showing today: As a fossil fuels billionaire, Koch has had many hands in funding organizations that deny climate change. Additionally, the recent controversy surrounding Critical Race Theory by the right has been fueled and funded by the Koch network.

With all this in mind, it is imperative that Cardona listens to those most directly impacted by Koch’s influences and encourages universities to divest from the Koch network to protect their own values and reputations.

If you want to take direct action, you may send Cardona your thoughts here or you can support efforts to remove Koch’s influence at Mason by signing the petition to rename Buchanan Hall in order to better reflect Mason and our values.