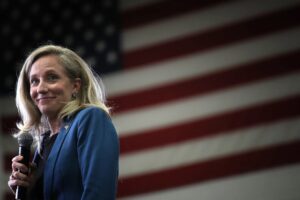 Elected in the blue wave of 2018, former CIA analyst Abigail Spanberger survived a tough election in 2020 but now faces perhaps the biggest challenge of her political career: surviving the 2022 midterms.

Poised with a potentially unfavorable district next November, Spanberger will have to rely on her CIA skills and moderate background in order to survive a potential red wave next year.

Spanberger’s current district, Virginia’s 7th, was drawn after court-ordered redistricting in 2016 to include areas of Virginia from Northern Virginia down to the southern portions of Richmond. The wide range of her district makes her one of the most vulnerable Democrats in 2022.

In 2018, Spanberger narrowly defeated incumbent Congressman Dave Brat with 50.3% of the vote. She then was able to survive a narrow re-election campaign in 2020 with a slight 50.9% of the vote against Republican Nick Freitas.

Currently in the 2022 race, Spanberger is being challenged by numerous lesser-known candidates on the Republican side but could face well known Republicans such as State Senator Amanda Chase.

With newly redrawn districts following the 2020 census, Spanberger could find even a challenge from ultra-conservative Chase a potentially strong threat if her district were to soon envelop any new deep red areas of southern Virginia.

All these challenges combined put Spanberger as the most likely member of Virginia’s congressional delegation to lose re-election. Even Representative Elaine Luria, who represents areas near Virginia Beach, is more secure for re-election given the recent shifts of her district.

However, Spanberger hopes to be able to count on her moderate streak and a potential controversial Chase candidacy to help her pull through and continue serving the constituents of central and southern Virginia.