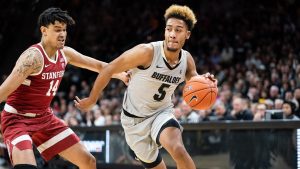 Newly minted George Mason men’s basketball coach Kim English has only been on the job for 28 days, but he is already making marked improvements to his team.

Over the last four weeks, English has secured several transfers and verbal commitments from many high-profile basketball players from across the country and one from the Land Down Under.

Let’s take an in-depth look at each of the newest Patriots:

English went back to his old stomping grounds for his first impact move. Before his time as an assistant coach at the University of Tennessee, English was on the staff of the University of Colorado men’s basketball program. Now, he reunites with one of his old players, D’Shawn Schwartz, in Fairfax.

Schwartz is a graduate transfer with one remaining year of eligibility. In his four years as a Buffalo, Schwartz started 99 games, scored 8.0 PPG and grabbed 3.3 RPG. Schwartz, a 6-foot-7-inch guard/forward, played in both of Colorado’s NCAA tournament games this season. He led his team in scoring in the loss against Florida State and finished with an 18/3/4 stat line in the team’s dominant win versus Georgetown.

In the story announcing the signing, English mentioned Schwartz’s postseason experience as a key factor in his decision. He said, “D’Shawn got a taste of winning in the NCAA Tournament this past season. His hunger to get back to the Big Dance appealed to what we are trying to re-create here at Mason.”

If one former player wasn’t enough, English got a second. Nicknamed “Ticket,” junior Davonte Gaines is a 6-foot-7-inch guard who is transferring from the University of Tennessee where English coached as an assistant for the previous two seasons.

While at Tennessee, Gaines did not get much of an opportunity, only averaging 7.7 minutes per game in 48 games played. However, English is excited about what Gaines can provide Mason, especially on the defensive side of the ball.

“He takes great pride in his defense and his ability to be a connector on offense,” English said. “I was fortunate enough to get to watch Ticket in practices and games for two straight seasons at Tennessee. I witnessed his toughness, selflessness and motor each and every day. His mindset as a winner and as a competitor will be greatly welcomed onto our team.”

When describing his thoughts on the 6-foot-4-inch Cooper, English cut right to the chase.

“The more our staff watched DeVon Cooper on film, the more we realized we were getting one of the best guards in America,” English said.

Cooper comes to the northern Virginia area from Morehead State University in Morehead, Kentucky. In the previous season, Cooper was named to the All-Ohio Valley Conference Second Team and the OVC All-Tournament Team.

This spring, he led the Eagles to the OVC championship and the NCAA Tournament. Against West Virginia in the Round of 64, Cooper led his team with 21 points, knocking down five of eight three-pointers, and four assists.

Last season, Cooper started 31 games, averaged 12.5 PPG, 4.9 RPG and 2.4 APG. The Louisville native will come to Mason as a fifth-year senior and become an immediate contributor for the Patriots.

Lastly, English is adding some international flair to the roster with the addition of Australian forward Blake Jones. The 6-foot-9-inch Jones is currently playing in Australia’s National Basketball League for the Brisbane Bullets.

In 2020, Jones participated in the Basketball Without Borders Global Camp during the NBA All-Star Weekend. In games within his age group, Jones averaged 31.2 PPG and 18.4 RPG.

In a recent interview, Jones said that he models his game after Brooklyn Nets superstar Kevin Durant. “He creates his shots [using] his size and length. [He’s] not the strongest guy out there but he’s still able to get to his spots,” he said. “Same with Brandon Ingram, another guy like that who uses his length, athleticism and finesse to get through people and get to his shots.”

It is clear that English is wasting no time getting his team in place. This is a great sign considering the exodus of players that occurred after Mason announced it was parting ways with former head coach Dave Paulsen.

A half-dozen Patriots entered the transfer portal shortly after Paulsen’s firing, and they have all found new homes.

Additionally, Ian Boyd entered the transfer portal in early February, but it is unknown at this time what his plans are.

With so many new faces on the court and with a new head coach, there will undoubtedly be an adjustment period in 2021. However, the projected outlook of COVID-19 cases and other leagues slowly looking to reduce restrictions is a positive for college basketball in the fall.

With nearly a quarter of the U.S. population fully vaccinated against COVID-19, the country is getting closer to a return to normal. This also extends to sports as leagues encourage teams and players to get vaccinated. For example, MLB is incentivizing this by offering looser restrictions around team facilities for teams that vaccinate a significant majority of their players and staff.

One would think that by the fall, the NCAA might give similar incentives to its teams and athletes. This would be a boon for Mason as building cohesion and learning a new system is much easier in person than virtually, especially when there is little continuity to begin with.

There are lots of unknowns going into the 2021-2022 college basketball season — but if one thing is certain, it is that year one of the “English Era” won’t resemble that of a traditional rebuild.

English isn’t starting over with a roster full of freshmen. By bringing in experienced players from big-name schools who are ready to make immediate contributions, this team won’t be a bottom feeder. While some rocky non-conference play is likely to occur as the team builds chemistry, this team has enough talent to win multiple games in the 2022 A-10 tournament.

PATIENCE IS STILL A VIRTUE, EVEN IN COVID TIMES