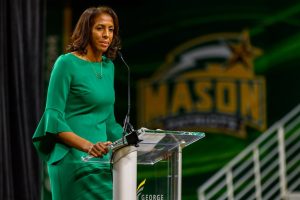 According to a terms sheet, Blair-Lewis was hired for five years, effective April 7, 2021, through March 31, 2026. Recently hired men’s basketball head coach Kim English was awarded the same number of years for his contract.

Blair-Lewis’ contract is broken down into two main categories, instead of English’s three. These two categories include annual compensation (base salary) and bonuses — with supplemental compensation for sponsorships and miscellaneous things being absent.

The bonuses, also known as annual incentives, are part of both Blair-Lewis’ and English’s contracts. English’s bonuses total to a maximum of $425,000, while Blair-Lewis’ bonuses add up to $232,500.

Blair-Lewis’ bonuses are structured exactly the same as English’s. There are three main categories — retention and both academic and competitive performance.

Retention bonuses for Blair-Lewis total to a sum of $25,000 if she is still actively employed as the head coach on April 1 of each season, starting April 1, 2022.

Here is the breakdown of Blair-Lewis’ competitive performance bonuses:

There are some bonuses from Blair-Lewis’ contract that are missing in English’s contract.

For instance, Blair-Lewis received alternative-postseason bonuses, while English did not. These bonuses included $2,500 for a WNIT appearance and $20,000 for a WNIT championship. English, on the contrary, did not receive any bonuses in relation to the NIT.

Editor’s Note: This is a developing story. There will be an updated article if more information is released regarding Vanessa Blair-Lewis’ contract if it is made available to Fourth Estate.