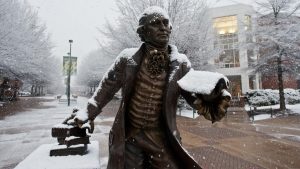 The COVID-19 pandemic has laid waste to college basketball schedules across the country. For the Mason men’s basketball team, it started at the very beginning.

Two days before the D.C. Paradise Jam tournament tipped off in late November, the Patriots’ first scheduled game against Northeastern University was canceled after Northeastern postponed winter sports after clusters of COVID-19 cases popped up among multiple varsity teams.

Mason was able to play out the rest of the tournament, but it wouldn’t be long before disaster struck.

On Dec. 2, the men’s basketball program paused activities after a positive test within the team. This pause lasted nearly three weeks and resulted in the cancellation of multiple marquee matchups, including games against the University of Maryland, James Madison University and Old Dominion University.

A half-dozen non-conference games were taken away from Mason, which is significant considering how inexperienced its roster is. Of the nine players who have played over 150 minutes for the Patriots, five are freshmen or sophomores.

With the lack of games and practice sessions during the first month of the season, the Patriots lost valuable time to build cohesion and chemistry before conference play.

This season, in which Mason’s hopes of grabbing an at-large NCAA tournament bid are essentially zero, having a good showing in conference play is critical to having any chance of clinching the Atlantic 10’s automatic bid into March Madness.

Mason has played 11 conference games overall. But not all games are created equal, and this is where Mason is running into trouble.

With the Patriots being a below-average team this season, they need to capitalize on every opportunity against teams also near the bottom of the standings.

But some of these opportunities have been taken away.

In conference play alone, Mason has had four postponements and one cancellation. The matchup against Duquesne was postponed due to “A-10 scheduling adjustments.” The game against St. Bonaventure was canceled due to snow, leaving three other games postponed because of COVID-19.

Of those three lost conference games, two were home games.

The most impactful postponement was a home bout against George Washington, a game in which Mason would have been the favorite according to TeamRankings’ projections. The Colonials have not played a game since Jan. 17 and only have five conference games under their belt due to an elongated program pause.

Mason was also unable to host the University of Massachusetts on Jan. 30. This would have been a winnable game too, as the Patriots defeated UMass earlier this season in Amherst.

The Patriots did get lucky in evading a road game against Richmond, one they almost certainly would have lost.

In a perfect world in which these games are played, the likely scenario would be that Mason went 2-1. That extra bump in the winning percentage could make a big difference at the end of the season.

Currently, Mason sits in 10th place in the A-10 standings. The conference designs its end-of-year tournament so that the bottom four teams do not receive a “bye.” The middle six teams receive one bye, while the top four teams get a double bye.

The Patriots are sitting right on the edge of not receiving a bye in the A-10 tournament, which would dash any hopes of making it to the Big Dance. Right now, they have a half-game lead over George Washington to stay out of what @peteybuckets on Twitter has dubbed the “Wednesday Night Pillow Fight” between the four worst teams in the conference.

The three games not played could make a huge difference in where Mason lands in the conference tournament because the remainder of the schedule looks daunting.

Included in the Patriots’ remaining schedule are matchups on the road against VCU, Davidson and Saint Louis.

Mason is getting a tough break by playing Saint Louis on the last day of conference play because it is something not every team in the conference has to do.

The Billikens were forced into a program pause that wiped seven conference games from their schedule. Saint Louis was picked to finish second in the conference this season and briefly entered the AP Top 25 rankings earlier this year.

The Patriots will still get a chance to play George Washington, but it will be a road game instead of in the confines of EagleBank Arena. This game might determine which team receives a bye and which team doesn’t, so the implications of it are massive.

The Atlantic 10 tournament is scheduled to start on Wednesday, March 3, and end on Selection Sunday, which is March 14. There will be a break between March 7 and 14 to allow for additional COVID-19 testing and travel to Dayton, Ohio, for the A-10 tournament final.

The tournament was relocated from its previous home, the geographically-neutral Barclays Center in Brooklyn, New York, to Richmond, Virginia. The University of Richmond and VCU will co-host the tournament, before heading to University of Dayton. This is yet another set of obstacles created by the pandemic that Mason will have to endure.

If the Patriots are to beat the odds and make a deep run in the conference tournament, they will have to overcome not just their opponents on the court, but the brunt of scheduling changes that gave them the short end of the stick.

RUSH LIMBAUGH, AN ENTERTAINER FOR THE AGES