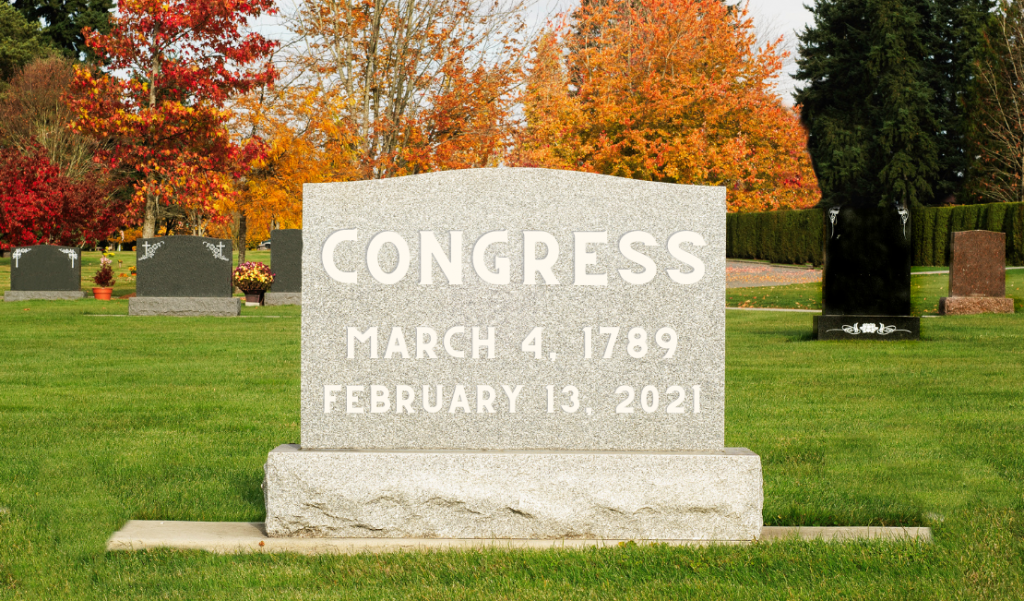 Congress has been in decline for decades. It has conceded much of its power, often willingly and gleefully, and the courts and the administrative state have filled the void. The gradual slide into constitutional irrelevance showed no immediate signs of stopping.

But never did I think I would see Congress’ demise.

This impeachment trial should have come down to a simple fact: The president whipped up a mob, and the mob broke into Congress’ house. Self-respecting human beings don’t take that lightly. Congress did.

It’s difficult to believe given its behavior, but Congress is supposed to be powerful. Article I of the Constitution, which defines Congress’ powers, is one of seven articles, but it contains roughly half of the Constitution’s words. The fear in Philadelphia in 1787 was that Congress would be too powerful, that it would usurp the other two branches. The framers were wise, but they whiffed on that one. They never imagined that members of Congress would be simply uninterested in exercising power.

If a violent mob threatening the physical safety of its own members won’t get Congress to stick it to the executive branch, then what will?

Say what you will about delegating power to administrative agencies or functionally giving up the power to declare war, but this most recent failure takes the cake. The president of the United States — who is supposed to be envious of Congress’ power, not the other way around — incited a mob to break into Congress’ house, and Congress couldn’t work up the indignation to do something serious about it. Even the most passive loser of a man would be upset if someone broke into his house. Congress surveyed the wreckage and said, “Oh well, whatever.”

The House did impeach Trump, but that’s only the start of the process. There was no follow-through. Sixty-seven senators had to convict Trump for him to face real consequences for his actions. Once the article of impeachment passed the House, the goal should have been to get to 67 votes in the Senate.

House leadership appointed only Democrats as impeachment managers, even though 10 House Republicans supported impeachment. If the House was serious about getting Republican senators on board to convict Trump — which was the only way to get to 67, since there are only 50 Democrats and, you know, 50 < 67 — it would have had at least one Republican make the case to them. But every manager was a Democrat. And not just any Democrats: With the exception of Rep. Jamie Raskin, who is widely respected and has some bipartisan appeal, the House went with a slate of hyper-partisans and no-names to argue for Trump’s conviction.

Senate leadership didn’t do any better. After voting to allow witnesses to be called on Saturday, they changed their minds and didn’t end up calling any. We close the book on the impeachment trial still not knowing the details of Capitol Police Officer Brian Sicknick’s death, the details of Trump’s communications during the break-in, or whether there really was a coordinated plan to kidnap the vice president of the United States, all of which seem pretty important.

Fear not: The other two branches of government are doing all the work, as always. The FBI has a gargantuan list of photographs of people it is trying to identify, and U.S. Attorneys from all over the country are charging new people just about every day. Judges in the federal court for the District of Columbia will be doing the sentencing for the litany of cases related to the break-in, and most of the people arrested will be facing time in federal prison.

That’s all well and good (throw the book at the mob, and throw it hard), but we’re supposed to have another branch of government with a role in this process. There’s supposed to be a branch that punishes politicians for violations of the public trust, high crimes and misdemeanors. That branch is supposed to be on guard for the citizenry against a leader who would endanger the Constitution in violation of his oath of office. Especially when, in the words of Sen. Mitch McConnell, “there’s no question” that that leader is “practically and morally responsible” for provoking a violent mob that resulted in five deaths.

At the very least, that branch should have the self-respect to punish someone for sending people to break into its house while it is conducting government business.

That branch was called the legislative branch. It died on Feb. 13, 2021, aged 231. It is survived by the executive and judicial branches. In lieu of flowers, vote every incumbent member of Congress out in 2022.

LET THE RICH EAT THEMSELVES