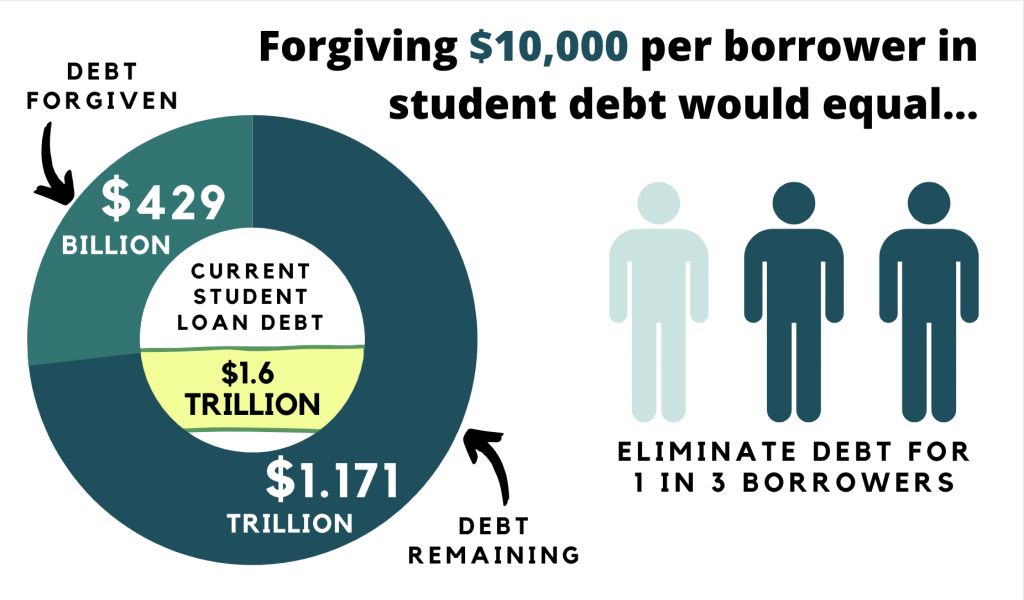 Student loan debt is an approximately $1.6 trillion burden that weighs heavily on the shoulders of roughly 45 million Americans. President-elect Joe Biden has a chance to alleviate some of that burden by taking bold action on the student debt crisis on day one of his presidency.

Since 2006, outstanding student debt has more than tripled in the United States. This increase was likely caused by the slowdown of economic growth and scarcity of employment opportunities during the Great Recession of 2008. High school graduates who would have normally entered the workforce right away may have decided to attend college instead.

Now, in the midst of a pandemic that has wreaked havoc on the U.S. economy, we are experiencing yet another recession that is impacting student borrowers.

Monthly payments for most federal student loans were put on pause in March with the passage of the CARES Act, which gave roughly 42 million borrowers relief during the pandemic. More than 37 million of those borrowers haven’t made a payment on their loans in months.

However, the pause on student loan repayment will end this month and payments will resume again in January. Other federal protections including expanded unemployment and a moratorium on evictions are also set to lapse this month, creating more chaos in what has already been a chaotic economic year.

Biden’s proposal to forgive $10,000 for all borrowers as part of COVID-19 relief could erase loan balances for 15 million borrowers and reduce balances for millions more. This proposal could result in up to $429 billion in debt canceled. For borrowers who owe over $10,000, Biden’s plan may not reduce their monthly payment but could lower the total amount they pay and draw their end date closer.

The proposal would come with a hefty price tag. Taxing people to make up the deficit could negatively impact the economy. But whether the boost from debt forgiveness outweighs the drag from raising the revenue through taxation depends on legislative details.

Student loan debt already puts a great deal of strain on the economy, and while small-scale loan forgiveness might not be a perfect economic stimulus, it could still have benefits.

Under the burden of student loan debt, many have delayed starting a business, buying a house, and getting married and having children. By alleviating some of that burden and allowing borrowers to spend money they would have otherwise paid on their student loans, Biden’s plan could provide an economic and social boost.

Student loan forgiveness or cancellation is also often seen as regressive because it would put money into the pockets of already wealthy individuals. While the majority of student loan debt is held by individuals with a graduate degree, millions of low- and middle-income people still struggle with even the smallest amount of student loan debt. In fact, it’s the borrowers with the smallest debts that often struggle the most.

According to an analysis of federal data by The Institute for College Access and Success, 52 percent of borrowers who default within 12 years of entering college have less than $10,000 of federal undergraduate debt. This is because borrowers with lower debt amounts often do not complete their schooling and are then unable to enter high-paying job fields that require a degree. TICAS found that 49 percent of those who defaulted did not complete their program of study. Defaulting can impact credit scores and trigger collection efforts that can include seizure of tax refunds and Social Security payments.

A blanket $10,000 loan forgiveness is not an ideally progressive move for those who really need it, as the money would still benefit wealthy individuals. But that isn’t a reason to discount it completely. Giving money to the rich does not completely outweigh the benefits of giving money to lower and middle class individuals.

Biden also has a chance to add more progressive elements into his plan by setting a maximum income. The $10,000 is a good first step that could still impact millions of Americans, especially when coupled with more progressive educational policies. Some Democrats are already making noise about more aggressive forgiveness programs, up to $50,000.

And for those who say that the student loan crisis isn’t really a crisis because “the average student loan payment is between $200 and $300” and that it’s just an “inconvenience” (looking at you, Brad Polumbo), let me just remind you that many college graduates aren’t hopping into high-paying jobs — and may never even have one.

In 2019, the average annual salary for students graduating was $51,347, which is roughly where it was in 2000, adjusted for inflation. Meanwhile, the average household with student debt owes about $48,000.

The student debt crisis has also hit Black borrowers particularly hard, with nearly 85 percent of Black college graduates carrying educational debt versus 69 percent of white college graduates. Recent Black graduates also earn about 12 percent less than their white counterparts, averaging $18 per hour. Other race-based wealth and income inequalities like the pay gap compound with student loan debt, forcing many Black borrowers to default or be stuck in debt for much longer than their white peers. Biden’s plan would include complete loan forgiveness for those who attended historically Black colleges and universities and earn less than $125,000 a year.

Biden has the power on day one to take bold action on student loan debt. By eliminating student debt, this administration can take the first step in reducing the racial wealth gap, reinvigorating the economy and reinforcing higher education’s role as a positive, rather than crippling, force in our society.