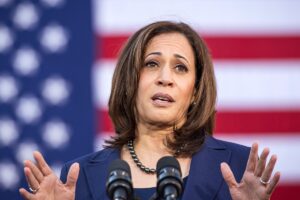 Will Biden/Harris ever work with progressives?

Last Tuesday, Sept. 28, in honor of National Voter Registration Day, Vice President Kamala Harris graced Mason’s campus with a short-lived visit to get students excited about voter registration and encourage voting rights legislation. However, the story does not end there.

Prior to her public appearance in Wilkin’s Plaza, Harris was photographed answering student questions in a Fenwick classroom.

Days after the visit, various right-wing media sources, such as Fox News and The New York Post, pounced on a story which paints one Mason student’s comments surrounding Israel as antisemitic and Harris as anything from indifferent to or accepting of this stance.

Not only is this labeling of the student inaccurate, it is also disingenuous to assert that Harris agrees with the student.

The comment from the student centered around the United States’ foreign policy in relation to the Israeli-Palestine Conflict.

“A lot of taxpayer money is allocated for funding the military … and all this money ends up going to inflaming Israel and backing Saudi Arabia,” the student said.

Then, in echoing an earlier talking point from Harris about the importance of organized demonstration, the student questioned the government’s lack of reaction to protests in support of Palestinian liberation.

Then, the student questioned more recent events when saying, “Just a few days ago, there were funds allocated to continue backing Israel, which hurts my heart because it’s an ethnic genocide and it’s displacement of people.”

First, this student had their facts straight. The student’s claims of “ethnic genocide” and “displacement of people” are justified given the region’s history of Palestinian displacement. In addition, the student mentioned the House’s passage of a recent bill which allocated over $1 billion to fund the Israeli Iron Dome, which passed with a 420-9 majority.

For additional context, all but one of the ‘nay’ votes were progressive Democrats who argue that the United States should not continue funding the problematic Israeli state if we cannot fund domestic public programs. In the time following this, progressives faced criticism for antisemitism as the Iron Dome is largely seen as a defensive structure for Israel.

In response to the student’s comment, Harris stated “This is about the fact that your voice, your perspective, your experience, your truth, should not be suppressed.” She added that “A democracy is its strongest when everyone participates. It is at its weakest when anyone is left out.”

It should go without saying that this is a quite cookie-cutter answer, which aims at appeasing as many Americans as possible. However, the principle of such a statement is a good one as political criticisms like this should not be suppressed.

Still, right-wing media outlets annihilated Harris and the student for this as it provided the perfect opportunity to propagate the notion that Harris, a generally less progressive Democrat, is also antisemitic. After all, this would fit the narrative that the left is becoming increasingly antisemitic as they increasingly critique the actions of Israel.

Rather than remain neutral on the issue as she had during the questioning, Harris’ spokesperson Symone Sanders recently stated, “While visiting George Mason University to discuss voting rights, a student voiced a personal opinion during a political science class. The Vice President strongly disagrees with the student’s characterization of Israel.”

While the vice president has every right to have her own opinion, it feels the very thing she says should not happen to political dissent is happening with progressive issues like these.

In visiting Mason’s campus, Harris came prepared with a speech about the importance of registering to vote, which is popular of course, but then seemed indifferent to concerns of a progressive student until right-wing media bullied Harris into siding with them.

While this is a hot topic, it seems counterintuitive to the notion of improving student involvement in politics that this issue would be swept under the rug, especially by the only American political party even slightly interested in listening.

Essentially, this all comes back to the political differences between progressive democrats and centrist democrats as the ladder are more likely to look for neutrality with, and cater to, the right. In the words of the student, “the people have spoken very often [regarding] what they do need and I feel like there’s a lack of listening.”