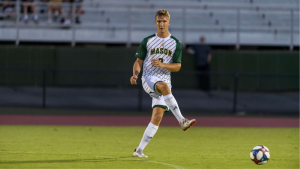 What do a student-athlete from Denmark and I have in common? We both attend George Mason University and love soccer.

I first met men’s soccer player Mads Tranberg in my sports communication course last semester. As we walked down the stairs after class, I complimented him on his shirt and he told me he liked my Sweden national soccer jersey. He later revealed to me that he’s from Denmark, and I quickly noticed that he plays for the men’s soccer team at Mason.

Tranberg plays as a center back for the Patriots. The 23-year-old mentioned that he played right-back in Denmark but had no preference for one position over the other. Back home in Denmark, Tranberg played alongside older center backs, pushing him to utilize his mobility by playing out on the wing. Coming here originally as a foreign exchange student, Tranberg has now lived in the U.S. for three and a half years.

Tranberg and I became friends after our chance meeting and even did a presentation together on U.S. women’s national soccer team’s Carli Lloyd attempting to become an NFL kicker. I have also been able to share some of his stories about his time with the team on air, as part of Mason’s sports broadcasting team.

Tranberg and I often joke about our soccer views. He’s a Liverpool fan and loves to hate on Lionel Messi, while I’m a Manchester United fan, and think the Argentine is the world’s best. We also discussed how his season was going, and more often than not, he was either disappointed with the team’s performance or his injury troubles – in the middle of the 2019 season, Tranberg suffered an ankle injury and missed seven games

We ended up talking after class one day while heading home. Tranberg mentioned he had a host family when he first arrived in 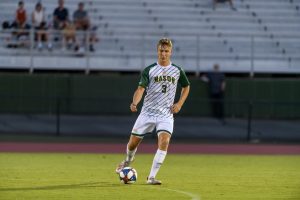 the U.S. and played D-I soccer at the University of Cincinnati before transferring to Mason.

As a senior in his last days at Mason, Tranberg is now focusing on his next step in his life. He played for the D.C. United U-23 team last summer and is hoping to have a stellar last season so a professional team will sign him. He says it doesn’t matter which team — he just wants an opportunity at the professional level.

Tranberg played in the Danish fourth division growing up, but the American professional level is a different echelon.

Tranberg noted how American playing style is more athletic, while the Danish playing style places priority on keeping possession of the ball. Tranberg describes Danish players as “smart guys that have a foundation for the culture because they’ve played soccer from the age of five.”

Fourth Estate sat down with Tranberg.

Start by introducing yourself. Who are you, where you’re from, and what sport do you play?

My name is Mads Tranberg, I play for the men’s soccer team for George Mason University. I am from Copenhagen, Denmark, a small country with approximately 5.5 million people located in the northern part of Europe and a part of Scandinavia. Denmark is also considered to be one of the happiest countries in the world.

Tell us a little bit about yourself.

I am a junior at George Mason University studying sport management. On the soccer field, I am a center back, wearing number five on my jersey. As I said before, I lived in Denmark, [the third] out of four children. I have an older brother, an older sister and a little sister. My brother has also played soccer in the U.S. just as a forward for Santa Monica Community College and my sister studied half a year at Hawaii Pacific University, so my family has always been a big fan of studying and traveling in America. My dad is a pilot for SAS [Scandinavian Airlines] and my mom is a nurse at the biggest hospital in Denmark. I also have a golden retriever named Luca, after the great Italian forward Luca Toni.

When did you start playing soccer and how often did you play as a child?

I started playing soccer when I was 4-5 years old. My dad was the one that brought me down to the local club and signed me up. Ever since, I have been playing as much as possible. And from the age of 12, I [was] scouted to a youth academy.

What is a typical day in Denmark like for a student-athlete?

A typical day in Denmark currently is waking up a bit late so I can match the time difference, which is six hours with my classes in the U.S. — so a lot of the classes are in the late hours of the evening for me. I am mostly [free] the first six hours after I wake up, [when] I have time to train. … I do that by running a lot and also training with my brother up on the local turf field.

The coach has set up a schedule for what we have to do and what our options are for running. Our conditioning coach has sent Google Docs with an eight-week training program that focuses on strengthening the core and other muscles important for soccer. My day, otherwise, goes by like everybody else’s. I am trying to practice social distancing and still focusing on my school work. Otherwise, it’s a lot of just working out on my own, eating dinner with my family and reading books or playing computer games to keep me entertained.

What is a typical day like at Mason for a student-athlete?

How would your life be the same and different if you were living in Denmark right now?

As a student-athlete in the United States, there is a lot more focus on combining school and soccer since the U.S. has school sports. In Denmark, I would not have been able to pursue both a bachelor’s [degree] and soccer at the same time because the school does not care about what you do in your life outside of school. So if I still lived in Denmark, I would have had to choose between pursuing soccer or going to school because it is merely impossible to do both.

Would you prefer to play in Denmark or for Mason?

Right now I am very happy that I can combine school and sports, so I prefer playing for Mason. Mason athletics has a very strong group of people that help me become a better person and a better soccer player. In addition, they are good people with strong personalities that make me feel comfortable in the organization. Despite missing my family and friends in Denmark, it is easy to connect with teammates and other athletes, because we have a lot in common and we all strive to excel in our sports.

How has your daily life as a student-athlete been affected by COVID-19?

The main thing [about] being sent home to Denmark from the U.S. and [training at home] is [that there is a] difference between training with the team and alone. In Denmark, I have to focus more on getting fit and learning about my body compared to the U.S. where we work and train tactics and different soccer abilities. Because all soccer clubs are also closed in Denmark, it is impossible to go out and touch the ball as much as when you are in season or at school. Of course, I can go outside and dribble around but you don’t get the same team training as you do at Mason compared to home.