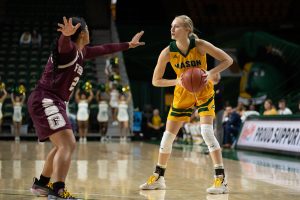 Mason basketball alumni have continued to make strides after their time in the green and gold.

This year, both basketball programs take on two new graduate assistants. The women’s team has picked up Jacy Bolton. Bolton played in 121 games and made her mark on the program.

The men’s team hired graduate assistant Isaiah Tate. The Maryland native played in 114 career games during the most accomplished era in program history.

During his career, Tate played in two NCAA Tournaments (2008, 2011) and in the program’s most recent conference championship win in the CAA in 2008. He assisted in the 2011 tournament run averaging 8.0 points and 7.5 rebounds per game while taking on top-ranked teams such as the Big East’s Villanova Wildcats.

One of Tate’s teammates has also chosen to continue his professional career — Mike Morrison.

Morrison joined the campaign of two NCAA tournament runs with Mason, averaging 8.0 points and 7.5 rebounds in the 2011 postseason. He also notched a double-double with 11 rebounds and 10 points, adding a block and a steal in a win over Villanova in the Round of 64.

Class of 2017’s Jalen Jenkins will continue his career with the Belgian Euromillion League’s Antwerp Giants. After a year with Limburg United, this season will mark Jenkins’ fourth year on the professional level.

Rounding out our list of alumni are two recent graduates. 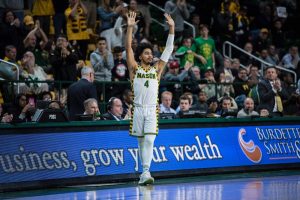 Livingston II also finished his career as the only Mason player to post 100-plus assists in all four seasons. He ranks second in assists in school history (493), third in 3-pointers made (203) and fourth in career scoring (1,865 points).

On Sept. 30, Natalie Butler, a 2018 graduate, announced that she had signed with the A1 National Division team Pas Giannina in Greece.

After she was waived by the WNBA’s Dallas Wings in May 2018, Butler spent part of last season with the Belgian team Belfius Namur Capitale before signing with Romanian EuroCup team ACS Sepsi SIC Sfântu Gheorghe.

During her one season at Mason, Butler made history. Prior to becoming the first player drafted into the WNBA in program history, Butler broke the NCAA single-season rebounding record (563) and tied the NCAA Division I record for most consecutive double-doubles. She also broke the Mason single-season scoring record (653 points).

The Everyday Life of Mads Tranberg