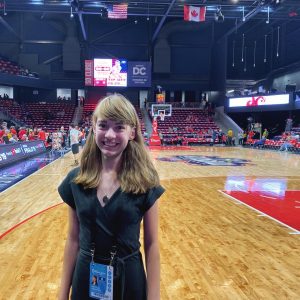 This is my last issue as Sports Editor and I could have never imagined it would end like this.

I foolishly thought there would be sports throughout my time with Fourth Estate and believed that I would be able to attend an NCAA Championship, as Mason was set to host the men’s volleyball one on May 9.

Then COVID-19 happened and everything changed, and I am no longer doing what I love most: covering live sports.

Earlier today I looked at my Facebook memories and saw that it had been two years since the Sports header reappeared on the pages of Fourth Estate.

While I couldn’t have imagined how much I’ve accomplished in the last two years, I’m sad to see my time as Sports Editor comes to a close.

You may be wondering how I got here, so it’s time for a little story that’s been told at some point or another to most people who’ve passed through the newsroom over the last two school years.

As a shy sophomore, I decided to start writing for the sports section. I enthusiastically wrote my first story, a soccer game story, and submitted it early.

Before the story was run I got a text from the Sports Editor at the time saying he and Fourth Estate were parting ways. Looking back I’m glad the story was never published — because looking back it was not good — but in the moment, it sucked.

I was persistent and eventually was able to write sports stories that were published in the News, Lifestyle and Opinion sections and recruited Domenic, our current Assistant Sports Editor, along the way.

My first story and then last feature story of the year were on eventual WNBA draft pick Natalie Butler, who set Mason program records and NCAA records in her lone season at Mason.

Some of my favorite stories were written that year because I got to cover the women’s basketball team’s historic season, but that was only the beginning.

While I’ve edited more stories than I could count, I’ll give you all a rundown of some of my favorites.

First up is Domenic Allegra’s two stories on Jacy Bolton, the first from September 2018 and the second from the end of her senior season.

A special shoutout for his first story, which was the first sports story I was lucky enough to edit. He compared Loyola-Chicago’s Final Four Run to Mason’s and I highly recommend you read it.

Next up is Ross Shinberg, who I’ve gotten to watch grow over the past three semesters and who has written two of my favorite features, the first on senior softball pitcher Marina Vitalich and the second on Mason’s single-season blocks record holder AJ Wilson.

One story I absolutely loved from Zach Seay came about six weeks into my experience as Sports Editor. Jewel Christian returned to Mason for a final year of collegiate soccer, fulfilling a dream she had. It’s one of the most unique features I’ve gotten to edit and one I’ll remember for a long time.

Earlier this year, Conor Forrest summarized the 2019 NFL season in a way I never knew was possible.

And last but certainly not least, I must give a shoutout to Faux Estate extraordinaire and Fourth Estate’s Art Director Ally McAlpine, who wrote my favorite Faux Estate story ever: “What fabric should sports uniforms be made out of?”

Fourth Estate has given me the journalism foundation that has led me to both internships and paid opportunities, and I only wish that my time as Sports Editor could have lasted a little bit longer.

While I won’t be gone entirely — assuming there are sports at some point next school year, I’ll be around covering them — it’s time for me to go … and work on my thesis, though I’ll never forget the stories I’ve edited and the people I’ve gotten to work with at Fourth Estate.