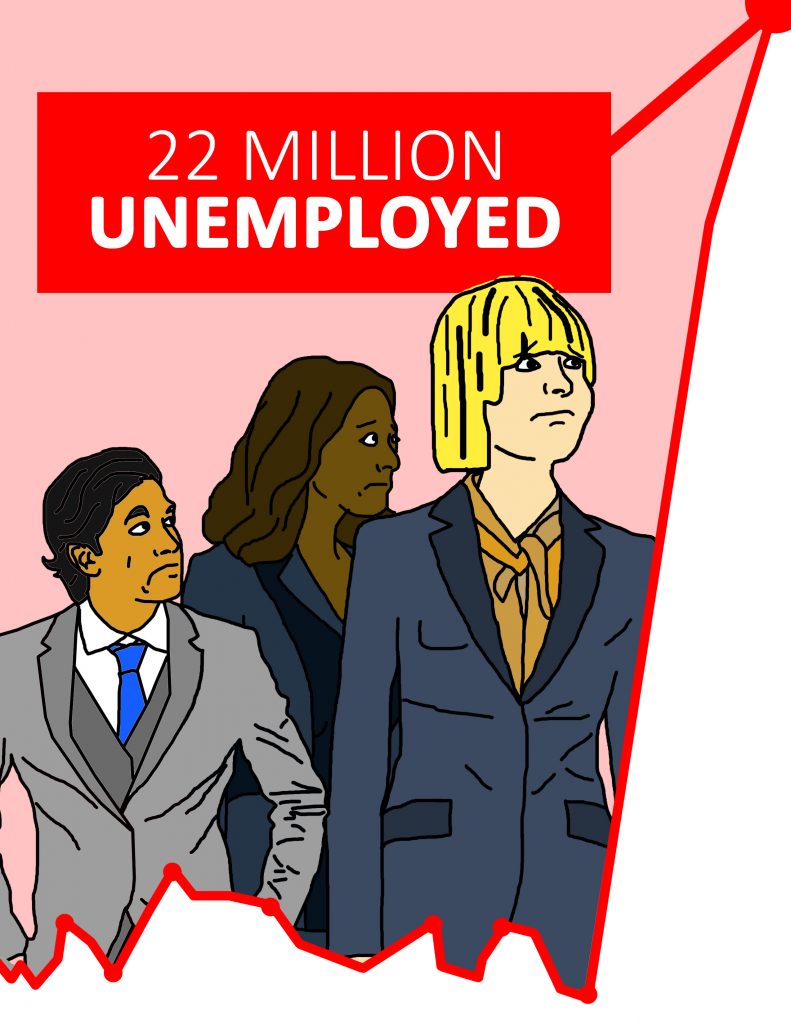 Due to recent stay-at-home orders closing businesses and inducing mass layoffs, unemployment insurance filings in the U.S. is at an all-time high. In three weeks, 17 million Americans have filed for unemployment benefits — and this doesn’t include millions more who are unemployed but are either ineligible or otherwise unable to file for benefits. The Federal Reserve Bank of St. Louis theorized that over 30 percent of all Americans might be unemployed by the end of June if the current situation continues.

In New York, over 200 times as many people as normal called into the N.Y. unemployment hotline, overwhelming their system, crashing their website and preventing many individuals from accessing unemployment benefits. Similarly, in Nevada, one recently laid-off worker had to call over 100 times before even getting through to an automated message, which then told her that there were no more appointment slots available that day. In Connecticut, those who were able to apply for benefits have still not received them despite being jobless for weeks, due to the unemployment computer system being unable to handle so many distributions.

The current zealousness in support of lockdowns and mandatory stay-at-home orders isn’t helping the situation. Despite take-out and delivery options, restaurants saw an over 30 percent decrease in revenue in March. Almost 25 percent of all small businesses have shut down already, with research suggesting that this number could increase to nearly half of all small businesses closing their doors if things don’t change within six months. College students are hit just as hard, with the loss of most on-campus jobs and student work-study income as colleges are forced to close.

Stay-at-home orders are certainly important to combating the spread of coronavirus. But in many cases, the push to lock down comes from legislators who are privileged enough to be able to work from home and continue earning an income. In the meantime, those who are less fortunate and depend on in-person, “non-essential” work to earn a living are given the short end of the stick. It’s become a subtle and unspoken form of oppression, deepening the divide between the rich and the poor, between the privileged and the less fortunate.

I’ve been lucky and am one of the privileged ones. My income hasn’t been directly impacted by Virginia’s stay-at-home order, and I can continue my work remotely. I implore those of you who are not directly financially impacted by these far-reaching closure orders and directives to pledge with me to support the hourly workers and small businesses who are directly suffering from the coronavirus response.

For example, you can pledge to continue eating out (via take-out), shopping and spending discretionary income in the same amount as you normally do. You can pledge to implore local and state government leaders to allow small business owners and hourly workers to return to work as soon as possible. You can pledge to spend money you receive from the stimulus package to directly purchase from and provide revenue to the businesses suffering the most from the shutdowns.

Even after it’s finally safe to lift these measures, the impact of our choices in the past few weeks will not immediately go away. Economists surveyed by Bloomberg believe that the U.S. won’t return to its normal economic output until mid-2022, and unemployment won’t return to a more normal 5.4 percent until 2022.

It’s not too late. We can still flatten the curve. Let’s keep supporting the hourly workers and small businesses as long as possible before they’re forced to close down, giving the unemployment system time to provide much-needed support.

All the details on Mason Men’s Basketball Roster Changes