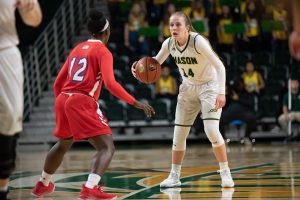 On March 17, women’s basketball head coach Nyla Milleson announced that the star point-guard would not return to the team next season.

Milleson said in her announcement, “[Cardaño-Hillary] has been a great representative of our program and a pleasure to coach. We wish her the best as she moves forward to finish her career.”

In the same statement, Cardaño-Hillary thanked the Mason community and the team. “This is a new opportunity that I very much look forward to, and owe so much of that to the experience I’ve had at George Mason,” she added.

The point guard from Madrid, Spain, averaged 34 minutes per game, along with 18.7 points, 4.3 rebounds, 3.1 assists and 2.4 steals per game over her three years in Fairfax.

Entering the 2019-20 season, Cardaño-Hillary was one of twenty players placed on the “Nancy Lieberman Award Watch List” which highlights the best point guards in women’s NCAA Division I basketball.

Cardaño-Hillary departs Mason as the school’s all-time leading scorer in women’s basketball history, a mark which she attained during the final game of the 2019-20 season. She finishes her time at Mason with 1,766 points.

Additionally, Cardaño-Hillary ranks in the top five in three-point shots made and steals, and ranks tenth in assists in Mason women’s basketball history.

On April 9, Cardaño-Hillary announced in a tweet that she would transfer to Indiana University.

On the men’s side, Douglas-Stanley, a sophomore guard from Mount Vernon, N.Y., announced on his Twitter account on March 19 that he is entering into the transfer portal.

He made his most significant impact on the team during his freshman season when he averaged 9.1 minutes per game and scored 2.0 points per game.

Douglas-Stanley ended the 2019-20 season strongly, posting season-highs in minutes, points, rebounds and three-point field goals made on March 7 at Fordham.

On Mar. 24, Douglas Stanley announced in a tweet that he would transfer to Manhattan College.