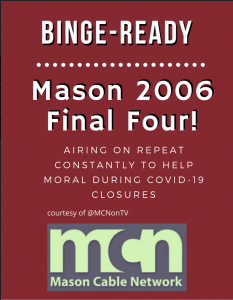 On March 32 Mason Cable Network (MCN) announced that in the wake of the cancelation of all major sporting events in the U.S., the station would re-air the men’s basketball’s 2006 Final Four until sports returned. Hopefully, this will be in the fall semester (don’t want anyone getting too sick of the games).

You can hardly watch a Cinderella team, a major upset, stories regarding the best moments in March or a Mason basketball game without a mention of the 2006 Final Four run.

With the 14th anniversary of the Final Four run coming just last week, there would be no better way to celebrate, except with cake and balloons and a large social gathering. Unfortunately, we really don’t have that option right now, due to the global pandemic.

MCN will take halftime breaks to pan to head coach Dave Paulsen furiously taking notes on how to replicate the buzz and magical run, hoping to use the material during the next Atlantic 10 Tournament, assuming it is played in full in 2021.

Other halftime content will include interviews with Final Four players who are scattered around the globe (also practicing safe social distancing because, again, there is a global pandemic going on right now).

When one set of games ends, there will be a five minute period of celebration and a postgame interview montage before it all starts again. This programming content will most certainly make time pass more quickly and definitely won’t make each day feel painfully similar to the last 12.

This schedule will continue indefinitely.