Graduating seniors create platform for distribution and communication during pandemic 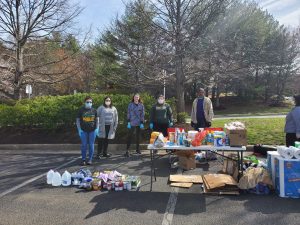 As U.S. cases for COVID-19 continue to climb exponentially, panic seems like a reasonable response. Citizens from all across the country have been told to remain at home indefinitely in order to mitigate the spread of the virus.

Two graduating Mason seniors have chosen a different response. On March 13, social work majors Rachel Pichon and Maricza Hinnah created a Facebook page, the Northern Va COVID-19 Craziness Supply Exchange, that connects people from across the region to supplies that are essential for life during the pandemic.

In the panic surrounding the coronavirus, Pichon and Hinnah have found a way to create a bit of certainty for the people of Northern Virginia in a time where few things seem certain. Members in the group post items that they are currently having a difficult time finding, and others share locations where items like toilet paper and hand sanitizer can be found in the area.

Additionally, the two students have organized a few donation drop offs held at different locations in the Northern Virginia area, which are often live-streamed by Pichon from their Facebook page. So far, the group has organized two different events, one in Mount Vernon and another in Woodbridge.

“Rachel is actually the one who, I would say, had the idea to create the page,” said Hinnah. “She kind of reached out to me about it, asked me what I thought and we kinda worked together, collabed to see what we could do during this time of crisis.”

“I think we just really wanted to reach out to the community to see how we could help people connect with each other,” Pichon added.

The two have really found the group to be a place to funnel some of their anxious energy in a way that is also contributing.

“The more that we help other people, the less anxious we are about what’s going on,” Pichon said. “I think a lot of people want to help other people, but they just don’t have an outlet. So, we’re just really trying to connect … For me, I feel useful just saying, ‘Hey, I went to the store and there’s no toilet paper,’” she said.

In a short amount of time, the group has rocketed to around 14,000 people as of Friday, March 27. According to Pichon and Hinnah, the group has received attention from several professors in the social work department along with the College of Humanities and Social Sciences.

However, running a group of that size has come with its own challenges.

“Sometimes, it is like moderating 14,000 adults,” Pichon said. “We get so many people kind of telling on each other and we had to really look through the group [because] people were just posting really negative things, and we’ve been working really hard collaboratively to just try and eliminate that stuff,” Pichon said.

When discussing Mason’s reaction to the pandemic, both students, who are in their last year, stood behind the actions taken by the university.

“For me, the only downfall is not being able to walk [at commencement]. I was really looking forward to that,” Hinnah continued. “So when we received that email that it was no longer going to happen, I was really in my feelings about that.”

For Hinnah, the highlight of their project so far happened at their most recent donation event.

“Last Sunday, we had a family come out. It was a young single mother, I believe, she had four children and they were just kind of going through the line that we had, picking up things. And there was this little kid, he probably was maybe 3 or 4, and he was picking up a can of SpaghettiOs and his eyes were just full of tears … He was so excited about it and it was very heartwarming.”

For now, the group is planning on conducting a donation drive every week, with the next one being held in Annandale on March 29. Additionally, the two students think that it’s important to honor the sacrifices made by essential workers.

“[We’d like] to give them gift cards or something, to show that we appreciate that they’re still out there doing what they’re doing,” Hinnah said.

“Imagine” a Concert at the CFA