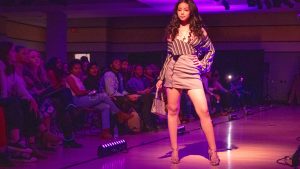 In the form of a fashion show, the Black Student Alliance (BSA) used its platform to not only showcase its impeccable style but also pay respect to ballroom culture. The organization highlighted the outstanding fashion within the rich history of Mason’s Black community.

The show was held in Dewberry Hall, starting at 8 p.m. on Thursday. The audience was met with a grand catwalk lit by a line of color-changing lights and a spotlight at the end for the models’ brilliant poses.

The show opened with a clip from the Viceland show “My House,” a reality series about a group of ballroom dancers in New York City. After the clip, the lights came up and “Changes” by artist Dej Loaf played as the models strutted onto the walk.

Ballroom and vogue trace their roots through Black and Latino history. Drag culture evolved, largely, in New York City, where ballroom events and the creative dance form known as voguing became popular. According to the National Museum of African American History and Culture, the late 20th century saw the evolution of ballroom culture from simple drag competitions to more nuanced and complex vogue battles.

Mya Billingsley, a sophomore government and international politics major, is the social programming chair of the BSA. To her, portraying the theme of the ballroom was a priority.

Later on, they danced down the catwalk, voguing and performing choreographed dance numbers to the beat of the music. Audience members cheered the dancers on, especially when one of the performers flipped down nearly half of the catwalk.

According to Raelyn Wesley, a junior forensics science major, there was a lot of effort that went into the performances. “We worked day and night to get the dances down for the show,” Wesley said.

Wesley stunned the audience when she walked down the catwalk in her yellow top and black and white skirt, representing the “refreshed” theme.

“Most of the things for the fashion show [were] thrifted because I wanted to use sustainable fashion and make it more realistic for how they do it in the balls,” Billingsley typed in an exchange with Fourth Estate. “Every scene represented something different: ‘70s, ‘90s school girl and 2000s fashion. I’m really happy with how the show turned out.”