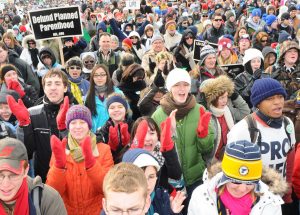 Do you know what one of the biggest annual human rights demonstrations in the nation is? It has taken place every year for over 40 consecutive years. Every year, thousands of people converge to one place. Everyone gathered shares a similar mindset on improving the condition of a particular group of people.

The answer is the March for Life in Washington, D.C. The Women’s March may have been the largest gathering in Washington, but that was only in 2017; ever since then, attendance has plummeted. Even though approximately 250,000 gathered to hear Martin Luther King Jr’s “I Have a Dream” speech, it was a one-time event.

This year alone, Students for Life estimated 225,000 people participated in March for Life. They’ve had attendees arrive in the thousands in previous years, even during a blizzard. Many media pundits have opinions about who is at the march and what it’s like there, but as an attendee for the last two marches, please allow me to share what I’ve personally observed.

Contrary to some uninformed presumptions, there is a large female population. The theme of the march this year was “pro-life is pro-woman,” the leadership staff of the march is 90 percent female (including the president of the organization, Jeanne Mancini), over half the speakers were female, and the march was led by Catalina Scheider Galiñanes, a female high school student.

They had prominent civil rights leaders such as Martin Luther King Jr.’s niece Alveda King, Louisiana state senator and pro-life Democrat Katrina R. Jackson, and abortion survivor Melissa Ohden at the march. Every year outside of the Supreme Court, the march features women sharing their stories on why they chose life in the most extreme circumstances. What made this year’s march unique is it was the first time in history a sitting president personally attended and addressed the attendees.

As you read this, you may be thinking: “Why didn’t this idiot of an author include sources from more ‘credible’ outlets?” After we skip over a quibbling argument over what is a credible source, my response is simple: The March for Life is arguably the most underreported annual mass demonstration in American history.

Take the New York Times coverage of the event. Not once do they mention crowd size. Instead, most of the article is dedicated to Donald Trump rather than a report on what actually happened at the event. The only comment they got from a female pro-life attendee was on — you guessed it — Trump’s impeachment.

Please, don’t take my word for it. Go to the march yourself. Don’t be afraid to have a conversation with someone on abortion. Ignoring the issue only weakens and divides us more. The basic question we must confront is: Does an abortion end a human life? If not, then we must use logic and empirical evidence to explain it to the skeptics. If so, it is a reality we need to confront.

Since 1973, over 50 million potential scientists, leaders, entrepreneurs, artists, and would-be friends in the U.S. will never have voices because of abortion. That’s why I march and will always march until women with unexpected pregnancies are cared for, children are brought up with love and abortion becomes unthinkable.