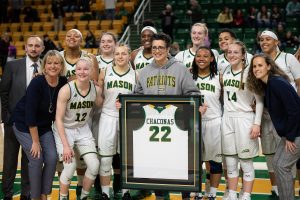 Head coach Nyla Milleson and players Marika Korpinen and Jacy Bolton all had smiles on their faces at the post-game press conference. For the first time in a month, the Patriots were back in the win column.

The team snapped an eight-game losing streak after defeating UMass 73-56.

“I am just so incredibly proud of this basketball team,” Milleson said to open the press conference.

She went on to credit her players, saying, “They’re coming in and believing in the process, even when the process is tough and it doesn’t look like the process is headed in the direction we want it to head, but they just continue to believe. And tonight I don’t even know what the shooting percentage [was], I couldn’t tell you anything other than a win but I do know we shot better.”

Three upperclassmen really stepped up for the team Wednesday night. Bolton, Korpinen and Nicole Cardaño-Hillary had 16, 17 and 17 points respectively.

Korpinen shined in the first half, providing the team with an offensive burst that helped the Patriots create a lead. She also hit three free throws to extend the lead to 17 midway through the fourth quarter.

“We were just moving the ball really well. I just got into the flow of the game,” said Korpinen.

She added, “I got pissed off after the Rhode Island game because I could not make anything. I’ve been shooting outside of practice. I probably spent probably two, three, four hours in the gym just getting shots up because I’m telling you I’m never going to miss that many shots again.”

Bolton was able to provide a spark with her three-pointers, making three of them at critical points in the game.

Cardaño-Hillary did not shoot well from the floor but was able to make free throws down the stretch to keep extending Mason’s lead.

Mason has struggled offensively recently, including putting up just 42 points against Rhode Island on Saturday. To bounce back, the team scored 42 points in the first half Wednesday night.

The offensive turnaround was critical for the team, who used that momentum to create plays on the defensive end.

Korpinen and Bolton were both excited to win, but knew the victory meant much more.

“First of all, it feels great, but it just shows that when we continue to trust the process and trust the game plan that good things are going to happen,” Bolton said. 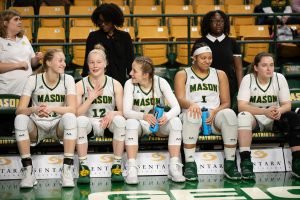 Korpinen added, “It really means everything. I mean, it’s not been easy all season, but having the teammates who always are there for me and believe in us, and the coaches. And eight losses is not easy, but Coach M [Milleson] has been leading us and believed that we got it in us.”

This win had one more meaning: It came on National Girls and Women in Sports Day, and this specific home game was dedicated to Sue Collins, a long time member of the Mason Athletic department who died in 2018.

Collins was a champion of female athletes and was integral in ensuring gender equity in athletics, not just at Mason but at schools around the country.

The meaning of this was not lost on any of the women at the press conference.

She also had her team turn around and pay attention to the young girls sitting behind the team’s bench, reminding them that they are indeed setting the stage for the younger generation.

Bolton added, “I love this day because there are a lot of girls that get to come to our games and there’s one in particular, that little girl Frankie, who sits behind our bench. She, no matter what happens during the game,she gives me the biggest hug afterward and at the end of the day that’s what this is all about. And I’m just trying to use my platform as a student-athlete to inspire other little girls like her.”

Korpinen had similar feelings about the game today, but for her it stretches an even wider net. She wants to be an inspiration for girls in Finland who play basketball.

“I know coming from Finland, basketball is not a big thing. Not at all. I think I’m the third person from my hometown who has ever made it to the United States to play basketball,” she said. “So I know there’s a lot of eyes just watching us and I want to be there to inspire the next generation. When I go home I want to go to practice and show them this is what we do, this is how amazing it can be. And so, days like this just remind us how really important we are.”

Who Am I to Decide What You Buy?