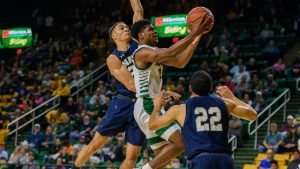 Men’s Basketball started off their second game of the season with another win.

After getting off to a strong start Mason defeated Longwood, 76-65.

Mason started this game by going 15-0. However, the lead soon started to evaporate. With three minutes remaining in the first half, the Patriots let off the gas, allowing Longwood to go on an 11-1 run.

After starting incredibly strong, the Patriots finished the half with only a 33-22 lead.

Head coach Dave Paulsen gave his thoughts on when Mason took the early lead. “So our guys think I’m probably crazy, but, when it was still 15-0 out it was a defensive clinic. And then we gave up some looks that they missed. But it was kind of fool’s gold; if you give that team those looks, if they can play the way they want to play, they’re really dangerous.”

He continued, “I think at times offensively when things come a little easy then guys … forget why it was easy because of our execution. I’m a perfectionist and I apologize for that, but that was a way to be energized and focus from the start.”

“Now I let [my bad start] get to my head,” Greene said. “Haïdara shocked me because he came to me and we were just going to the locker room, he was like ‘Yo pick your head up.’”

He continued, “Ian [Boyd] did the same thing and so did Justin [Kier], so it’s going down the line, I feel like that kind of helped me go into the second half with the different mentality. I let the game come to me.”

Greene finished the game going 6-8 from the floor, 4-5 from behind the arc and with five rebounds.

This is the only category the Patriots were lacking tonight. While they did defend the three-ball in the first half, the defense on the three-point line vanished in the beginning of the second half.

The Patriots held the Lancers to 20 percent from behind the arc (3-15) in the first half. However, the Lancers finally woke up and started to make multiple threes.

The Lancers finished with seven threes made (out of 16 attempts) in the second half, 10 threes in total. Longwood was able to get open in the corners of the court for open shots.

If it was not for Javon Greene, Mason could have easily lost this game.

Mason’s next game is at home on Wednesday, Nov. 13 against LIU Brooklyn.

Men’s basketball opens the season with overtime win over Navy