Student Government is responding to students’ discomfort over the word “toads,” which has been associated with alleged racist connotations. “TOADS” has been written multiple times across campus over the past two years in chalk.

From there, Student Government leadership — as well as the Chair of Diversity Shelby Adams — discussed ways to handle the situation. 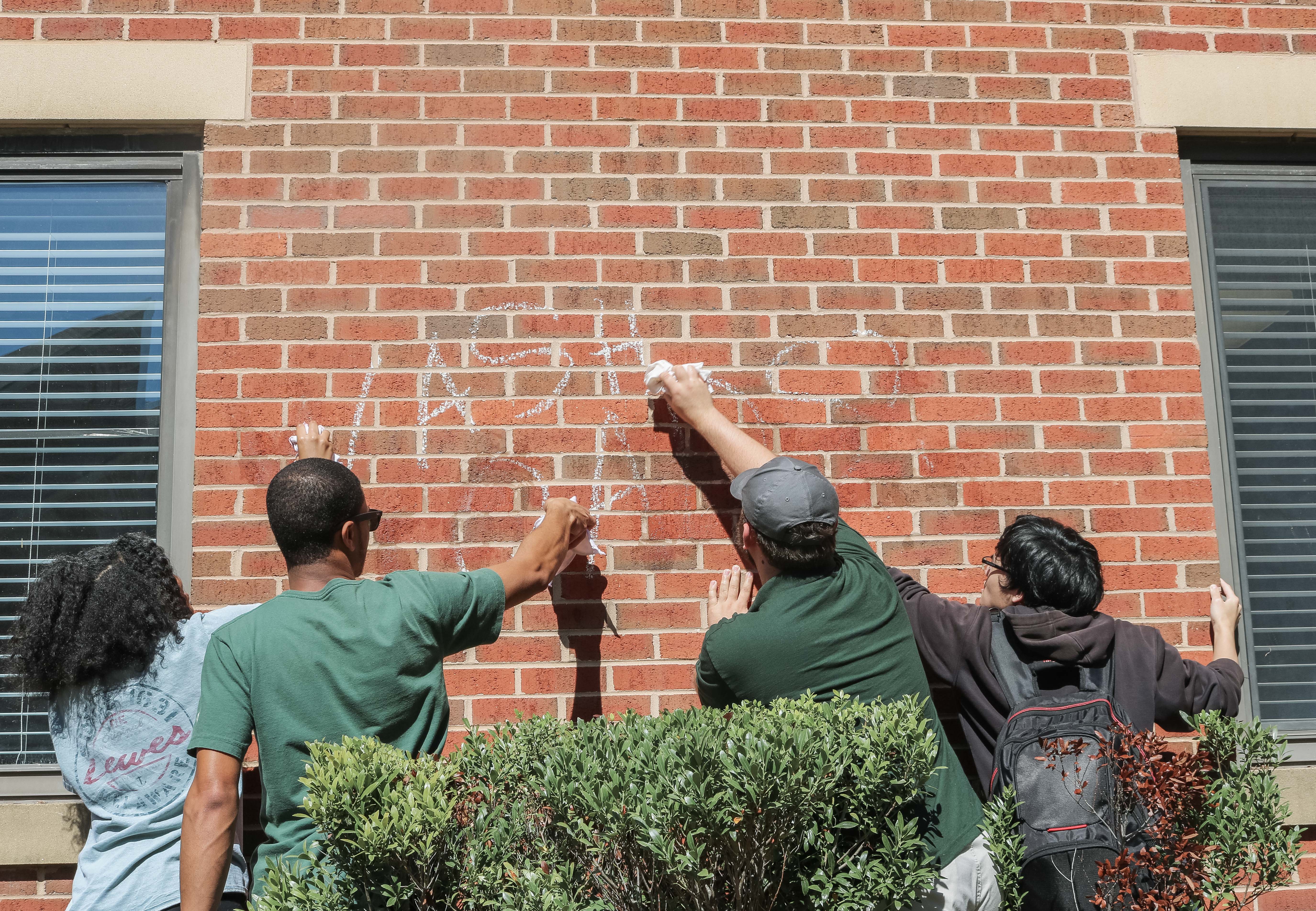 Members of Student Government held a meeting with leaders from several black organizations, including BSA, NAACP, and Black, African-Heritage, and Caribbean Coalition (BLACC) to hear their concerns on Wednesday, Sept. 25.

Dominique Dowling, president of Mason’s NAACP, expressed that she is happy student voices were heard  and that “[Student Government] was very considerate of how we as a community felt.”

Following the meeting, Adams and Speaker of the 40th Student Senate Cedric Price wrote a resolution to address concerns.

Adams revealed that they were uncertain of the motive behind “toads” being written on campus and “[didn’t] want to say it was definitely racially motivated.”

She added, “What I do know is that, whether this is a joke or acronym, this is affecting the black community. That’s why it needs to be addressed.”

The resolution was unanimously passed on Thursday Oct. 3 by the 39 present Student Government senators.

Layton stated that he “assumes there were no ill-intentions when [the writing of toads] started … [but] if [a] community feels impacted by it, we should be working towards eliminating that.”

Steven Bredin, a senior at Mason, has come forward as the alleged creator of “toads” to explain his intentions behind the chalking. Bredin said he’s been writing the phrase across surfaces for years, even before coming to Mason.

Bredin said that he first started writing it across campus after a large windstorm two years ago that blew shingles off buildings. The day after this storm, he picked up shingles and spelled out “toads” with them, and placed them on Wilkins Plaza. He has been writing them on other surfaces across campus since then. Bredin said that he had no knowledge of its racist connotations until last year when people he knew started approaching him about it.

“I realized that some people were taking it the wrong way and exactly the way I didn’t intend it,” he said. Bredin acknowledged that he knew people would misinterpret it, but not in the way that he thought. He said he had thought people might be confused or find it funny, not offensive.

Bredin allegedly started it because of his fondness for amphibians. He is currently studying to be a herpetologist (a snake biologist).

Bredin said that after he found out that his “toads” message was being misconstrued, he stopped writing it. He hopes to find another way to get his message across that is not offensive to others.

“I do not want to do something if it hurts people, but I still really like toads and frogs and want to get that message out,” said Bredin.

According to Bredin, any current chalking was not his doing; he has not written the message across campus since last semester after he learned of its racist connotations.

A press release regarding the “toads” vandalism and impact is expected to be published online late Monday by Student Government. 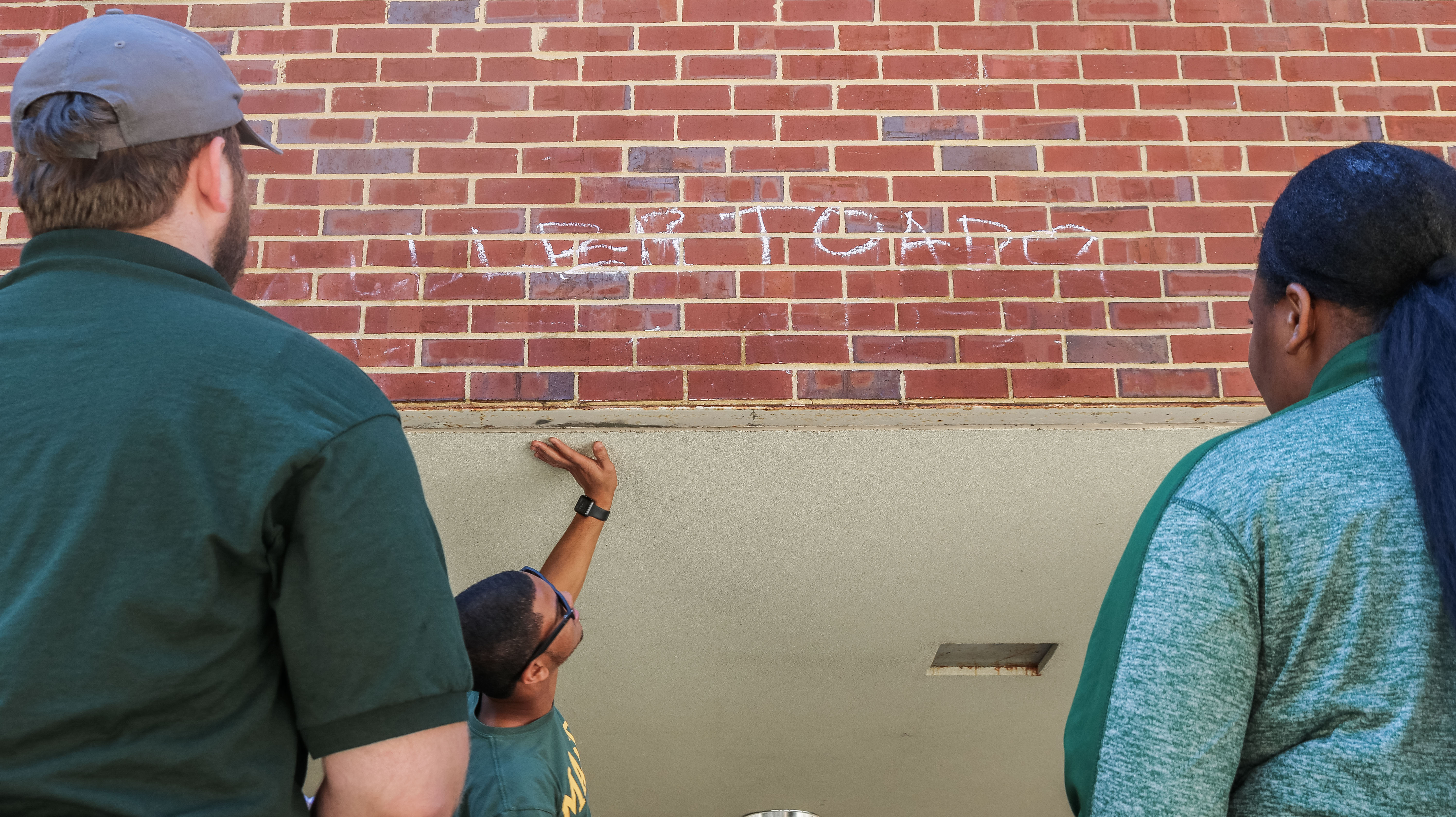 “Chalking is still vandalism,” Joe Pagan, a sophomore student senator, explained during the cleanup. As such, he explained, an “inkling of anything derogatory” being written was sufficient reason for its removal.

Steve Vollmer, assistant director of operation of Facilities Management, confirmed that two work orders were filed on Sept. 19 and 20, respectively. Both instances were cleaned off by staff shortly after, according to Vollmer.

Vollmer also expressed that Facilities Management had no prior knowledge of the meaning behind the graffiti. Vollmer said that he “will make an announcement to staff to be on the lookout for this particular type of graffiti and to report it.”

The Enslaved People Memorial is a Beautiful Balancing Act