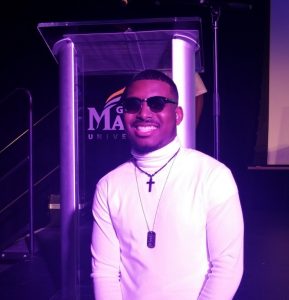 WHICH CAME FIRST, RAPPING OR SINGING?

It was singing that came first. I was in a play at my church when I was mad young, like 9 years old. And I was the lead for the play and so I had a solo performance at the end of the play. I remember thinking I did really good, and then the church like gave a standing ovation at the end, so that was the first time I really enjoyed singing and wanted to get more into it. So I started singing in chorus in middle school and high school.

Rapping was definitely more of a spur of the moment thing. My friend Titus, my brother Cullen and I just figured it would be cool to start rapping in middle school. I was always a better singer than rapper, so I stopped rapping after middle school while continuing to sing. But literally last year I was like, ‘What the heck?,’ and figured I [would start] rapping again, as my sense for lyrics and beats and what works for me changed over the course of like six years, so I was so much better than I was in middle school.

I don’t believe I really found any inspiration to rap or sing when I started doing it. Of course, there were people that were [doing] it that I thought were cool, but I would say I was more inspired by myself to do something new. One, because I was kinda talented and I thought it could go a long way, and two because literally everyone wanted to rap in middle school. I was just one of the guys who actually did it.

HAVE YOU EVER BEEN SCARED TO PERFORM IN FRONT OF A CROWD?

So, as someone who did theater and chorus for all of middle and high school, being on stage just became like second nature to me. But it’s different when you’re by yourself and you’re showcasing your talents, and you want people to like and appreciate it. So I still get a little bit nervous sometimes. That’s why I gotta get the adrenaline going before I go out there because it helps a lot.

ARE THESE JUST HOBBIES, OR DO YOU PLAN ON TAKING IT TO A PROFESSIONAL LEVEL ONE DAY?

Of course. Everybody who does music has dreams of taking it to a professional level, to make it something they’re really known for, and I’m no different. But I don’t know if I can put the time and find the resources to really go after making music the way I really want to. So I’m content right now with it just being a hobby, even if it’s the most fun hobby I have.

WHAT HAS YOUR BEST PERFORMANCE BEEN AT MASON?

I got to perform at the Black Excellence Gala last February and that was definitely my favorite performance, if not the most impactful performance I’ve had. It opened the show. The crowd was into it. My lyrics spoke a truth that they normally don’t speak about in my music. I had a speed painter Amini Bonane doing her thing beside me. Everything really just came together perfectly for the performance.

DESCRIBE YOUR TASTE IN MUSIC.

My taste of music is all over the place, honestly. I’m not gonna say I listen to everything because I don’t. But I love hip hop and R&B. I vibe with pop, some alternative rock, old jazz, the ‘60s and ‘70s soul, funk. I really have my foot in a lot of genres, and I feel like I take a piece or aspect of those genres in my mindset when I’m trying to create music.

IF YOU COULD CREATE A SONG WITH ANY SINGER, WHO WOULD IT BE?

With any singer dead or alive, it would definitely be Prince. He is the most enigmatic performer of all time. So, just to be in the studio with him would be a blessing. But in today’s time, I would say D’Angelo. He’s the standard for the type of music I would like to make. 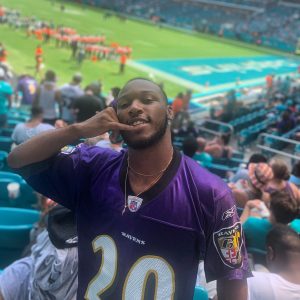 SO, HOW IS POST-GRAD LIFE?

Post-grad life is actually pretty boring. Once you find a career path, you will get into the routine of doing the same things over and over again, so your days tend to run together. With being a post-graduate, there also comes other responsibilities that I have like paying my own bills and being accountable in the workplace.

HOW LONG DID IT TAKE YOU TO LAND A JOB AFTER COLLEGE?

I acquired a job a few months prior to graduating. Initially, I was seeking to continue my career in computer programming as a software engineer, but trying to work for the government is a long process. In the meantime, with the connections that I have through wrestling, I was offered the opportunity to work in finance with my coach’s wife at Greenleaf Health, Inc. Greenleaf Health is a small consulting firm that specializes in maneuvering through the FDA [Food and Drug Administration] process.

WHAT IS YOUR CURRENT PROFESSION?

My current profession is working as an associate director of finance and operations. My main role is to make sure that all of our transactions are documented and precise in case the company gets audited.

WHAT IS THE MOST STRESSFUL PART OF YOUR JOB?

The most stressful part of my job is learning the new terminologies of the job. Accounting and finance are both foreign to me considering that I have a background in technology. Also, my company deals closely with the FDA, where you have to know certain terminologies that pertain to the company which can be challenging to remember.

DO YOU HAVE ANY FINANCIAL ADVICE THAT YOU COULD GIVE CURRENT UNDERGRADUATE STUDENTS?

The advice that I would give undergraduate students at Mason is to stay home if possible. Cook food at home as opposed to spending your money on food from restaurants often.

I SAW ON YOUR INSTAGRAM THAT YOU HAVE BEEN TRAVELING A LOT LATELY. WHERE WAS YOUR LAST ADVENTURE?

The last trip that I went to was Miami, Florida. This trip was a graduation present to myself. During my time there, I was able to watch my favorite football team, the Baltimore Ravens, play a game. I also enjoyed the nice weather, the beach and the night-life in South Beach, Miami.

WHAT WERE YOU INVOLVED WITH AS AN UNDERGRADUATE?

Outside of the classroom, I was a Division 1 wrestler on campus, where I was a captain for three years. Wrestling took up most of my time during Mason, but I was also involved with the National Society of Black Engineers (NSBE) and joined the service-based fraternity Omega Psi Phi Fraternity, Incorporated.