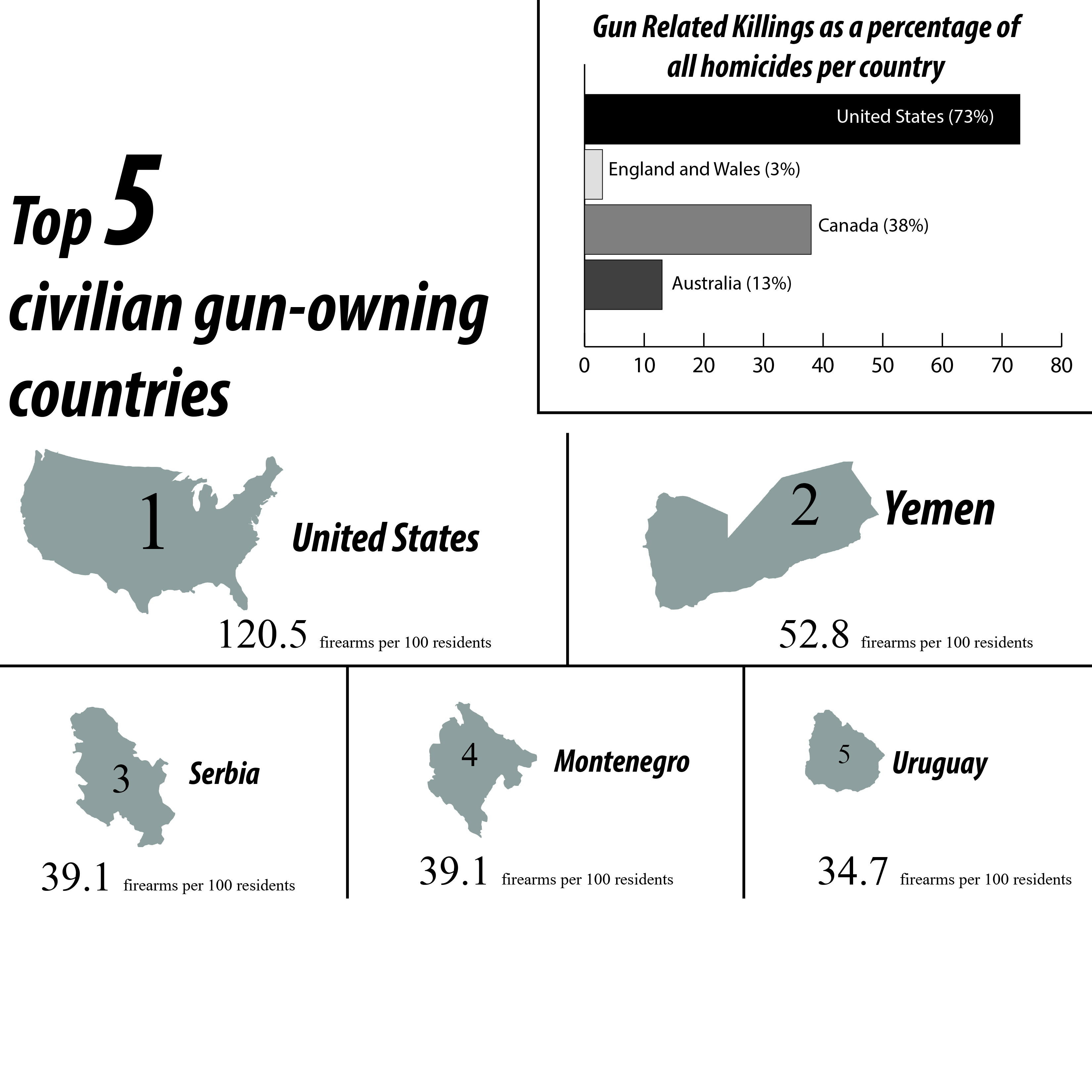 In the 24 hours between Aug. 3 and Aug. 4, 29 people were killed and 53 were injured by firearm-wielding home-grown terrorists.

The Gun Violence Archive (GVA) defines a mass shooting as any incident in which four or more people are shot and/or killed in a single event, not including the shooter. The Aug. 4 shooting in Dayton, Ohio marked the third mass shooting of the week and the 295th mass shooting in just 216 days of 2019.

The bloody aftermath of the shooting this past Saturday in Odessa, Texas, then, was an all too familiar scene. By the GVA’s definition, the death of seven individuals in Odessa marked the 340th mass shooting of 2019. America has become a nation plagued by the highest rate of homicides by firearm in the developed world.

Suddenly desensitized to these mass killings, society has normalized shootings. Coverage of such large losses of life barely lasts a week in the news cycle, with much discussion around gun policy occurring in a single day, before the story disappears completely. Many are not even covered at all.

But mass shootings are getting harder to ignore as they become more frequent and more deadly. Eight of the last ten deadliest mass shootings in the United States have happened in just the past ten years.

In November of last year, the American College of Physicians (ACP) even published a paper that stated, “Firearm violence continues to be a public health crisis in the United States that requires the nation’s immediate attention.”

Following the publication of this paper, the National Rifle Association (NRA) tweeted at the ACP, telling them to “stay in their lane.” This comes despite the fact that hundreds of victims from mass gun violence lie bleeding out on emergency room tables across the country at ever-increasing rates.

Political officials, however, look to put the blame on video games or on mental health; anything to avoid recognizing the larger systemic issues at hand.

While it is reported that only about one in five gun owners are members of the NRA, it is still one of the most politically influential and polarizing organizations in the country. Over the past three years, the NRA has upped their contributions to lawmakers, with the annual amount of money allocated for lobbying rising from $3 million per year to $5 million in 2017.

The NRA’s donations to election campaigns of candidates who oppose gun control laws allow it to continue to have a political chokehold on what can actually be accomplished in legislation, leaving too many Americans questioning the system and doubting the potency their vote has.

The group also creates narratives that pit gun control supporters against the Second Amendment in a desperate effort to drum up paranoia amongst gun owners. In actuality, these groups want to strengthen the rights owed by the amendment to law-abiding gun owners.

During the 1960s, federal and state gun laws restricted most shotguns to three rounds and semiautomatic rifles and handguns to 20 rounds. Gun companies were flourishing and gun owners and anti-gun individuals alike were satisfied with reasonable restrictions on firearms. And most importantly, they could limit body counts at mass shootings.

Though it seems that today the NRA’s money speaks more loudly than the blood being shed across this nation. If the NRA continues to spread its falsified narrative about the desecration of the Second Amendment, and if it continues to shovel money into politicians’ pockets, this nation can expect to see zero progress in sensible gun legislation.