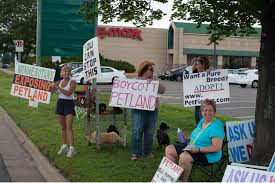 On Wednesday, April 3, Petland ended its franchise agreement in Fairfax due to an ongoing investigation by the City of Fairfax Police Department of alleged animal abuse. The store, which was frequented by many Mason students, has now shut its doors and removed the signs from the storefront.

The Fairfax County Animal Shelter confirmed that it took in 17 rabbits from Petland following its closure.

The shelter’s communications manager, Amanda Novotny, said in an interview with Local DVM, “We did get custody of the 17 rabbits from the Petland store closure, but they have all been sent to foster homes to get some tender love and care for the next two to three weeks.”

It’s unclear at this time whose care the puppies from Fairfax Petland are under.

According to NBC Washington, “Police seized documents and bodies of dead animals from the store Monday after an undercover investigation by the Humane Society of the United States [HSUS] revealed the bodies of 14 dead rabbits in the store’s freezer.”

The police search of the premises followed a tip from the HSUS alleging mistreatment of the rabbits at the store.

The HSUS had an undercover investigator working at the store for two months as part of a larger investigation into the handling of pets at Petland stores across the country. The investigation involved the use of a hidden camera, which revealed proof of the dead rabbits being left in plastic bags in the freezer.

The investigator, whose identity is unknown to the public, noted their findings in a blog post on the HSUS website titled “Dying Without a Sound.” It describes how “one rabbit who had been put aside in a basket under a shelf, [was left] to spend his last hours without veterinary care or relief from pain. If they were dogs, they might cry out.”

The investigator also found that, when rabbits got sick, they weren’t given veterinary care but were instead left to die. The post also contains interviews with employees who were aware of this practice.

One employee was quoted in the blog as saying, “There’s like, nothing we can do, because they don’t get treated by a vet. When they’re sick, they’re sick. We just let them die.”

Animals found at Petland largely come from puppy mills or, in the case of the rabbits, large-scale commercial breeding locations.

The undercover investigation by HSUS also allegedly tracked down the rabbit supplier for the Fairfax Petland to a farm in rural Maryland.

In regard to the conditions of the farm, the blog post noted after a trip in March, “Rabbits crowded into rows of outdoor hutches open to the elements or into filthy wire-floored cages in a barn. Some rabbits appeared to be sick or injured. The investigator found a dead rabbit placed on top of a hutch.”

The Fairfax Petland is still under investigation by the Fairfax police, though the store has been closed.