In the span of a week’s time, six student senators have resigned from their positions within Student Government.

“The President of the Student Body has had increasing relations in my department to the point that I am uncomfortable with working with her,” Hoffman wrote in the email, “Unlike any other department in Student Government, [President Bekah Pettine] is consistently involved in the planning and implementing of projects which are outside of her scope. This includes, but is not limited to, communicating with offices which fall under my department.”

Hoffman then went on to allege an incident that took place last fall between her and Pettine, which concerned the First of All We Vote event on Nov. 1. The event was hosted by Student Government, Alpha Phi Alpha Fraternity, Inc. and Mason Votes, and was comprised of a debate between College Republicans (CRs) and George Mason Democrats (GMU Dems) on a number of crucial issues ahead of the 2018 national midterm elections.

Hoffman, who is a member of CRs and represented them as a participant in the debate, claimed in the email that Pettine provided her with the debate questions prior to the event. 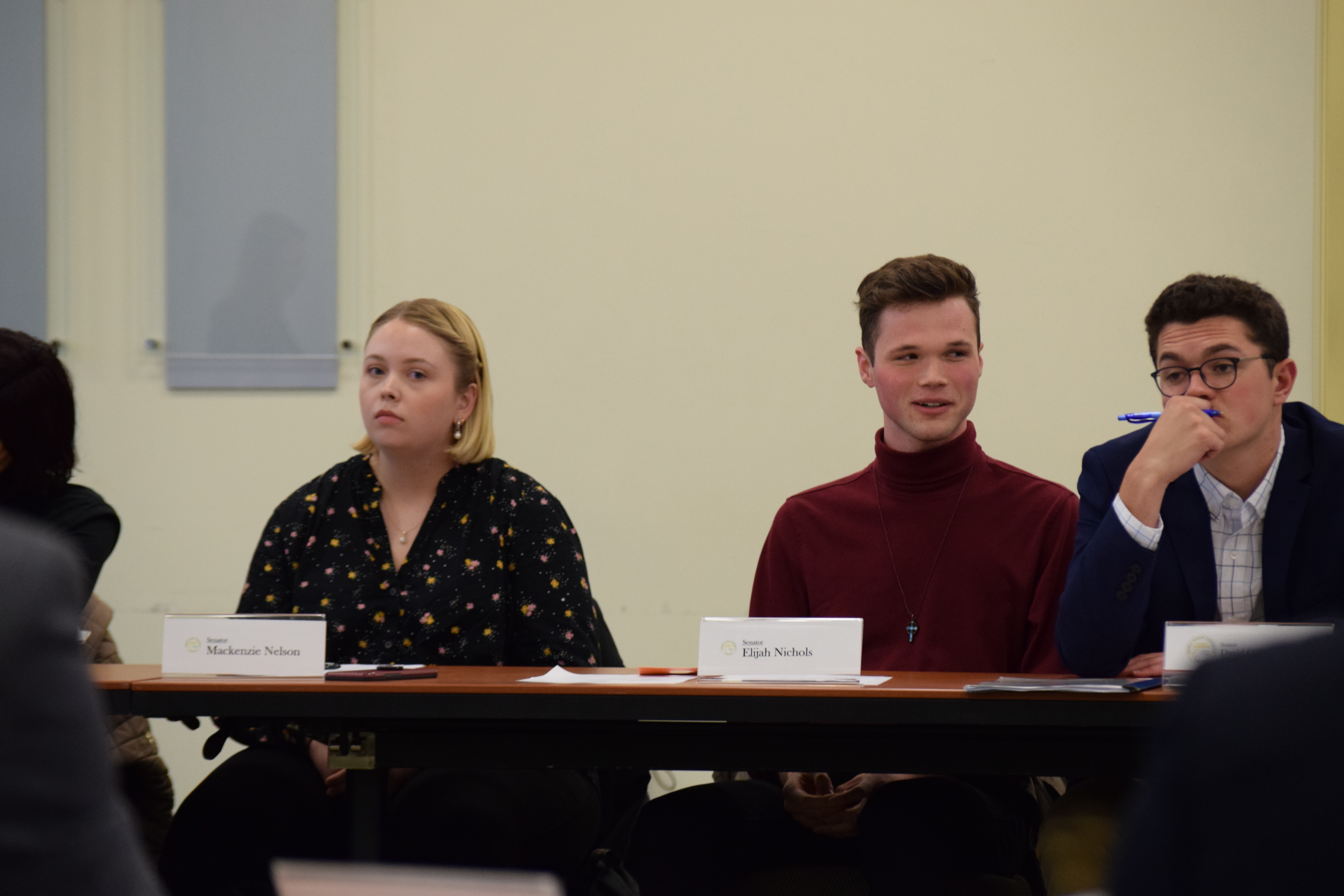 “Bekah sent me the questions for First of All We Vote in November,” Hoffman alleged. “After Bekah sent me these questions, I immediately sent them to [Senator Elijah Nichols], because I know the action of sending them to me was immoral as I was debating for the Republicans.” Nichols, who represented GMU Dems in the debate, confirmed with Fourth Estate that Hoffman had sent him the questions.

In response to the document allegedly sent by Pettine, Hoffman replied, “Did you read these questions??? Talk about bias!!!!!,” to which Pettine replied, “I know, that’s why I wanted to show them to ya’ll.”

Fourth Estate reached out to Pettine to verify the text message exchange, but Pettine declined to comment on the conversation. She is currently seeking legal representation to resolve these accusations. Pettine has stated that these accusations are uncorroborated and unwarranted.

In an earlier interview with Fourth Estate on Saturday, March 23, Pettine said, “I don’t know where that’s coming from;  “First of All We Vote happened six months ago, and frankly, it wasn’t something that I was involved with in planning. I don’t have a lot of information on it,” in response to a question about allegations of her leaking the document.

Pettine went on to say, “I did everything in my power to resolve the situation for all parties involved and to ensure that the questions were rewritten.”

“I believe it is time for me to go, because I do this in solidarity with Chairwoman Hoffman and Chairwoman Bates, because the next administration and the student body must know that bullying, harassment and misconduct have no place in Student Government,” Kelly said in her statement before the student senate. “I encourage all of you to take the action that you see fit to hold this administration and all others accountable in the future.”

Bates sent an email to students alleging that Senate Speaker Claire Olivier had attempted to “harm [Bates’] relationships with other senators through breaches of confidentiality [and] dissemination of false information.”

Kelly backed this allegation, stating that Olivier divulged this confidential information to multiple senators on the trip, including Kelly, on more than one occasion. Price did not respond for comment to verify the conversation between him and Olivier.

Former Senator Zachary Wolfson also resigned during the March 21 student senate meeting. In response to why he decided to resign, Wolfson said, “The main reason that I decided to resign actually ended up stemming from the resignation of former Admin and Finance Chairwoman McKenna Bates; the former chairwoman basically decided to resign for her own personal reasons.”

Wolfson continued, “It’s also important to note that the resignation that she offered did go and mention another senator, had dealt with similar problems to what she was mentioning, and I’m actually that other senator… This actually relates to the speaker of the current student senate, at least in the sense that she is not being supportive of other senators and supporting the student body.”

While Cone’s resignation was apparently not directly tied to those of Hoffman and Bates, he did express solidarity with them when interviewed by Fourth Estate. 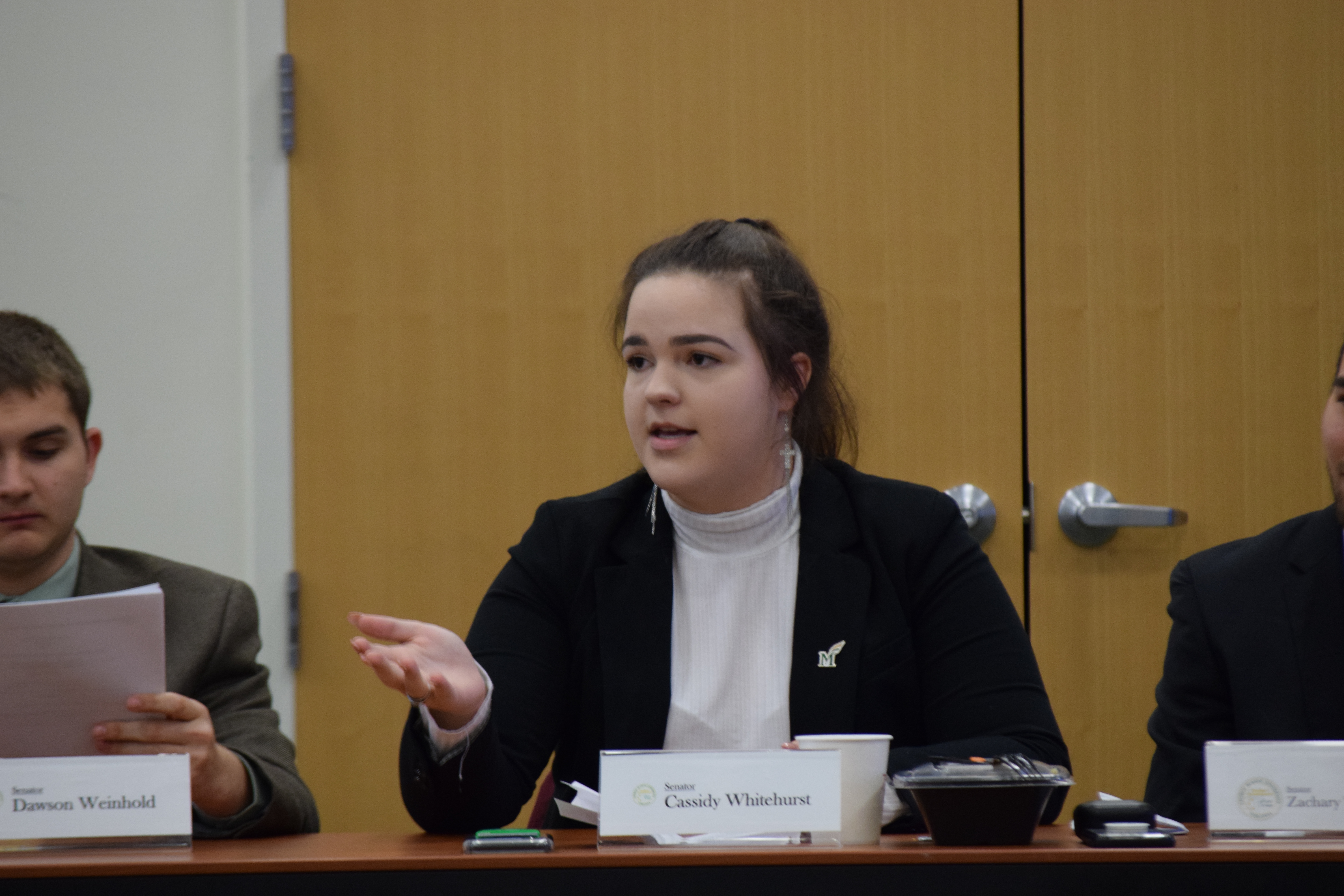 Joseph Fernando, former chair of the government and community relations committee, was also one of the five senators to resign during the student senate meeting March 21. Fernando attributed his resignation to that of Cone. “I could not, in good conscience … continue working in a very toxic environment,” he said.

Pettine spoke about how she plans to finish out the last few weeks of her term in the wake of the six resignations during Saturday’s interview.

“Something that I established as president this year is an anonymous complaint form as a way for members to bring forth their concerns, which goes straight to the advisor,” she said. “I really want to keep referring people to that and encouraging them to use it. In addition, I believe this year’s department meetings between executive secretaries, chairs and undersecretaries have been a great way to encourage further transparency and communication between branches.”

Pettine also said about her time within Student Government, “I really am proud of the work we’re doing. I’m just hoping that the culture and the way we speak to each other as an organization can be greatly improved.”

In wake of the resignations, in next week’s student senate meeting, only one of six chair positions will be occupied, which requires five elections to be held to fill the vacancies.

Correction (4.08): the reporters stated that details regarding a disciplinary action against McKenna Bates were confidential. To clarify, Senators Bates and Kelly only alleged that this information was confidential. However, it was only confidential via Student Government community norms, not official bylaws. Additionally, an attorney representing Senator Olivier has clarified that the disciplinary action against Senator Bates was appropriate due to a breach of Student Government rules, and the decision to enact the measure was allegedly solely Speaker Pro Tempore Price’s. The attorney also clarified that Senator Bates accepted the disciplinary action via email and stated that she would not appeal it.