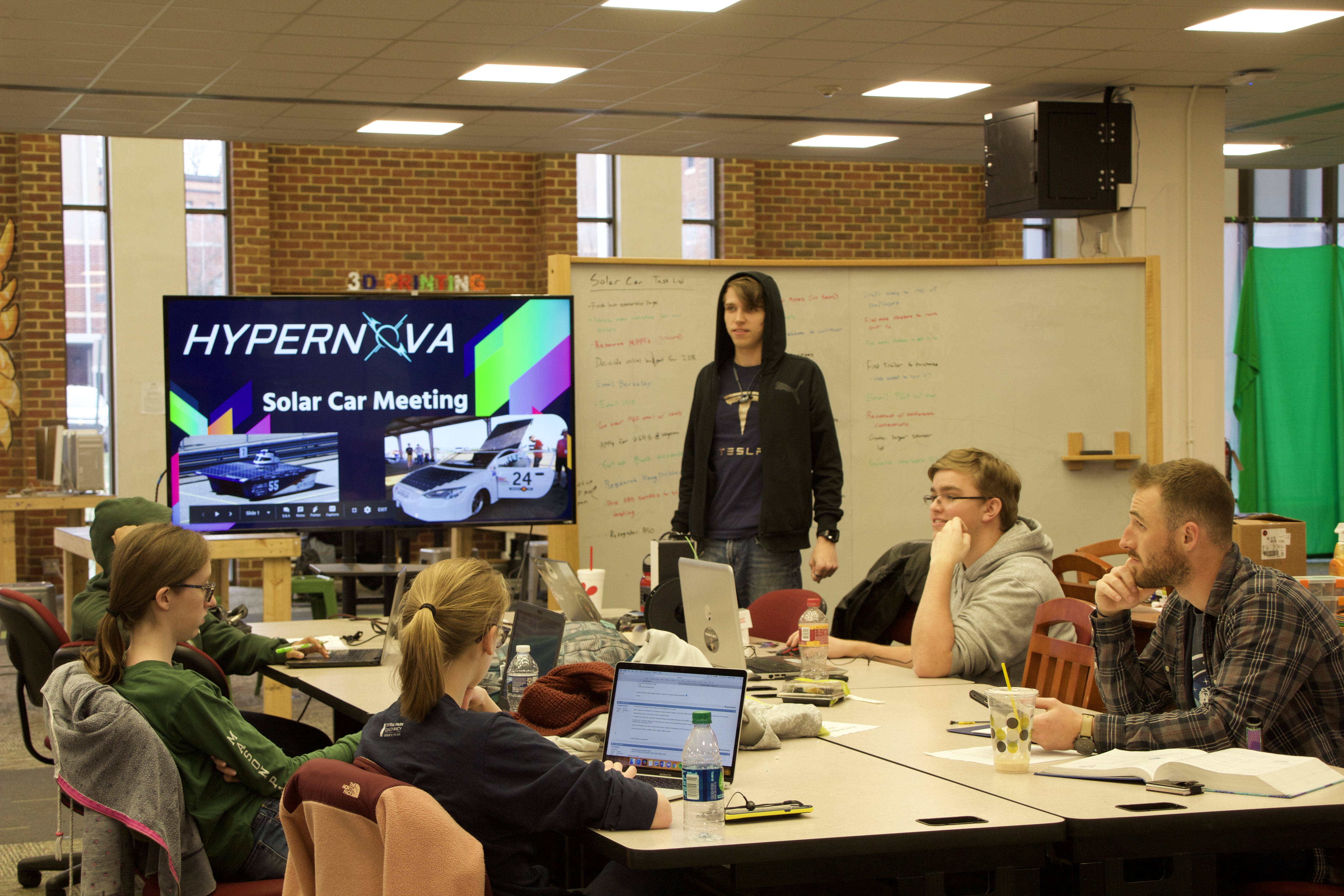 Being a student-run organization has never been an easy thing, especially when you start from the ground up like these students. “As a first-generation team, a rookie team, we are trying to do what some teams can’t do in years,” said freshman Garrett Newcomb.

Sophomore Alex Hughes, a bioengineering major and the founder and president of Hypernova Solar, explained why he founded the group. “All my friends went to UVA, Berkeley, you know a bunch of high-tier schools, and they joined their solar car teams,” he said. “And after I did robotics in high school, which was very intensive engineering projects, I thought we needed some sort of replacement.”

Being club president includes a lot of management. Hughes also covers recruitment, as well as what the overall path is for each team that the club has. He also has to look for external corporate sponsors, since they still need money to cover the trip to the WSC race in Australia and back.

Hypernova Solar is split into four separate teams—software, electrical, logistics and mechanical, which also split into their own sub-teams.

Newcomb, the lead of the mechanical team, explained that they all work as equals with no single person directing every move they make. Everyone works on what they do best, but they all rely on each other. One team cannot make the car alone.

Tristan Leresche, a freshman and the leader of the aero-body team, which is a subgroup of the mechanical team, was introduced to this club by another student.

“I design the aero-body shell, which is just like the outline of the car, and right now I’m 3D printing it,” Leresche said when talking about what his job was in helping assemble the solar car. Coming into the club at first, Leresche didn’t have too difficult of a time adjusting. “I pick up really easy on certain things … it took me like 15 minutes to get the first thing,” he said.

The lead of the electrical team, freshman Dominic Galarza, found the team through the Hypernova Solar club presentation.

“It was definitely not easy,” Galarza explained when speaking about his first times in the club. “There was a big learning curve, especially with communication on the teams and being overwhelmed with all the stuff you have to do, [and] all the aspects of the car.”

Newcomb explained that the team plans to make the car more practical than anything, since they cannot afford to focus entirely on effectiveness. The overall plan is to design something that someone would actually drive, instead of the awkwardly shaped cars other teams make in an effort to make the car more efficient.

They plan to have the designs done by May 15 with the chassis built. The car should be completed sometime in July, with the race in October. They will use their extra time to test out the car and make sure everything is working properly.

Parts of the car will be built using a hang printer, which is a 3D printer hanging from the ceiling mainly used to build taller items. The club will be making it so that it will be able to build parts of the car doors and possibly the hood as well.

Racing in Australia is enough of a feat with all the dirt and dust the students need to look out for, but the WSC has the car running from the top of Australia to the very bottom. With a distance of 3000 kms, or 1864 miles, it totals out to be around a five to seven-day race. The car stays at a consistent 30 to 35 mph for the whole trip to save energy and lessen the chance of any incidents.

The students participating need to account for every little thing when going a distance that far, which can take a chunk out of the already small $20,000 budget. $10,000 is going to the mechanics team and the other $10,000 is going to the electrical and software team. Every step counts, whether deciding what to make the undercarriage out of to protect the bottom of the car or what shape is the best for diverting wind.

Hypernova Solar hopes to get sponsors to help them afford better equipment. They are hoping to race the car for at least two or three races and gain enough publicity from unveiling it to gain sponsors and, hopefully, some more recruits, including non-Mason students.

Some members of the club are making efforts to recruit students from their high school robotics club. The club meets every Friday at The Mix from 3 to 5 p.m. As the building of the solar car will extend into the summer as well, the team plans to meet on Tuesdays and Saturdays during the break.

Keep an eye out for Hypernova Solar as they vroom their way across campus.

A Request for Empathy