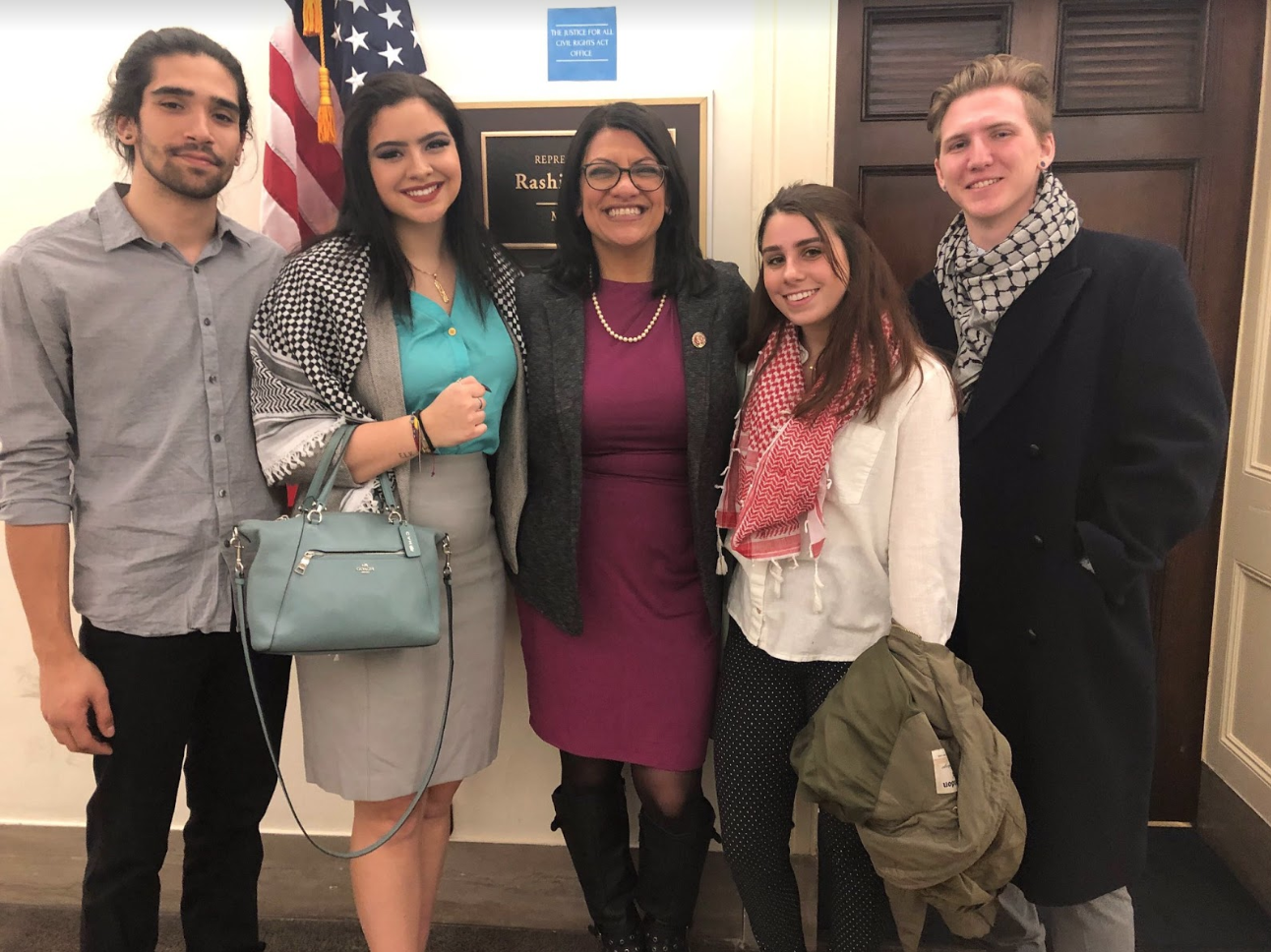 Members of Mason’s Students Against Israeli Apartheid (SAIA) headed over to Congress last week to lobby against a bill that would allow for state governments to refuse to do business with companies that boycott Israel.

The bill was passed by the Senate on Feb. 5 with a 77-23 vote, and is now in the House committee.

The implication if the bill is passed means that it would jeopardize the boycott, divest and sanction (BDS) movement Palestinian activists and organizations like SAIA follow.

Mason’s SAIA about section outlines that “BDS should be maintained until Israel meets its obligation to recognize the Palestinian people’s inalienable right to self-determination and fully complies with the precepts of international law.”

The BDS movement was created by Palestinians and modeled off the anti-apartheid movement in South Africa.

“The general idea [of BDS] is to form a nonviolent movement that will strategically target businesses and companies that actively support apartheid,” SAIA member Lucas Rodriguez said. “So contrarily to basically opponents of BDS, BDS does not just target Jewish businesses, it’s not targeting Jewish people—it’s targeting businesses that contribute to apartheid or military actions against Palestinians.”

One example of how the bill would impact SAIA is it would criminalize the organization’s efforts to get Mason to cut off ties to companies linked to illegal activity against Palestinians, such as Sabra hummus.

According to an article from The New York Times, “one of Sabra’s joint owners is the Strauss Group, an Israeli food company that according to its Web site provides financial support to the Golani brigade, part of Israel’s military force.”

Recently, SAIA started a campaign to pressure Mason to stop selling Sabra. Their petition has received 699 signatures so far.

“Firstly, the biggest problem [of the bill] is that it’ll end the divestment part of BDS,” Rodriguez said.

“We couldn’t go to the university and say ‘Hey, you need to divest from Sabra because Sabra has supported massacres in Palestine,’”he concluded. “Because if that [bill] is passed, it will be illegal for the university to divest because the university works with the government. They could divest, but then any government money would be immediately cut off.”

SAIA members went twice to Congress to speak with representatives and lobby for their concerns. SAIA member Amelia Fuller noted that it seems like the bill will not get passed through the House.

She continued, “With [Byers’s], he basically explained that the bill wasn’t going to go through and representative Byers doesn’t support the bill and that he had talked to multiple groups similar to us, or the opposite of us in the past who are talking about the same subject … but that [Byers] wouldn’t allow anything that infringes on free speech to pass through—and that was the same thing we experienced with representative Connolly.”

To SAIA members, it seemed that the reason the bill was not going to pass was because of issues with free-speech rather than also acknowledging the concerns of Palestinian activists and the BDS movement.

“It was clear that the representative felt like the U.S. has shared values and beliefs with Israel, in her words, and that because of that they’re obviously not going to take any action against the crimes that are being committed abroad, or even just make a statement against it because—while they try to make it seem like they care about both sides—it’s obvious one side was favored more,” Fuller said.

In the future, SAIA member Christa Hart believes their organization will work more on addressing larger concerns about Israel and Palestine to Congress.

“Our conversations will probably be more about the nature of the issue at a larger standpoint,” Hart said. “Because I feel like we were able to find a lot of common ground on the bill, and it was kind of an easy task, but I think we really need to actually have the conversations with members of Congress with why Israel is an occupational force and why we oppose that in the first place—and delve into the history and ideology behind Zionism.”

To SAIA members, at the very least, the Anti-BDS bill and surrounding conversation around Rep. Ilhan Omar’s comments over AIPAC demonstrate the traction the BDS movement has received and the growing need to address the U.S’s relationship with Israel.

“I think you see a very clear schism between the establishment and people like Ilhan because it’s becoming very apparent that you can’t hide it anymore, and they can’t hide the way that AIPAC is so effective at lobbying and so effective at public affairs,” Hart said. “I think people are realizing that there’s more than just Israel and Palestine. There’s a lot of other components going into it.”

While lobbying in Congress, SAIA members also had the opportunity to meet Rep. Rashida Tlaib (D-MI), the Palestinian-American congresswoman.

“We stopped by her office and we asked to take a picture,” Fuller said. “She seemed like she knew what group we were. She seemed interested. One of the aides that was there was nervous about letting us post on social media without going through the right people first, but then Rashida was like, ‘Yeah, you guys can post it. Do whatever you want.’ That felt important.”