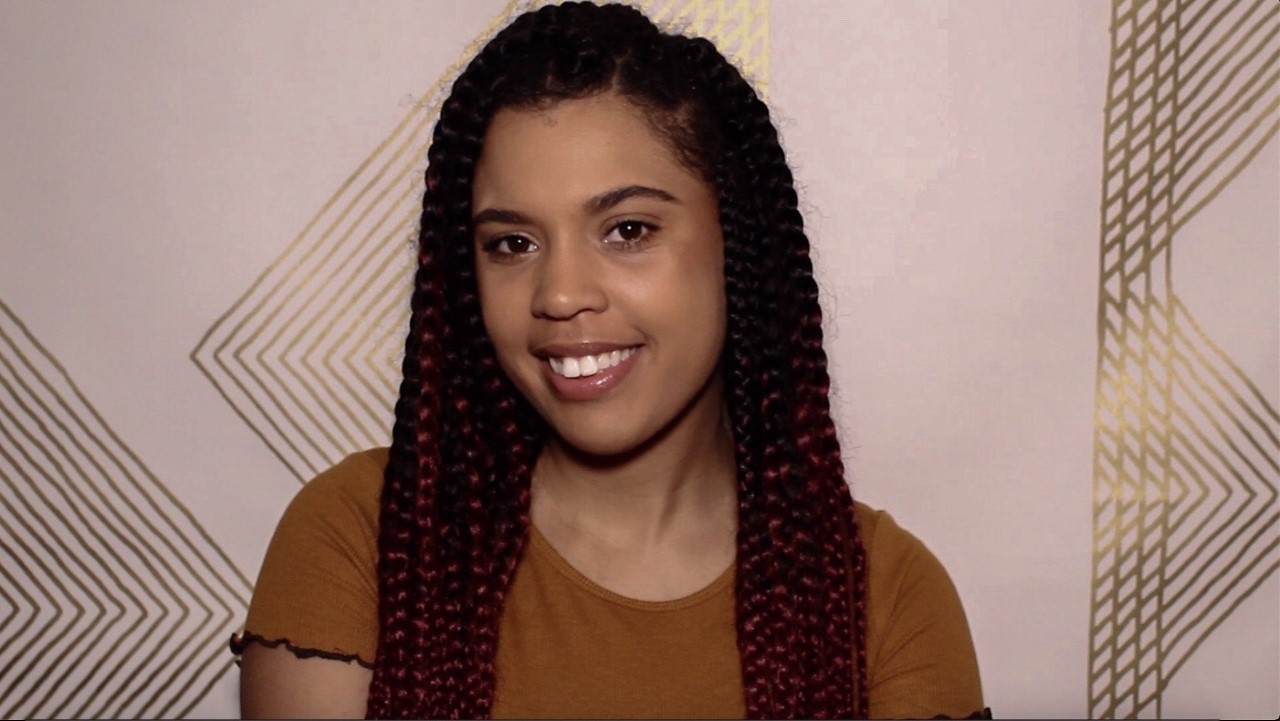 WHAT DO YOU DO IN MASON CABLE NETWORK(MCN)?

With Mason Cable Network as a whole, I am the executive producer and the host of “Mason Munchies,” which is a cooking show, and then I used to be a creative director for a show that is not currently on the air right now but I was supposed to be the host this season. [It] was “The Spill,” which is all things current events like fashion and things of that sort. When it comes to, like, the weekly news, I’m the assistant news director and I’m also one of the hosts for the news.

WHAT HAS BEEN YOUR MOST FULFILLING POSITION WITHIN MCN?

So the funny thing is, for “Mason Munchies,” it’s not my biggest passion. Like cooking wise it’s not my biggest passion, but I feel that’s offered me the most opportunities and it’s helped me grow, because I do have a lot of the directive, and plus it gives me a lot of opportunities to have my own creative thoughts in how I want things to be executed. And then I’m also hosting, so it gives me the opportunity to do what I eventually want to do when I get out of school, which is host a show of my own.

WHAT KIND OF SHOW DO YOU WANT TO HOST?

It varies. I’ve always said I wanted to be the next Oprah, so … the type of show I want to do is more like a daytime talk show. So I love Ellen and I loved Oprah growing up, so I just pull a lot from them, but also the daytime shows like “The View” or “The Real” where you’re just talking about current events that are happening and you just tell them whatever you’re feeling.

SO HOW DID YOU GET INTO MCN?

I’m a transfer student … so when I got interested in it, it was kind of towards the end of the semester. So I wasn’t able to get involved with it, but Ariel, who was the former news director, told me to come back the next year and learn more about it. So then I was just trying to get [involved] any way I can. I started out as a daily anchor, so I would do the daily report. And then from there I just worked my way through.

WHAT HAS BEEN YOUR MOST MEMORABLE SHOW FOR YOU?

When I was on The Spill … We would do a lot of funny games and stuff of that sort–I often was the one who pitched them. A lot of the memories I do have [are] either us doing the blind makeup challenge where we [had] one of the entrepreneurs on-campus, Morgan Fitzpatrick, [come] on the show and she was just showing us all her make-up lines and the hosts were putting on make-up … Things like that sort were memorable for me. 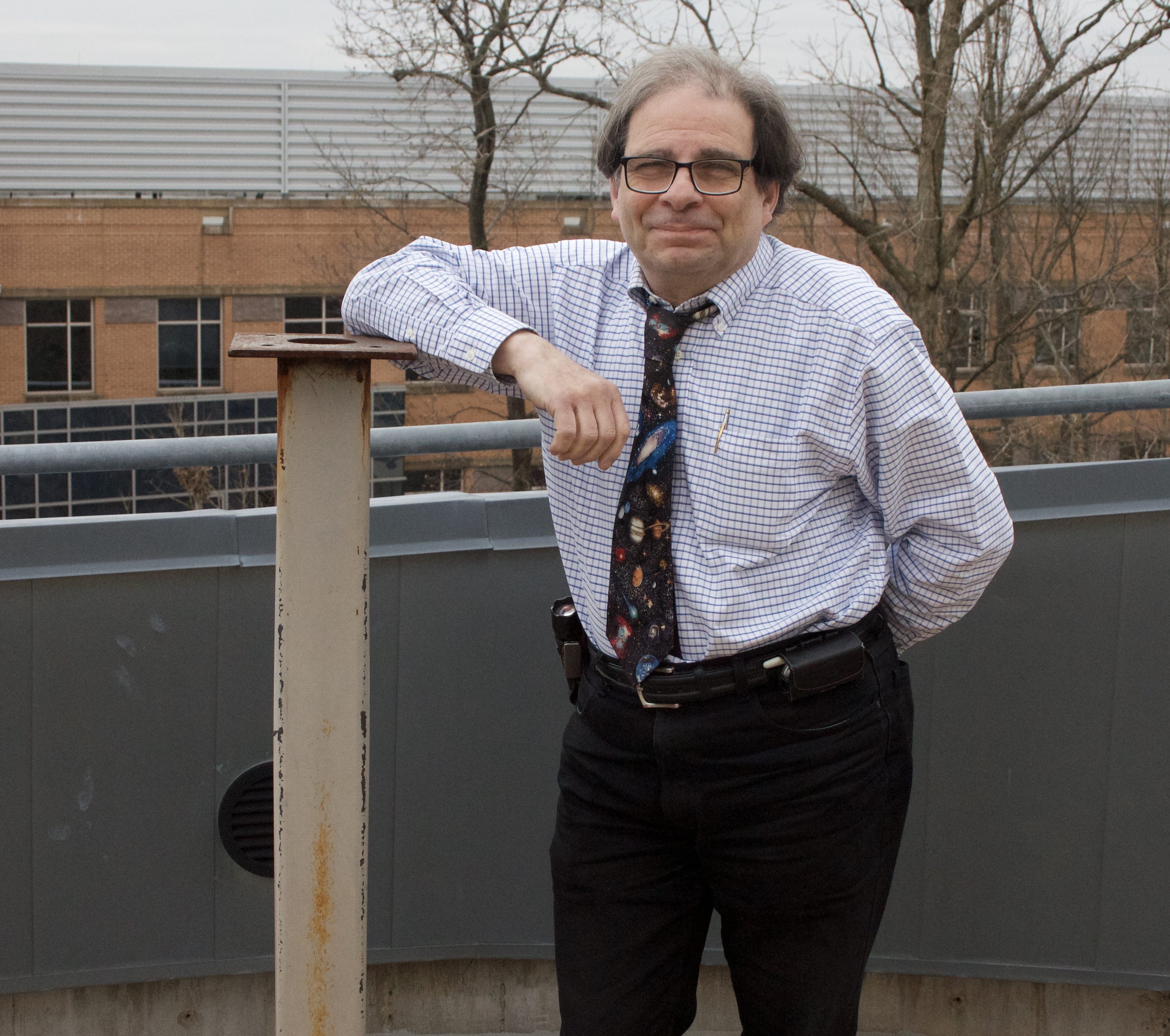 WHAT WAS YOUR FAVORITE THING TO RESEARCH, WHEN YOU WERE ACTIVE IN IT?

Well, I guess if anything I’d say—you’re going back to when I was working on my master’s thesis. I dealt with the Viking lander on Mars. And unfortunately these days, there’s a question or a debate about whether or not the mission found life on Mars. … I actually worked on the data analysis from the gas chromatograph–mass spectrometer from the Viking lander, and that was designed by MIT professor Klaus Biemann to search for organic molecules in the soil of Mars. Well, we didn’t find any, and believe me, I was one of those. I was obviously much younger in those days, 40 years ago, and I thought … maybe I could find evidence within the data of some organics, but no, I couldn’t.

WHAT’S YOUR FAVORITE PART OF YOUR JOB?

Well, I do enjoy teaching. It seems to be genetic in my family. My brother, who passed away several years ago now, was a math teacher and professor … [he] never left New York. He taught math at Marymount in Manhattan, but he spent most of his years as a high school math teacher, and I have—I still have cousins who were teachers, a lot of teachers in the family. I enjoy teaching. I also enjoy writing, and … I have a number of books that I’ve written and a couple more I have yet to get done before I pass. So it’s a combination. There’s not just one thing overwhelmingly. I enjoy teaching, I enjoy writing and I enjoy researching things from just a mental exercise, in a sense.

WHAT ARE YOU CURRENTLY WRITING?

Actually, I’ve come back to, if you want to call it, my roots. I’m working on a history of my own family in this country and the like, and I’m also working with another professor here on the history of her family story. She is a Holocaust survivor. She doesn’t like to write, but I think it’s important to get her story out there, and I’m trying to work with her as much as I can [to get] her story down. She’s older and also has breast cancer unfortunately, so I’m hoping to try and get her story written before she passes.

WHAT’S ONE THING YOU’D LIKE TO SAY TO THE STUDENTS AT MASON?

Don’t repeat the mistakes of the past. Learn from the past so you don’t make the same mistakes that we made when we were your age. And I’m afraid these days [that] there are way too many people who are repeating the exact same mistakes that we were making so many years ago. The other thing I guess kind of troubles me is that there’s more of an emphasis today in college education on preparing for a job instead of preparing an individual for being a citizen of this country. It’s not just to learn about computers, or to learn about physics or astronomy. 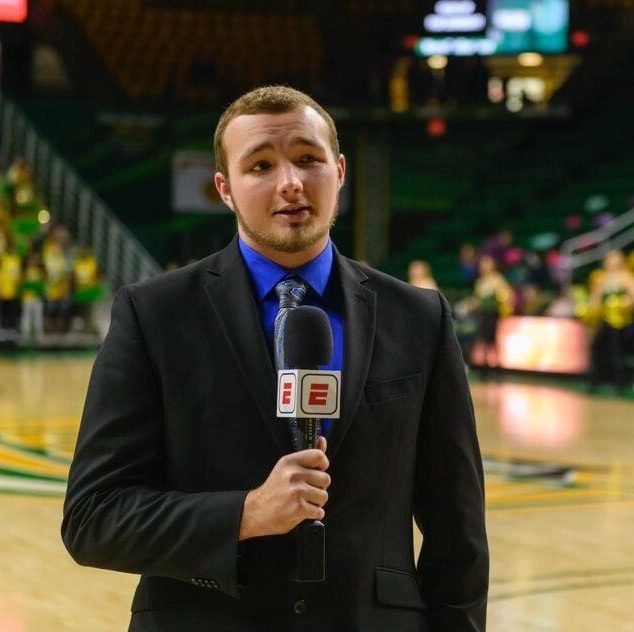 My major is communication with a concentration in media production and criticism and a minor in sport communication.

WHAT MADE YOU DECIDE TO COME TO MASON?

Unlike most students who would pick a college based off of their programs, I actually picked Mason based off of their broadcasting. And I came here and learned of them prior to coming to Mason and just loved what they did here and wanted to be a part of it.

WHAT ARE SOME CLUBS OR ACTIVITIES THAT YOU’RE INVOLVED IN?

I’ve been involved in my three years here at Mason over at WGMU, student media news. Also, obviously the sports broadcasting program is where I spend most of my time.

WHAT IS ONE OF YOUR BIGGEST GOALS?

To become a professional sports broadcaster on a major network.

DO YOU HAVE A FAVORITE SPORT, EITHER TO PLAY OR TO WATCH?

It probably would be baseball. Basketball is a close second, but probably baseball.

I just like the ability, especially when I’m calling baseball, to be able to add stories [and] give background to players, because people give flack for it having so much dead air and boring time in between pitches. But that’s the time I relish the most.

WHAT IS ONE PLACE THAT YOU WOULD LOVE TO VISIT?

I would probably just want to go back to Charlotte, North Carolina. I think it’s an awesome place to live, a place to eventually, hopefully, live myself.

WHO WOULD YOU SAY IS THE MOST IMPORTANT PERSON IN YOUR LIFE?

The most important person in my life is definitely my girlfriend. She keeps me straight and still going.

WHEN WILL YOU BE GRADUATING?

I’ll be graduating this May. I only [took] three years to graduate from college. It was stressful adding classes over the summer and stuff like that, but I felt like it would give me an advantage in the professional realm being able to be younger than everyone else but having the same education they have. I look at it as companies could have me under them for an extra year in longevity span. 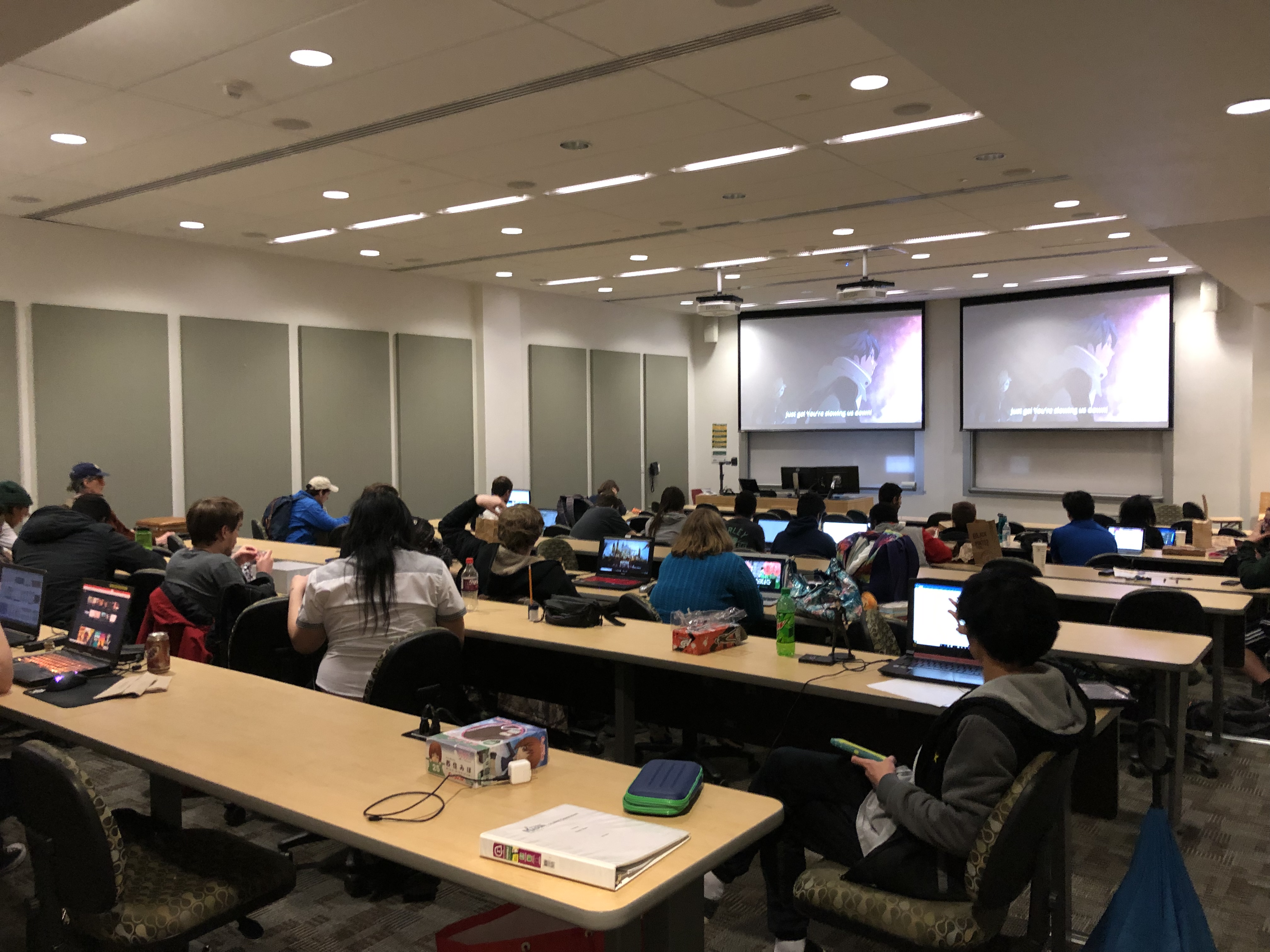 WHAT IS GMU ANIME AND GAMING SOCIETY

So we’re basically a casual hang-out place that meets every Friday, 6-10 p.m. We watch anime based kind of around a theme, and then we encourage people to bring games and otherwise just kind of socialize during clubs hours, so it’s really just kind of a place for people with common interest to come and hang out every Friday.

DO YOU HAVE A DIFFERENT ANIME THEME EVERY WEEK?

We do anime themes, and we’ll show usually 10 different shows that kind of fit themes, so we’ll do, like, racing night, where we’ll watch 10 different racing anime, or we’ll do comedy night and watch stuff like that. And the idea behind that is that … one, it helps people kind of decide whether or not they want to come to club because they’ll kind of know, ‘I’m not so much into giant robots anime, so I’ll skip this week,’ or ‘I’m not too much into romance so maybe I won’t come this time,’ but yeah, it also gives people a way to find new anime that’s in certain genres, because it’s been around since the ‘80s. A lot of people only have started watching from 2010 onwards, so there’s a lot of old stuff, a lot of obscure stuff, stuff that not everyone is aware of. The theme nights kind of give us a way to show people all kinds of perspectives on one genre.

WHAT DO YOU THINK MAKES THE CLUB UNIQUE?

I think it’s unique in that it really is a no-rules, kind of ‘do-whatever-you-want’ organization, so there’s no requirements. There’s a lot of respect for people’s time. If they need to leave early for something, it’s totally fine, all that kind of thing. It’s really different in a lot of ways in that it’s a community that you can feel like you can be a part of, but you don’t feel like you have to be committed to, because college students always change.

WHAT ARE SOME EVENTS THAT YOU ALL ARE PLANNING FOR THIS SEMESTER?

So this semester, we don’t actually have too much going on that’s really special … Our biggest event is one called Game Night … it’s the last Friday in March. We really emphasize the gaming side of things on that, so we really tell people to bring consoles, bring card games, bring board games and then we also try to get people … like the RPG club to come by and bring [Dungeons and Dragons] and all that stuff.

With gaming, do you think you emphasize it as much as anime?

No, we’re an anime-first organization. [With] gaming, there’s an E-sports Club on campus or Smash Club on campus, those guys are the ones who really do gaming properly. And it’s tough to really say, it’s tough to emphasize the gaming side of things because we are reliant on other people bringing stuff. We can’t buy games with money from Mason, and so it’d be up to officers to bring stuff each week, which is a huge pain. And then also there’s the liability of, ‘If we bring a TV and it’s broken, that’s my TV. I’m out the money.’ So there’s no real way for us to provide gaming in the same way that we do the anime, so it’s always been the weaker.