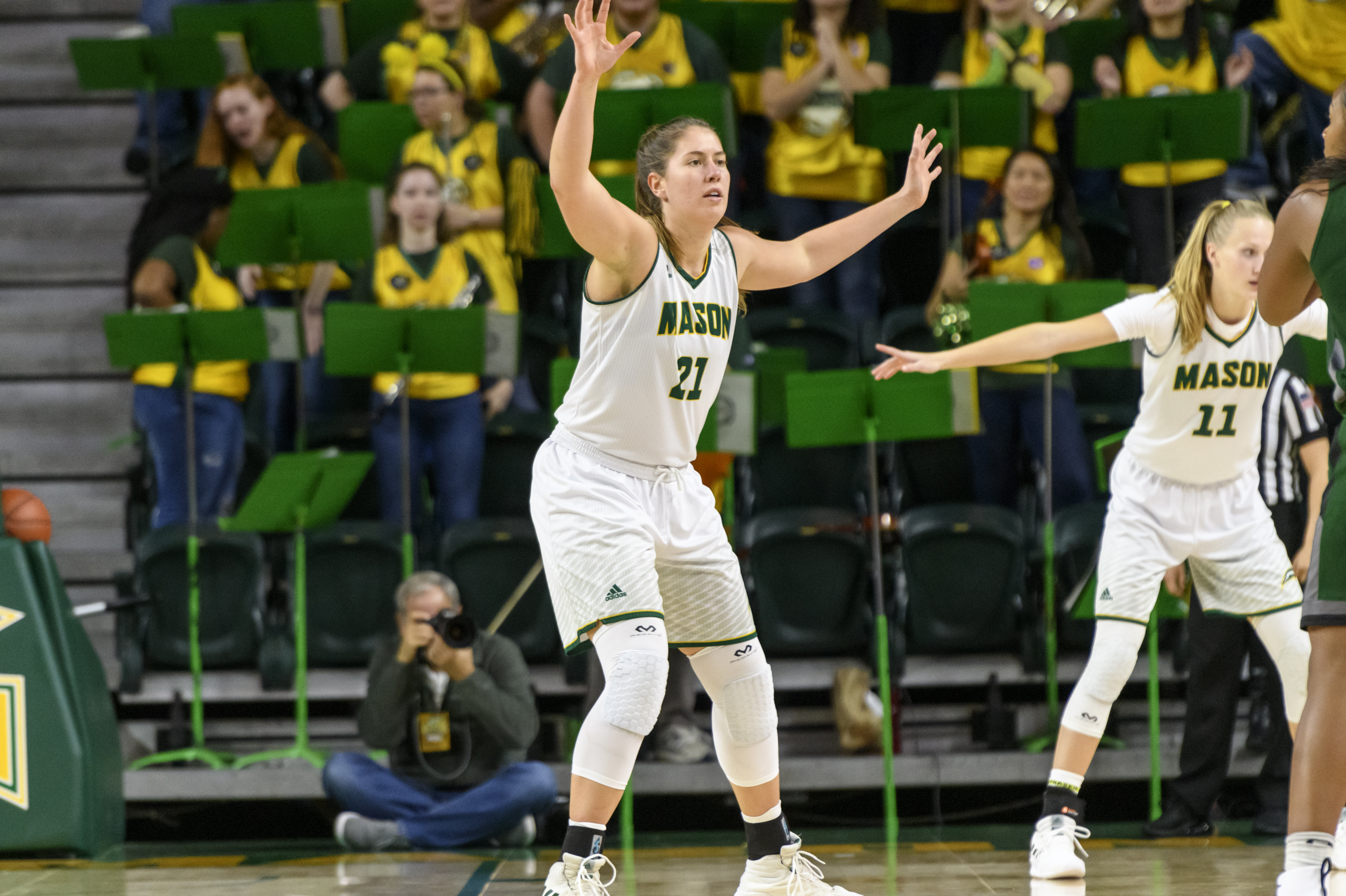 When she first came to Mason, Casey Davis would have never imagined that she would one day be the star in a public dance battle.

After winning Simon Says at Mason Madness years back, that’s exactly what happened—and reflecting back now, it’s a moment that shows how basketball helped her come such a far way.

“My freshman year I didn’t really talk much at all,” she said. “I kind of sat in the background and only spoke when I was spoken to, and now I would say that I blossomed and communicate well with people and feel confident in who I’m becoming.”

Davis credits basketball for helping her grow on and off the court. Now, she’s a fifth year player as well as a senior leader and senior captain.

It’s a long way coming since she started playing basketball in her hometown, Gambrills, Md., at the age of five, along with a number of other sports like softball and soccer.

As she got older and taller, basketball was the sport that stuck with her most. She says her parents are the people she looks up to and have supported Davis through the endless basketball practices and games.

“They’ve helped me throughout my whole journey in basketball,” Davis said. “When I was younger, it was mainly ‘Casey has basketball, Casey has this, lets help and support her,’ and I’m really grateful for that. Even now to this day they still support me. I’d still say they’re the number one people who helped me reach my goal, so I really want to do this for them.”

Davis has persevered through it all, even when she endured a stress fracture injury in her sophomore year at Mason. Just as she was coming off of her freshman season and began to get more playing time, Davis had to sit out some games. 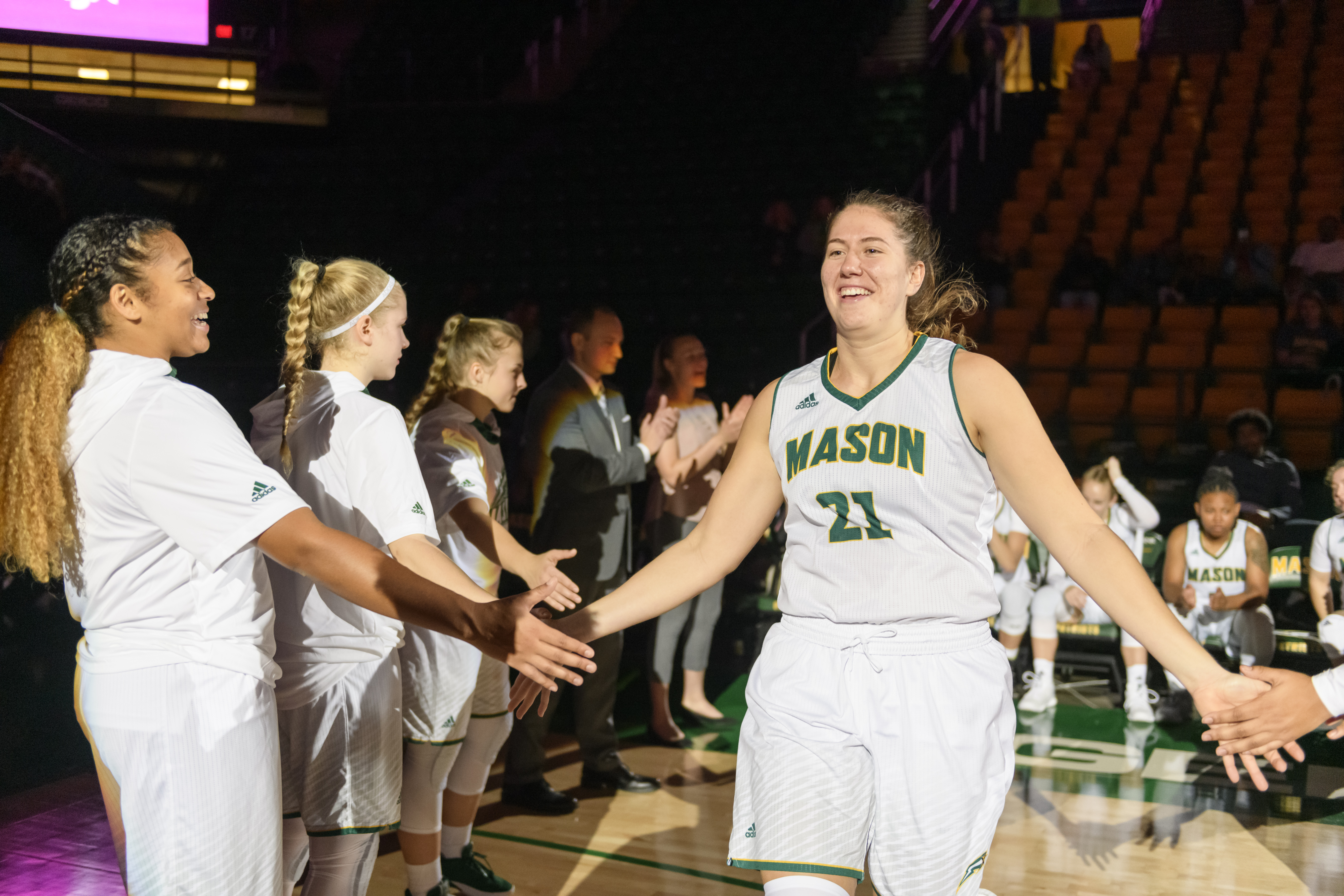 “I accepted it,” she said. “I learned a lot, actually, because I was able for the first time [to] just sit on the sideline and watch the development of the team and [see] things you would never notice as a player on the court. So then after that I just had to work back to get back into playing shape so that was hard.”

She sees the silver lining and understands how that chapter helped her grow to be a better player.

She added, “But I also got the opportunity to get a fifth year so that was also great, because that allowed me more time to grow as a person and build more relationships with people, because if it wasn’t for my injury I wouldn’t be here now. I think everything happens for a reason and it worked out fine.”

Even this past semester Davis fought another injury in her final year but was able to get through it again, head coach Nyla Milleson mentioned.

“Casey’s just so steady everyday,” she said. “Through her career, there’s been a lot of adversity, she’s fought injuries. Last year with the appearance of Natalie Butler, she had to kind of switch roles and then she had an injury again this year. Through it all, she’s just been really steady. She’s been a great teammate, she’s supported her teammates. She’s done what she needed to do everyday in practice.”

Davis received the Patriot Pride award last year for being an exemplary model for what it means to be a Mason Patriot. This year, she is also standing out as a senior leader.

“It’s still pretty relatively new to me this year, ‘cause this is the only year I’ve been captain so I’m still working and growing towards becoming a better leader,” Davis said. “But I would say the girls respond to me well because I try to lead by example.”

She hopes her teammates learn to always come in with a good attitude, be happy with the opportunity they are getting and be grateful to represent and play at Mason.

One standout moment for Davis that highlighted her experience playing basketball at Mason was back in her freshman year, when the Women’s Basketball team beat Virginia Tech in non-conference play.

“It was really exciting because Virginia Tech is … a bigtime program and we ended up beating them, and it kind of set the tone for the rest of the season,” she said. “I remember after the game in the locker room we all got excited and hype and were like dancing with the coaches and stuff, and it was just a really great way to start off my freshman year.”

Looking toward the future, Davis hopes to still stay in the basketball realm and look into coaching. She wants to become a graduate assistant in the next two years and get more experience in coaching.

“I’ve been around basketball so long that I don’t really want to leave it,” she said. “I want to make it part of my job when I’m done.”

Ideally, Davis sees herself being a coach for young girls. “I just like how coaches can really impact young people’s lives and I feel like college is a really important time in anyone’s life, but most of the girls come in around 18 and then you leave around 22, 23,” she said. “So, I think it’s really cool to be a part of that experience with them and help them learn as much as they can on the basketball court and off the basketball court. I really like that aspect of coaching.”

During her time playing for the Women’s Basketball team, Davis is most proud of the relationships she’s built with her teammates.

“I can say when I leave here I have lifelong friends, which is awesome, and I’m very fortunate for leaving without any student debt,” she said. “I was given the opportunity, all of it is paid for. Just, being a part of Mason Nation was great. I was here for five years so I guess I got the full experience.”

In the future, Davis can be spotted with the Women’s Basketball team at 4 p.m. on Feb. 27 where they will compete against Saint Joseph’s University.