“What a game,” head coach Nyla Milleson said after the game. “What an atmosphere … Huge win for our team tonight.”

The 61-46 win over George Washington University was one for the history books. In front of a season high 1,468 fans and a record number of students, Mason completed a sweep of GW for the first time since joining the Atlantic 10. The last time the Patriots won consecutive games in the series, there were seven years between the games, from December 2002 to December 2009.

Prior to the start of the game, sophomore Nicole Cardaño-Hillary was honored for scoring her thousandth point against Saint Louis University on Jan. 31.

Here are three takeaways from the victory.

Though she cooled off in the third quarter, she turned four steals (two from her, one from Jacy Bolton and one from Marika Korpinen) into four layups in less than three and a half minutes to help secure the win. 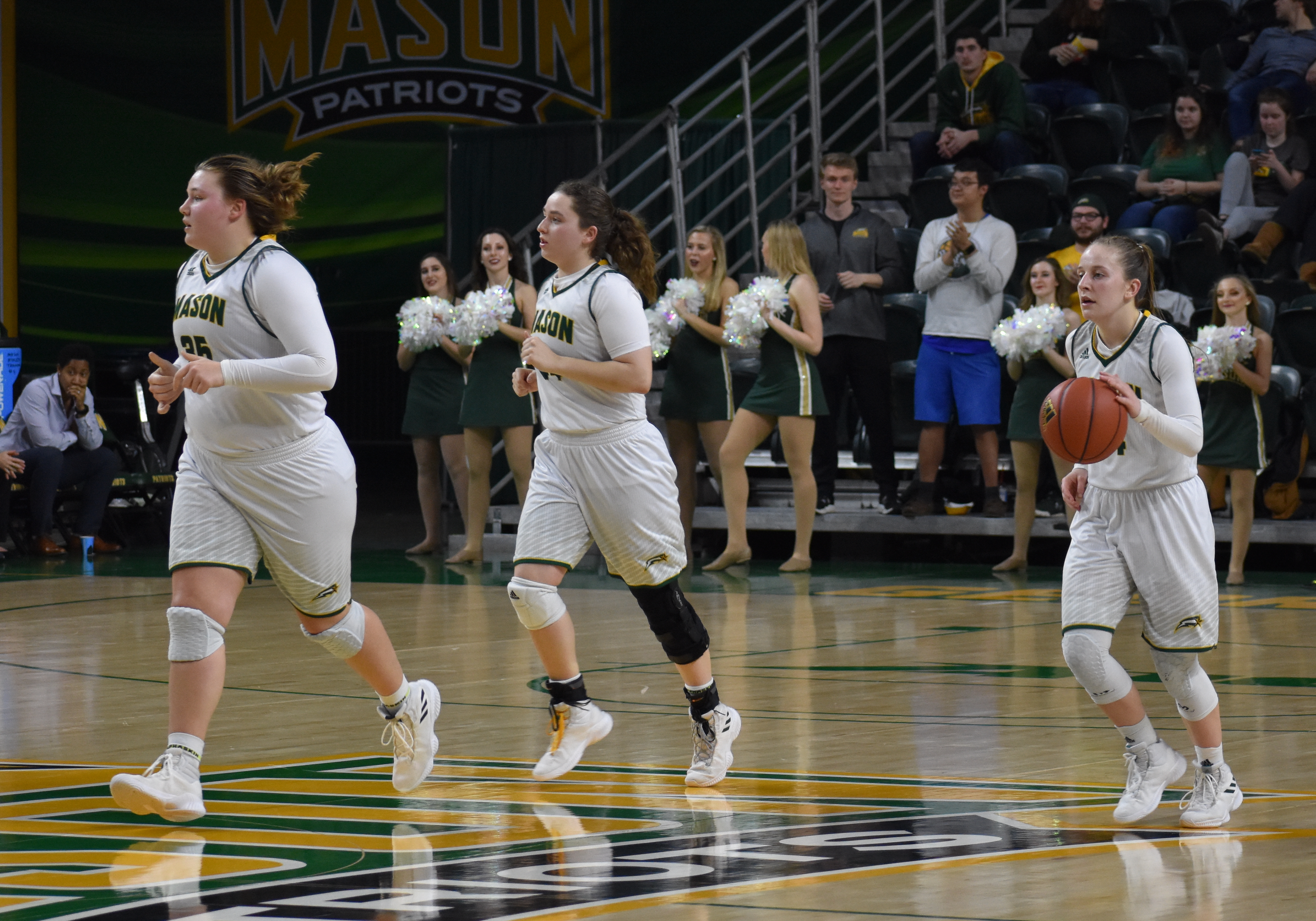 2. Everyone needs to contribute to win, and they did

Though it may not be obvious in the points column, on the box score every Mason player was able to contribute.

After GW cut the lead to seven early in the fourth quarter—the closest the game had been since the second quarter—junior Alexsis Grate hit a corner three at the end of the shot clock to put Mason up 10 and help secure the momentum for the rest of the game. Grate finished the game with seven points, two rebounds, two assists and a steal.

After the game Grate said, “I just kind of stayed in the flow, didn’t (sic) be selfish just whatever I can do within the offense. It just happened today.”

Milleson said, “The three that Lex hit out of the corner at the shot clock was huge and again, that’s just willing to make that next extra pass that we were able to do tonight. So it’s nice to have two point guards on the floor too.”

Jacy Bolton, who is tied for first in the conference in rebounding, grabbed eight rebounds, including three of the team’s six offensive rebounds. She also added six points, three assists and a block.

At the press conference, Milleson said, “I thought we did a great job sharing the ball, really trying to find the open people and we went a little stagnant, maybe trying to force the action a little bit but we shared.”

3. Capitalizing on turnovers while making sure your opponent does not helps

Mason averages 16.6 turnovers per game, fourth worst in the conference. However, GW scored just seven points off of Mason’s 16 turnovers. Mason was much more effective at capitalizing on GW’s turnovers, scoring 18 points on 14 GW turnovers.

Nine of the Patriots’ turnovers came in the second half. Had the Colonials been able to capitalize, the game could have ended differently.