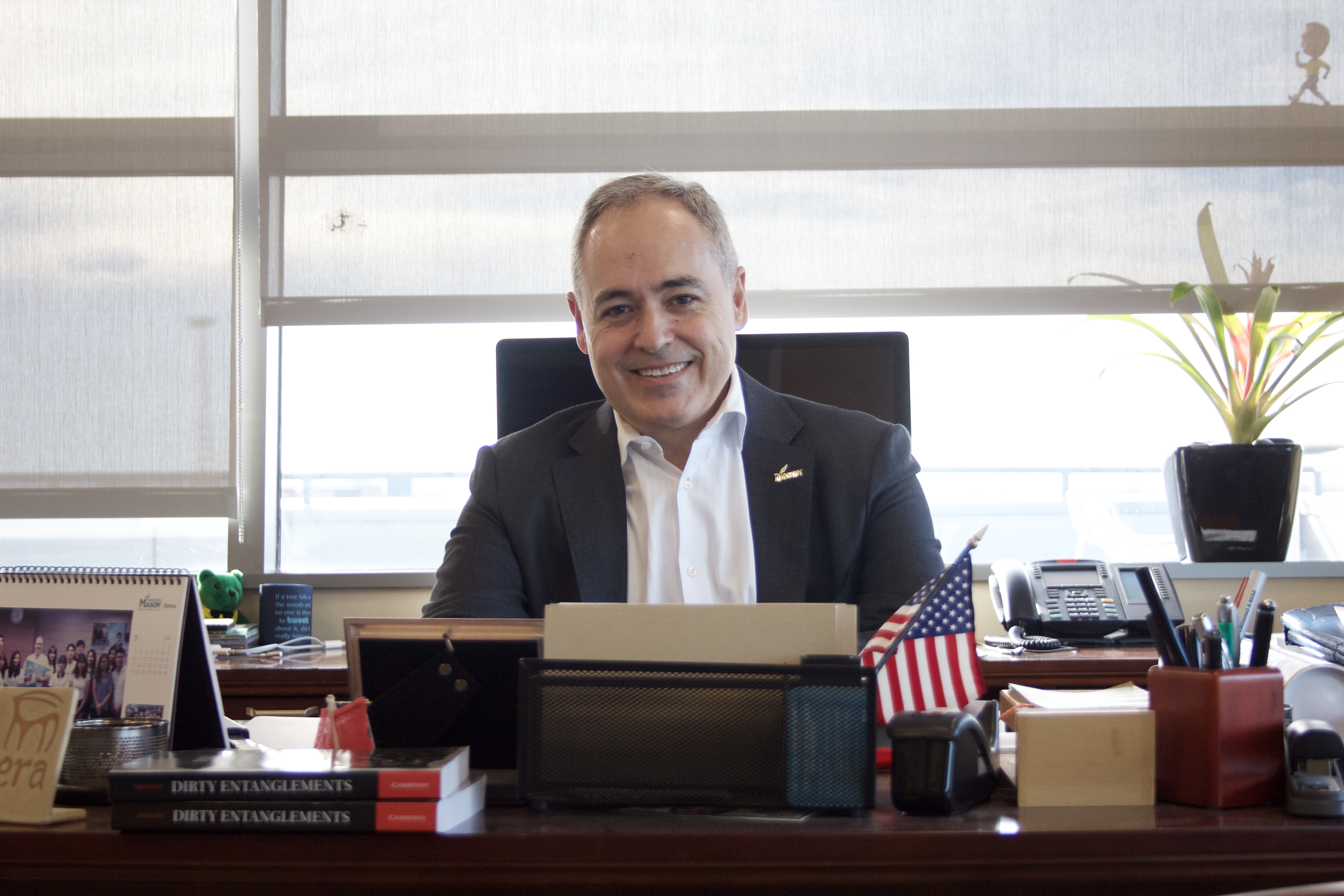 The first thing you notice walking into the president’s corner office on the top floor of Merten Hall is the glass double doors. Looking through, one sees a modest, neat office like any other at Mason.

Desks at the entrance seat friendly secretaries leading to cubicles along the hallway for the various members of the president’s office. As I walk through, President Cabrera appears at the other end of the hallway, coat in hand and a backpack like any other student on campus, and invites me to the back for our interview.

His personal office is sizable but modest, save for the lunch patio connected to it that sits on top of the building. Slightly taller than the rest of the floor, his windows wrap around two sides of the room, overlooking most of campus to the south and west. Photos of him posing with various Mason athletic teams and class commencements sit around the room, along with the much beloved Doc Nix bobblehead.

Under a standing desk lies an unhung artwork frame across from the cluttered main desk and a photo of his wife. There is a closet on one side of the office into which he briefly disappears, before asking if I want coffee. We get to talking about the new Starship robots as the Keurig hums behind the doorway.

“Aren’t they fun?” he says. “What’s fascinating is how people react to robots. I have no doubt that ten years from now we’re gonna live with robots, and we’ll all remember this moment as our first daily encounter… It’s interesting, psychologically, seeing how people interact with them. It’s fun to watch. It’s a great experiment.”

We sit down for the interview at a coffee table on the other side of the room. Ángel Cabrera has been in the business world for years—his resume includes board memberships in PetSmart, National Geographic and Inovio, not to mention the Richmond Federal Reserve, the Northern Virginia Technology Council and many others. Naturally, my first question is how he has time for all these responsibilities.

“In the kind of job I have, it’s really important to have an eye on what happens outside of the organization,” he says. “A big part of my job is to prepare the university for what’s coming … I think my board memberships give me that.

He continued, “Each of them gives me a little bit that’s important to my job. I sit on the Federal Reserve Bank of Richmond board … that’s a board where we’re constantly discussing economic trends in the country and in Richmond, so in terms of knowing what’s coming ahead of us, it’s a great place to be.”

He adds, “I’m [also] on the board of the Northern Virginia Technology Council, and that board has the CEOs of all the leading companies in the region, so that’s the way to not only know what’s going on among the employers, the folks who are gonna hire you and what their needs are, but it allows me to get to know them personally. So when I need their help, I can pick up the phone and say, ‘Hey, would you do this for us?’”

In addition to his business responsibilities, Cabrera has been in academia for most of his career. Prior to his current position, he served as dean of the IE Business School of Madrid and president of the Thunderbird School of Global Management in Arizona.

He is the first native of Spain to serve as the president of an American university, an accomplishment he holds very dear. ‘I’m an educator at heart,’ he tells me.

“My mission in life is one of education,” he says of how his life led him to Mason. “One of my granddads was a teacher in a small town in Spain. I saw the impact that just one teacher can have in a small town.”

“My other granddad was a business guy, a small business owner, and I also admired how he managed to create jobs for other people, and the complexity and creativity of creating a business,” he continued. “Neither of my parents went to college. I had the opportunity to go to college, and because of the professors that mentored me and opened doors for me, I ended up coming to the U.S. for grad school. I’ve seen the transformative power of higher education on an individual.”

Cabrera’s degrees confirm a deep and varied interest in education—he earned his bachelor’s in telecom engineering, his master’s in electrical engineering and finally his Ph.D. in cognitive psychology.

“When I was a senior in college saying, ‘What do you think you’ll be doing in 20 years?’ I could have listed 10 possibilities. I assure you, being a college president, let alone a college president in a different country, would not have been one of the things I listed,” he laughs.

“I normally ask two things when I make a decision in my career,” he said. “One is, ‘Am I going to learn and grow?’ so I’ve always looked for stretch assignments. The second thing is, ‘Can I have an impact? Is this something cool and impactful and meaningful that is going to have an impact on someone else’s life?’ Those two questions helped me well, and ended up opening doors that I never could have imagined.”

However, Cabrera’s career is not his top priority. He has a wife, and two children at Harvard and Georgia Tech. “That’s really, at the end of the day, the most important part of your life,” he says of them. “At the end of the day, what I’m most proud of is my family… I’ve seen my kids grow and become adults, and it’s just a great sense of satisfaction. Without a doubt, that’s the most important thing.”

Cabrera has been president of Mason since he succeeded President Merten in 2012. In that time, he’s overseen numerous expansion projects and watched thousands of students come and go.

However, he has also seen some controversy within that time. For the last several years, Cabrera and his administration have faced criticism and scrutiny for their handling of gift agreements from major donors, including Charles Koch and the Federalist Society.

Although most of the agreements, which led to questions of transparency and donor control, happened under the previous Mason administration, others that occurred under Cabrera included the agreement which renamed the George Mason University School of Law Antonin Scalia Law School, as well as another $5 million from the Charles Koch Foundation last spring to further expand the economics department.

“My concern isn’t ‘Are we getting too much money from the private sector?,’” he says of his philosophy with donors. “My concern is ‘How do we get more of it?’ We’re a young university… in a sense, we still have not claimed our fair share of philanthropy dollars.

He continued, “In doing that, we have to be very careful to make sure that no dollar[s given] has any undue influence. What you cannot say is ‘We’re going to accept gifts from this donor, but we’re not going to accept from that donor because I don’t like this donor’s political ideas.’ And by the way, who would make that decision?”

“The controversy last spring was because we had found some old gift agreements that questioned that a little bit,” he added. “They were not fatally flawed, if you will, but they did raise fair concerns [about] some of those old gift agreements. They predate me and my team, but still.

And they were mostly expired except for one that had some money, but they did raise questions … and what we realized is that our existing policies were not very clear.”

He also notes that “we’ve now more than doubled our endowment, and potentially with a new gift that we haven’t announced yet, we’re probably going to triple that endowment from before I was here.”

He also wanted students to note that he spends a great deal of time discussing how to expand Mason’s day-to-day infrastructure to ensure students are getting the best experience. “We’re building new facilities … we’re planning expansions [at SciTech and Arlington] … we’re also relying on partners like, in this last month, the City of Fairfax, [which] voted to authorize the construction of new student apartments in the city,” he said. “So we’re working on all those fronts.”

Cabrera’s philosophy can be summed up as a fusion of entrepreneurship and education. He talks about his pride in Mason as being a hub for innovation, as well as allowing access to students who otherwise may not be able to get an education.

“Our students should be very proud to be a part of this university,” he tells me as we wrap up. “Make sure that, whether you’re out there as a student or an alum, you tell everybody where you went to school … whatever we do happens because of everybody.”

Before I leave, I ask about the decorative wooden plaque sitting on his coffee table. He laughs and tells me it’s a gift from his children. It reads Illegitimi non carborundum: “Don’t let the bastards grind you down.”