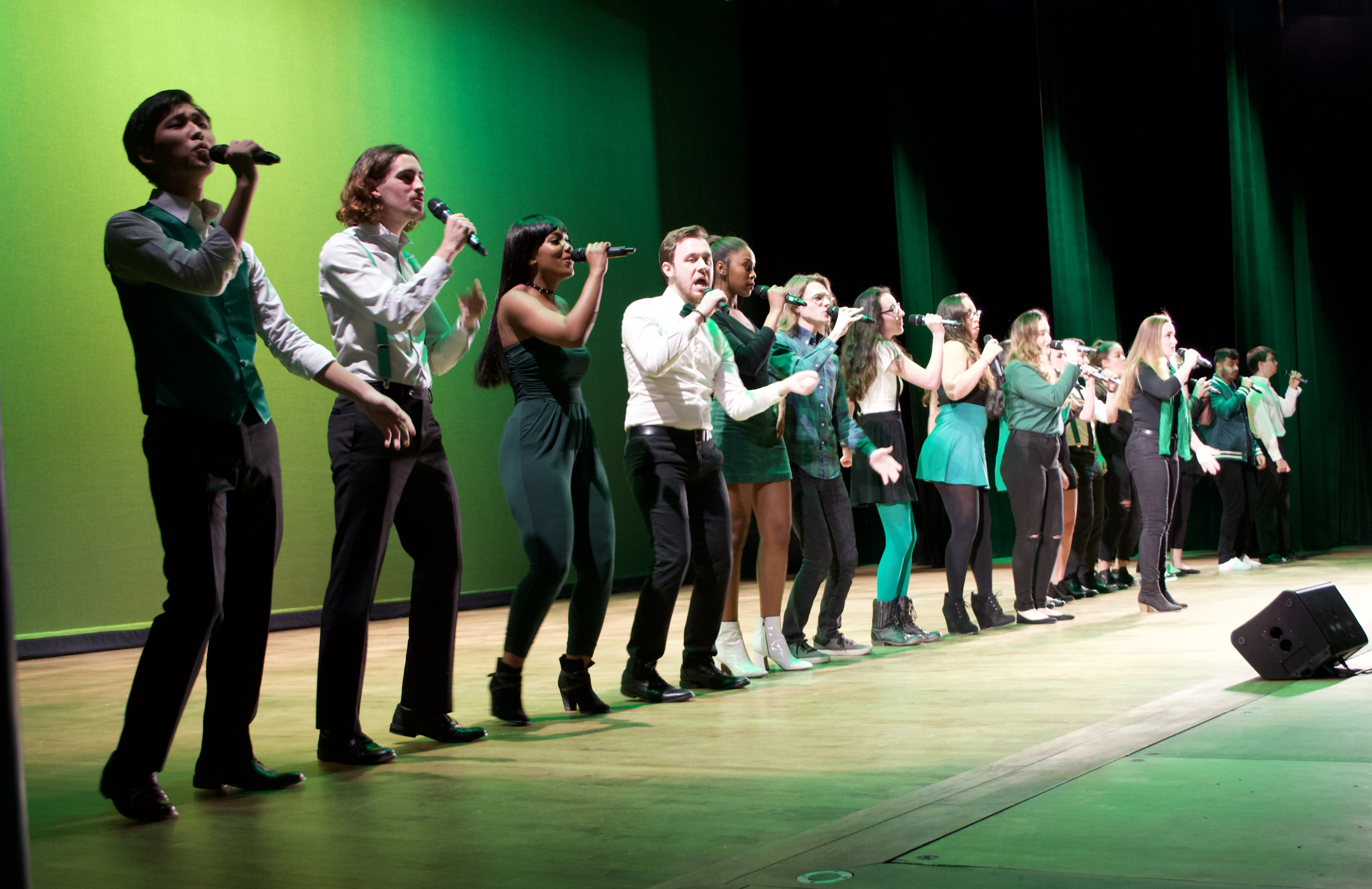 When Austin Lazo, senior mechanical engineering major, was a freshman, he was interested in joining a vocal performance group, like choir or a music class. However, when members of his floor mentioned upcoming auditions for a co-ed a capella group called Patriots Pitches, he went—and made it.

With Lazo now serving as president, Patriot Pitches has competed in the International Championship of Collegiate A Cappella (ICCA) Quarterfinals for the first time in their history, performing songs such as “Payphone” by Maroon 5 and “Demons” by Imagine Dragons on Jan. 26 at George Washington University’s Lisner Auditorium.

Mason Some Noise, another Mason co-ed a capella organization, has continued on to the ICCA Mid-Atlantic Semifinals after placing second in the quarterfinals competition in a set that contained tracks such as “I Have Questions” by Camila Cabello, “Thief” by Ansel Elgort and “Hurts” by Emili Sandé.

Both groups prepared extensively for the competition, though in different ways.

Mason Some Noise’s rehearsals consisted of vocal warmups, cleaning choreography and sectionals—and lots of goofing off.

“One thing we have to reiterate a lot on ICCA day is because it’s such a big venue that we’re not necessarily used to performing on, we’re on mics that we’re not used to performing with and we have the monitors on stage sending our sound back at us, it’s very much about trusting each other,” Evan Belcher, junior computer science major, said. He serves as president and music director in the group. 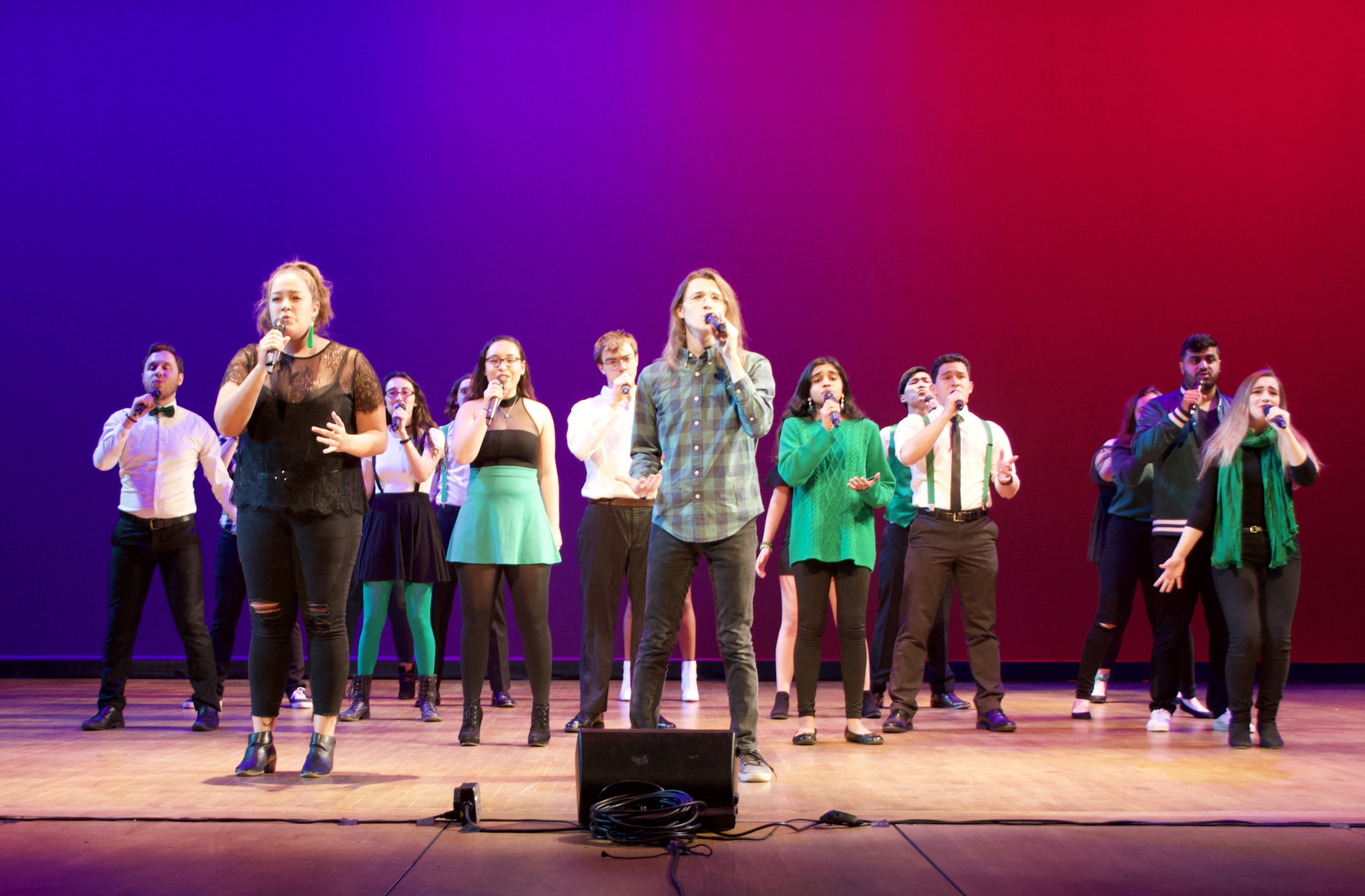 For the Pitches, at the beginning of preparation the group focused more on recording and other performances instead of on the competition, with the result being time lost that could have been spent on their ICCA set.

“We found out … in the middle of November, and then we were like, ‘Okay, we’re way behind.’ because we—earlier on in that semester we sort of lost a focus per say,” Lazo said.

As the competition came closer and closer, rehearsals became more intense to make up for this lost time, including practices increasing from four to six hours a week and an eight-hour ICCA preparatory rehearsal on Martin Luther King, Jr. Day that allowed them to become mentally prepared and focused on the competition.

“I was excited for it and then I was also kinda worried about it because we hadn’t necessarily prepared all that well, but at the same time once we heard we kicked it into overdrive and were like, ‘We got this, we can do this.’ and it was kind of awesome,” sophomore criminology major Lindsay Flynn said. She has been a member of the group since last year, and solo’d Michael Buble’s version of “Feeling Good” for the competition.

“To have a solo and be on that stage in front of all of those people, I was incredibly nervous,” Flynn said. However, by the end of their set, she felt so good. “It was a lot of fun, [and] I would love to do it again.”

Though Mason Some Noise won best arrangement last year, the group did not advance to semifinals.

“I’m the one who arranges all of the music as well, and last year was really my first time arranging that style of music of a capella, and the way I sort of think about it is that I had a lot of good ideas but I didn’t know how to execute any of them,” Belcher said.  “…It was bad writing, and so when we didn’t advance last year I was really determined to improve the writing and take a hard look at all the things that didn’t go well.” 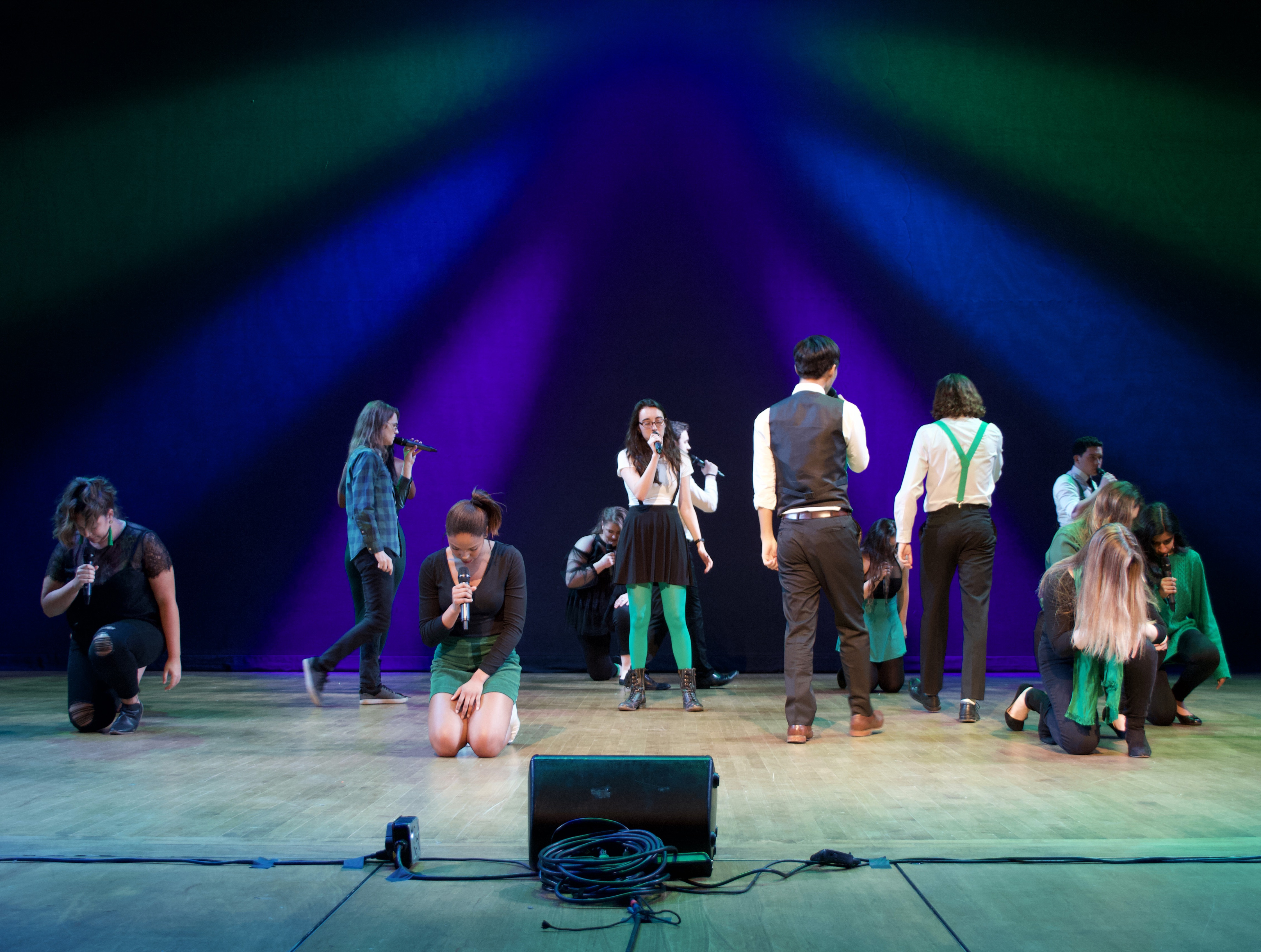 Their achievements this year reflected it. As well as going onto semifinals, Mason Some Noise was awarded Outstanding Soloist for Jason Nesmith’s performance of “I Have Questions,” Outstanding Vocal Percussion for Belcher and Outstanding Choreography for “Thief” designed by Daniela Casas.

“I feel like we all trusted that we put what we needed to put on that stage in order to get the score and we were all hoping we would move on,  but I don’t think any of us really had that reality that we would actually do it,” Casas, a junior theater major as well as choreographer and treasurer for the group, said.

As this was the first year that the Patriot Pitches attended, they got inspiration from several different sources.

“We tried to model sort of how we were doing things off of the sets of previous years of ICCA’s, ‘cause a lot of them end up going up on YouTube …,” Lazo said. “And performing there was sort of one of the highlights of being in this group, just because it’s the culmination of the past three years of effort putting into it, like myself and eight other seniors that are in our group.”

“It just feels better to have your group, or in this case I kind of think of it as my family now,” Flynn said about their performance. “It’s kinda nice to have your family there supporting you as well.”

For the group, this year has been one to help prepare them for what next steps it needs to take in order to become more successful and move forward in the future.

“This is a big [year] of learning and growth,” Lazo said. “Part of that is the mentality that this year’s executive board went into this year. Having the ICCA’s as an overarching goal, it’s like, ‘Okay, well, what are other groups that are at the ICCA’s doing that we could also be doing?’ or like ‘How are we gonna be able to build this culture and this legacy?’, especially having the number of people that we will leave the group this semester.” Ten members including Lazo are set to leave the group after this semester, with an 11th potentially leaving as well, of the 18 current Pitches. 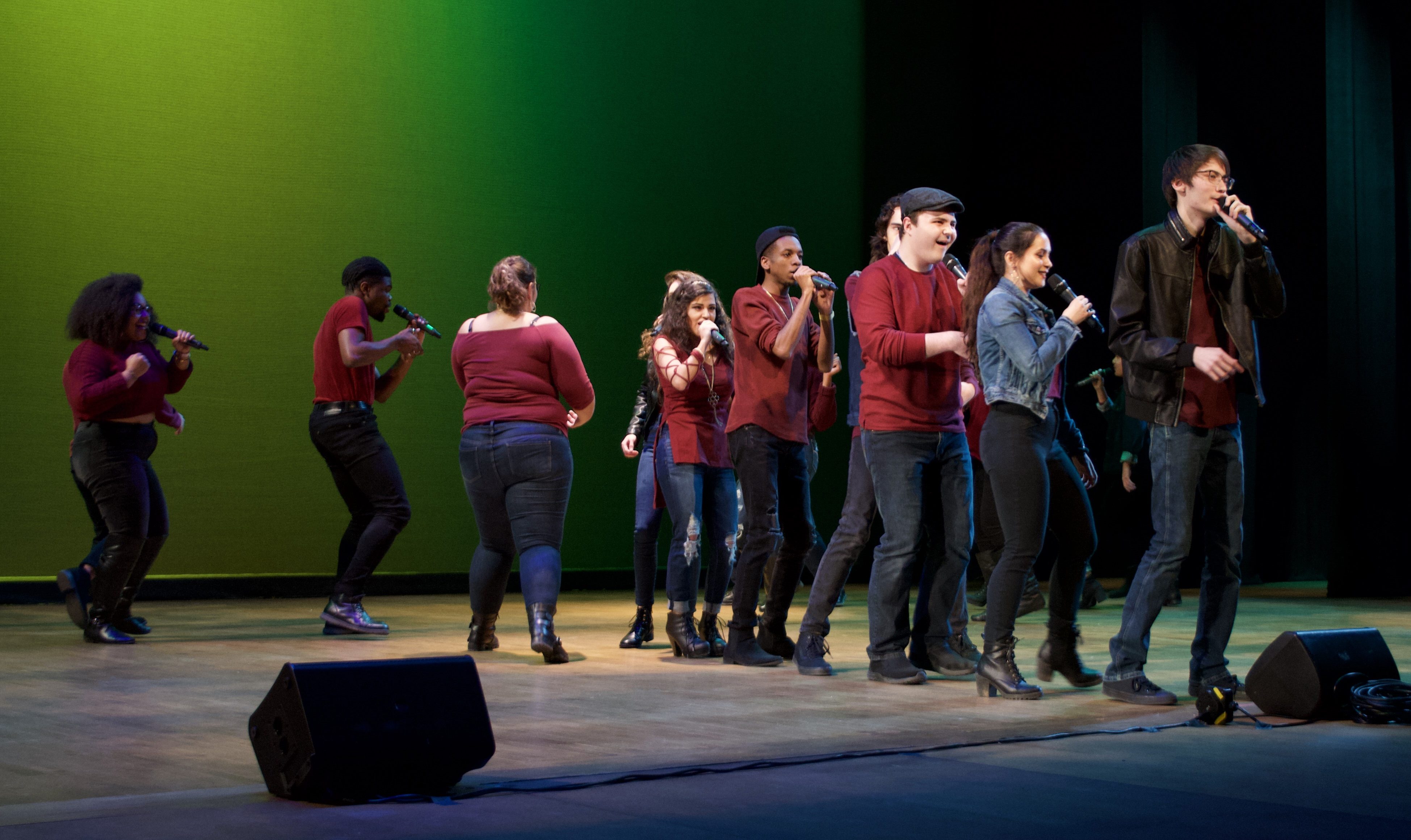 “We didn’t really expect to place necessarily, it is our first year, but … we actually received quite a number of compliments being our first year from groups that have performed in the ICCA’s or just been in the ICCA’s in the past,” Lazo said. “They were like, ‘This is a little better than most groups do their first time, you guys should be really proud of it.’ and we were like, ‘Yes, did it.’”

Since several members of the group are leaving after next semester, the Patriot Pitches are preparing for a semester of preparation and regrowth for next year, including occasional performances and learning a boy band medley that includes One Direction, NSYNC and Backstreet Boys.

“I hope that we start at least preparing and or talking about next year, ‘cause we have half our group graduating, ‘cause they’re seniors, so we are starting auditions …,” Flynn said. “It’s gonna be fun to bring in new people but also kind of scary for next year ‘cause we’re losing that many people. It’s just gonna be a big change but I think it’ll be fun.” With all of the the enjoyment she gets from being a member of the Pitches, Flynn will be staying.

Mason Some Noise is preparing for semifinals on March 30 at The Grand Opera House, as well as other performances they have scheduled over the semester.

“Last year was such a learning experience,’cause we never prepared for a competition before,” Belcher said. “And so it was a lot of new things we had to learn along the way about how to prepare, and now it’s really that all over again. We’ve never had a set that has clearly been good enough to win something and then still need to make improvements on it for another round, so that’s a completely different beast, and we have some thinking to do.”

Spiderman, Miku and Pikachu Walk into a Bar…

A Bridge Between Japan and America