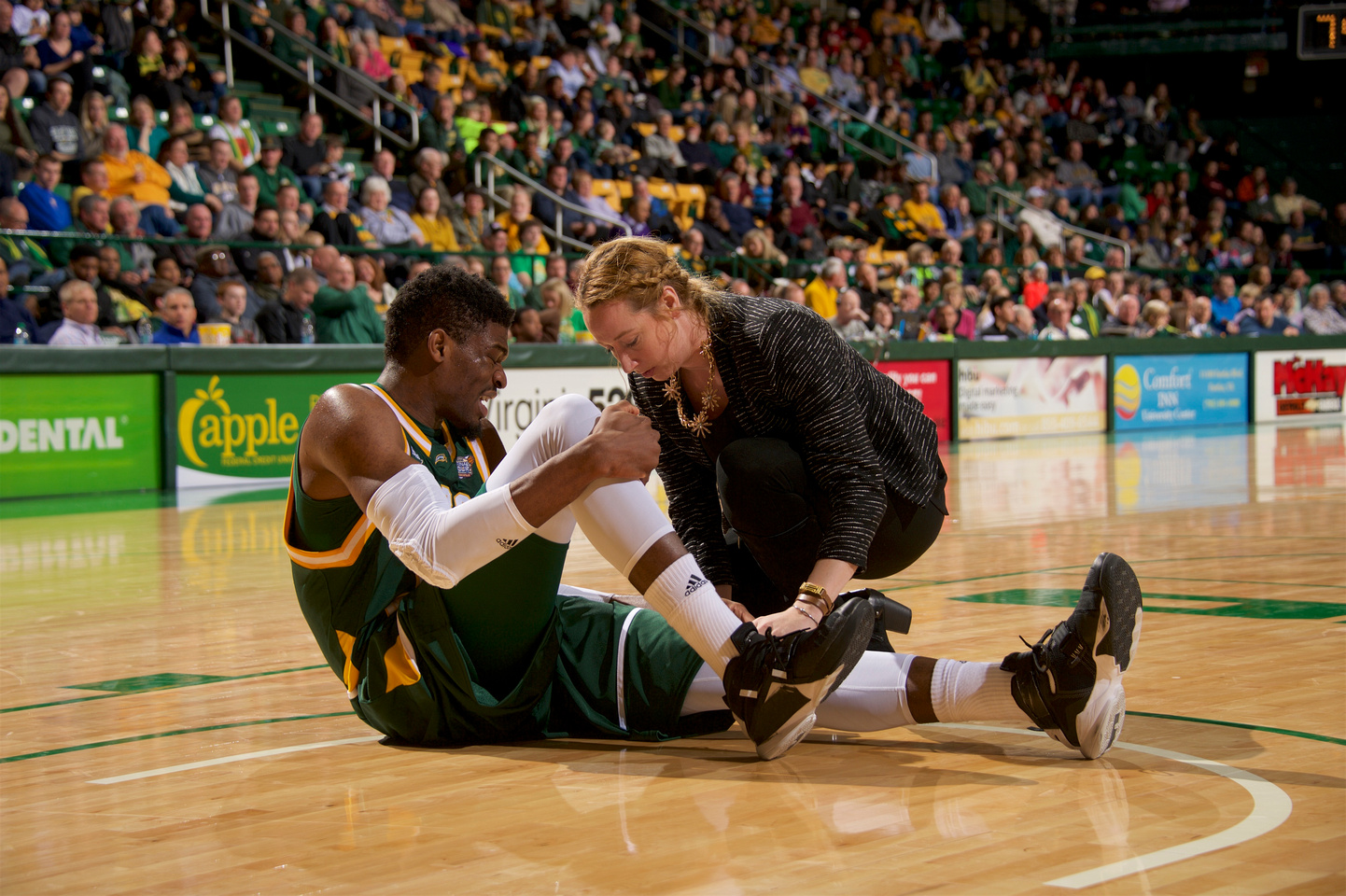 Of the 353 NCAA Division I Men’s Basketball programs across the country, a mere 28 of them currently have a female athletic trainer—7.9 percent.

Mason’s Men’s Basketball team boasts one of their own in Rebekah Schmidt, who was promoted to associate head athletic trainer role in August 2018 after joining the university’s athletic training staff in 2014. Schmidt also works with the Men’s Tennis team.

“It’s a badge of honor, because you’re so few,” she remarked. “At most places, Division I Men’s Basketball is the premier sport, so being at the premier level and being the face of that sometimes―it’s nice to be one of the few females.”

However, Schmidt’s introduction into the field of athletic training was not as pleasant. In high school, she suffered a hip injury that developed into hip dysplasia and a torn labrum. A negligent athletic trainer at her school attributed it to her being “a weak girl” and told her that she “should just suck it up.”

“I’ve had three major hip surgeries since then, so I just knew there had to be better professionals in the field,” she said. “I knew other people had issues and wanted to be heard, and I wanted to be a better advocate for those people.”

Schmidt got her start at Marist College in New York, where she served as assistant athletic trainer for three years and worked directly with their Men’s Lacrosse, Men’s and Women’s Swimming and Diving, and Women’s Soccer teams. She also assisted with football. However, she never envisioned being part of a basketball staff.

“I actually hated working basketball when I first started,” Schmidt said. “I just thought I would get bored with 15 people, and that’s young, naïve and not realizing everything goes into it, compared to when you have 100 people on a football team.”

The close-knit environment of Mason’s Men’s Basketball program enables her to have a better understanding of each player’s medical history, down to the particulars like food allergies and other specificities.

“You just know so much that you can give such detailed and well-balanced healthcare that, when you have 100 people, I won’t know every single thing about that,” Schmidt said. “It’s just impossible.”

Before coming to Mason, Schmidt spent a year in the Sunshine State Conference as assistant athletic trainer at Barry University in Miami, Florida, where she worked directly with their Men’s Basketball and Baseball teams.

During her time at Barry, she administered rehabilitation programs, imaging for student-athletes, injury-tracking software and new concussion management documentation, as well as teaching two classes as an adjunct professor.

Making the jump back up to a Division I university can offer a change of pace, especially when a school is transitioning into a new conference. Mason joined the Atlantic 10 in 2013, presenting a new challenge for those involved in the university’s athletics department, especially for fresh faces such as Schmidt.

“The A-10 was definitely a step up from where I was working,” she said. “Barry’s a DII school, where they’re highly competitive, but it is DII. It is a challenging conference to be in, and that puts more pressure on everybody associated with it.”

As associate head athletic trainer, Schmidt’s primary responsibilities are assisting players in the rehabilitation process as well as working to mitigate future injuries. 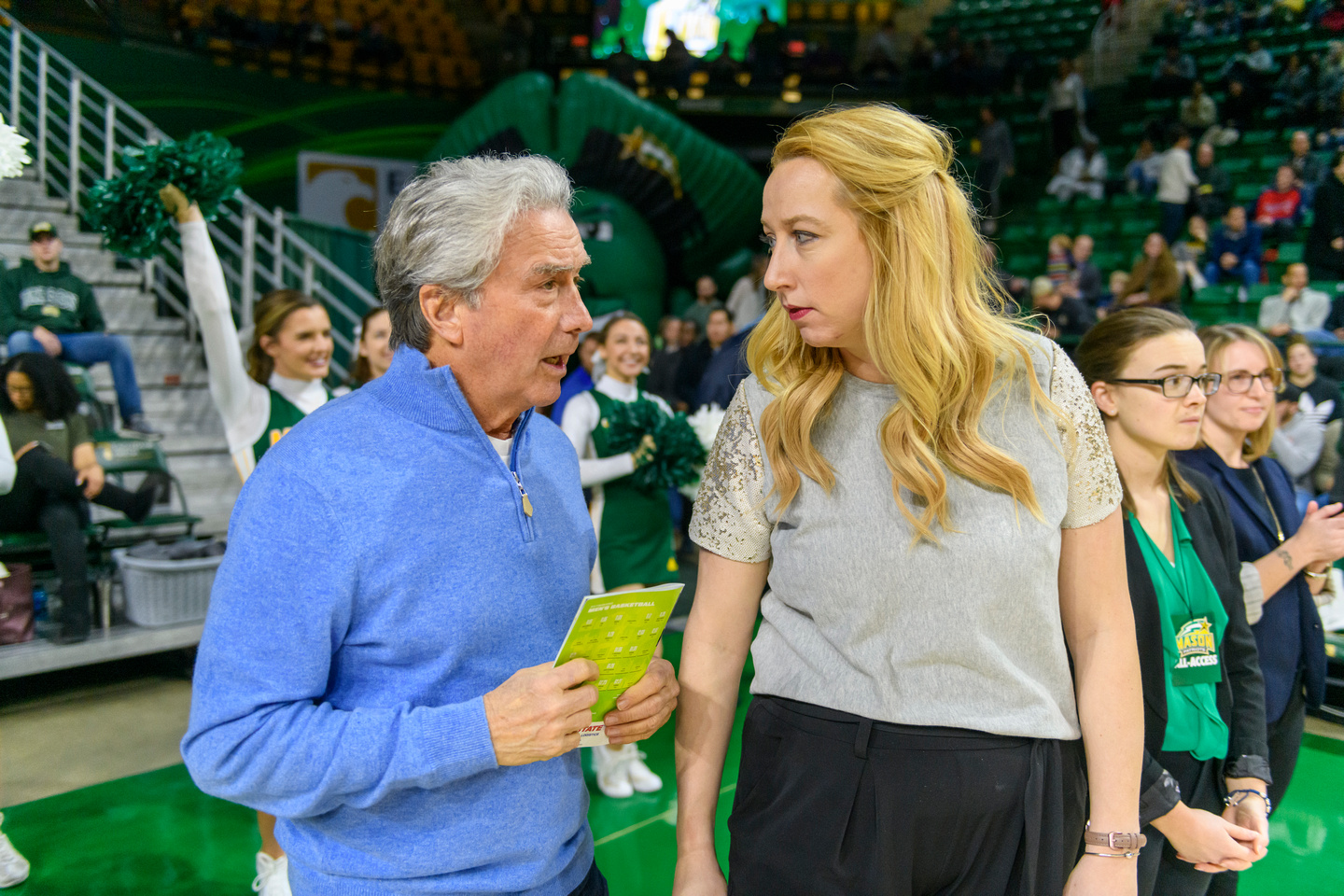 “Prevention is obviously a huge deal,” Schmidt said. “It’s not just when the injury happens, [and] we’re rehabbing it and figuring out what’s wrong and fixing it. It’s also about, ‘What can we do to prevent any of these injuries from ever happening?’ We do a lot of functional movement screens looking at what they are predisposed to.”

“If you’re not in this every day, you don’t know what’s involved with that,” head coach Dave Paulsen said.

He continued, “There’s hardly ever a day off for her, but I think she loves it. She’s got a great rapport with these guys, and they really respect her because they know she’s very qualified and good at what she does, but beyond that, they know how much she cares.”

Schmidt has been a constant source of support for redshirt junior Jarred Reuter, who was forced to sit out last season due to the NCAA’s transfer rules.

“For me … it’s probably at least 45 minutes with her every day since I’ve been here, so she’s been incredible to work with,” he said. “Just the amount of time she puts in, and of everyone, she probably doesn’t get much recognition. She’s in there early, at least an hour before every practice and an hour after every practice, solely to take care of us. She’s incredibly appreciated here. It might go a bit unnoticed outside of the program, but within the program, we truly value her.”

This season the Patriots have faced injuries to two of their starters, Jaire Grayer and Goanar Mar. Grayer is struggling to come back from an offseason operation on his foot and Mar suffered a foot fracture in early January.

The rehab process is long hours for Schmidt and the players, but they work hand-in-hand with the strength and conditioning department to get back on the court as soon as possible.

Working at the collegiate level allows Schmidt to adopt a role as a parent-away-from-home for the athletes she oversees, compared to the professional level, where the occupation of an athlete presents a risk/reward scenario of contracts and player health.

“[What] I like about Mason is I would never want to work in professional sports or that next level,” she said. “At this level, I get to always make the best medical choice for my athlete. … As much as they’re adults in college, they’re still kids, and I get to look out for their long-term wellbeing.”

Being a part of such a limited group within Division I Men’s Basketball is an achievement that Schmidt takes pride in, but she is quick to acknowledge the work of those who have come before her in paving the way for other women to have a place in men’s college basketball.

“It’s definitely a unique experience, and I definitely give credit to those who came before me,” said Schmidt. “Mason has had female athletic trainers for a while, starting with Debi Corbatto, who was here during the Final Four [run], and now she’s our senior associate athletic director.”

However, not everyone whom Schmidt encounters is as welcoming and respectful as those at Mason and in their conference as a whole.

“You do get the old-man society a lot, and most male men’s basketball athletic trainers are the 60-year-old men that have [been] in the field for a really long time,” Schmidt said. “You’ll get the eye, or I’ll get questions about, ‘Are you a GA [graduate assistant]? Where’s the actual athletic trainer?’ So you’ll get some of that. But also, I’m a strong woman, and I know that I have the knowledge base, and I know that I’m good at my job, so those little comments don’t mean anything to me.”

For Paulsen, Schmidt’s status as a woman is not the defining factor when it comes to her work. “She’s just really, really good. I’ve been fortunate to have some good athletic trainers, but none have ever been better, I can say that,” he said. “Yes, she’s a woman, but you don’t think about, ‘We have a female athletic trainer.’ We just have an unbelievably good athletic trainer.”

Schmidt’s advice for younger women who are looking to enter an industry where they are underrepresented is about how you conduct yourself as well as paying respect to the trailblazers in your respective field.

“The way that you hold yourself, and if you hold yourself as a professional, people are going to see you as a professional no matter your gender,” Schmidt explained. “I also think that finding mentors and making sure that you give respect to those people who come before you, that helps you a lot on the way, too. One of the first female athletic trainers [Carolyn Greer] was at San Diego years ago, and Georgetown [has] one of the first [female] men’s basketball athletic trainers [Lorry Michel], and she definitely paved the way for me to be where I am. So you have to give credit to those people, and that can be for any field.”