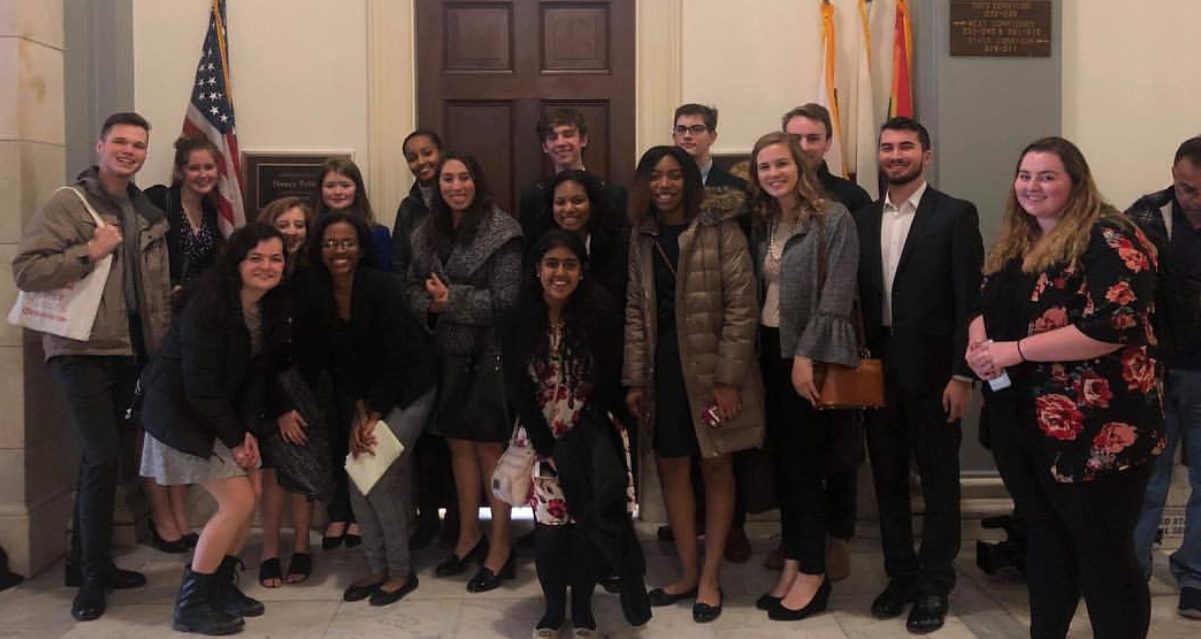 Students Demand Action (SDA), an organization focused on establishing a space for college students to voice their concerns about current gun safety legislation and protection, present personal stories involving gun safety and lobby for new, comprehensive legislation themselves, was established at Mason this past fall.  With this goal in mind, they visited the Cannon House Office Building in Washington, D.C. on Tuesday, Nov. 28 to meet with Nancy Pelosi.

Pelosi is expected to resume her former position as Speaker of the House when Democrats regain the majority in January. If this happens, she would have a critical position on future legislation, including gun safety. As the amount and severity of shootings in America in the recent past has risen, with CNN listing that three out of the five deadliest shootings in American history have occurred in the past five years, legislation on this topic will likely occur in the next legislative session.

Unfortunately, SDA was unable to speak with Pelosi. They met instead with her legislative aide, Matt Ramirez.

To begin their hour-long meeting with Ramirez, various students told personal accounts of their experiences surrounding gun violence in order to both establish their connection to the issue and explain why gun safety is so important to them. These stories opened up discussion for SDA members to ask questions about various topics surrounding gun control, with Ramirez answering.

Questions were planned in advance so that they would touch on each of the five points of a plan they created before the meeting. The points included protecting kids and communities, combating daily gun violence, creating a better background check system, disarming domestic abusers and holding the gun industry accountable.

Dickey Amendment, an amendment that stipulates that no funds that the Center for Disease Control (CDC) are given can be used for advocating or promoting gun control, was also mentioned in the conversation.

Ramirez and members of SDA were careful with their wording due to the stigma surrounding gun safety.

“Overall I was very impressed with Ramirez’s comments,” said Erica Kelly, the legislative and candidate research lead of Mason’s SDA chapter. “I was impressed that he recognized that everyone is a part of this issue, so there should be diversity in solutions. … [He proposed] solutions that are more productive and are not just for white men.”

This meeting was orchestrated by Direct Action Co-Lead Elijah Nichols. Nichols brought together the chapter of SDA at Mason, members of SDA NoVA and a small number of other organizations fighting gun violence in the area. He said he did his best to bring together as many people as he could to the event.