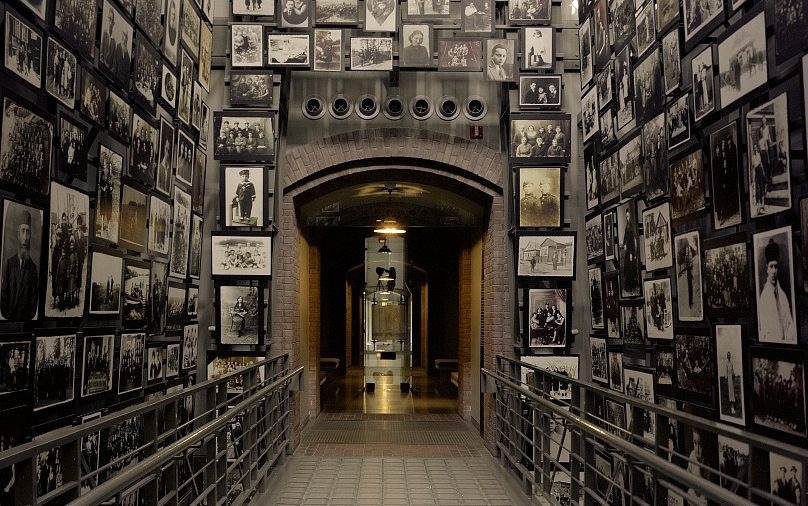 Mason Hillel hosted the annual memorial Expressions of the Holocaust Nov. 4. This year’s theme was “The Power of Hate and the Power of Love.” The room was filled with Mason students, community members and Holocaust survivors reflecting on the event’s theme.

This year’s memorial was particularly somber. The event was held a month after a nearby Jewish Community Center was vandalized with swastikas, and just over a week after a shooting at a Pittsburgh synagogue, Tree of Life, that killed 11, making it the deadliest act of anti-Semitism that has ever occured in the U.S.

Mason Hillel President Chanel Shirzi revealed that this year’s theme was inspired by the range of emotions encompassed in Jews’ experiences.

“We have experienced discrimination for 3,000 years, and the Holocaust is only one of our tragedies,” said Shirzi. “But we value community and strength and what we can achieve together.”

Expressions of the Holocaust was planned months ago, but accommodations were made to honor the victims of the Tree of Life shooting. Those killed were commemorated at the start of the event with a moment of silence after each victim’s name was read by Shirazi. Each speaker who followed mentioned the attack.

Mason President Ángel Cabrera was the first speaker to welcome attendees. Cabrera reflected on Mason’s motto, “Freedom and Learning,” and said the students who planned and helped with the event exemplify that philosophy.

Jeff Dannick, director of the Jewish Community Center of Northern Virginia, and Del. Eileen Filler-Corn, VA-41, gave personal testimonies from their experiences as Jews and public servants, and how the power of love can overcome the power of hate.

Filler-Corn asserted that there are a variety of ways to show the power of love. “Improving the world is an act of leadership and an opportunity to reflect on the past,” she added.

Kenna Laelle, a member of Mason Hillel and Chabad and co-president of the Israel Student Association, revealed that her experiences were similar to Dannick’s.

“It’s difficult for me to think that the best way to respond to anti-Semitism is with love,” Laelle said.

Keynote speaker and professor in Mason’s School for Conflict Analysis and Resolution Dr. Marc Gopin stressed the importance of minorities needing to “love each other,” and how we all should strive to “understand the dynamics of why anger yields hatred yields violence.”

Gopin continued, “We have to unite our rational part of the brain with the part of [the] brain that stores love and compassion to build a more compassionate world.”

Perhaps the highlight of Expressions of The Holocaust was the presence of seven Holocaust survivors, who shared their stories and perspectives in a fairly personal setting.

One survivor, Irene Rehbock, endured being separated from her family for years in different concentration camps. Rehbock asserted that events like this memorial help continue the conversation on anti-Semitism and how people can address it.