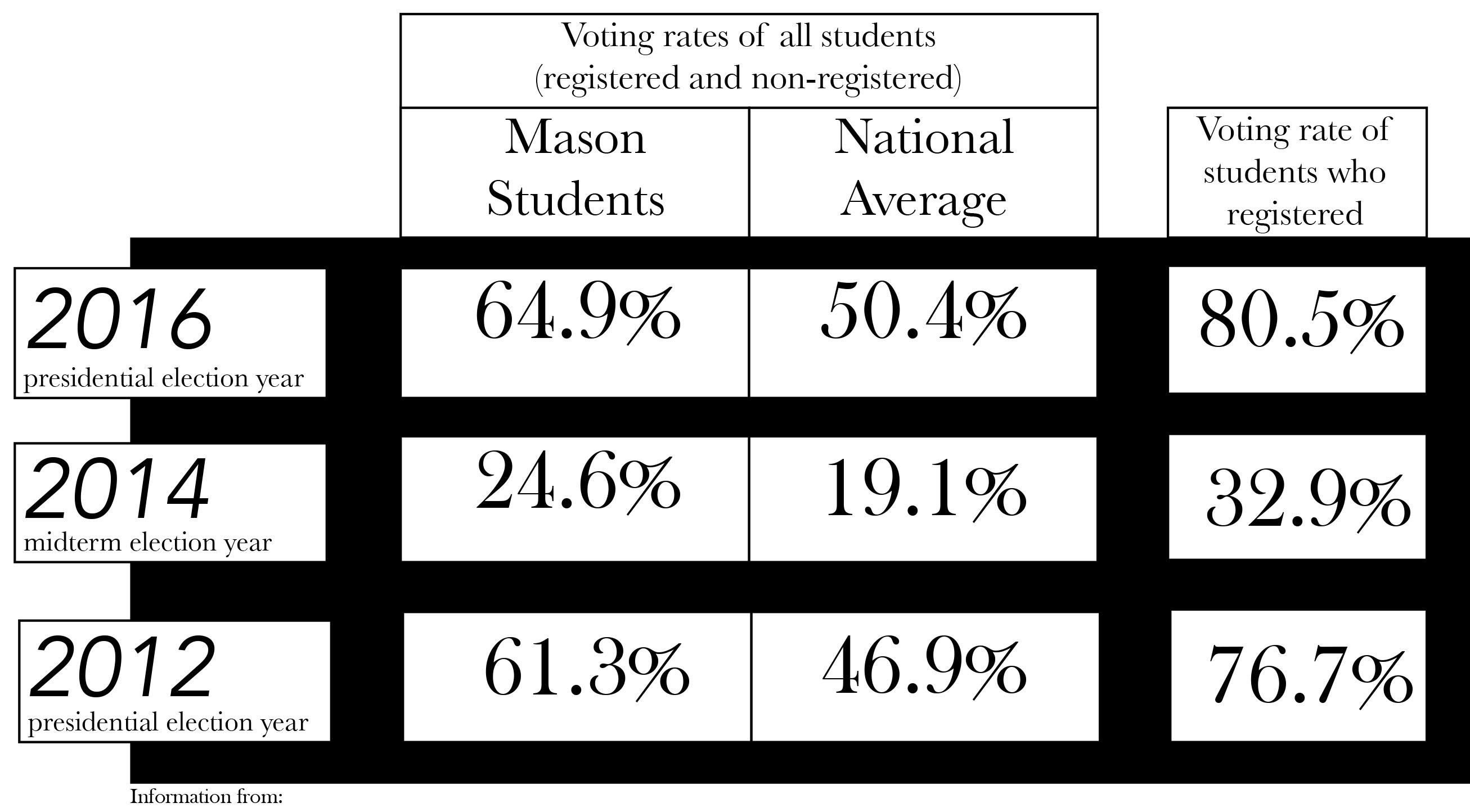 President Trump and Congressional Republicans: whether you support their actions or have been left disappointed, the 2018 midterms will serve as a progress report for the past two years. However, our democratic system is built on citizen engagement – which can be shockingly low.

Voter turnout drops precipitously between presidential and midterm elections. As reported by a Vox article in July, “only 28% of young adults ages 18 to 29 say they are ‘absolutely certain’ they’ll vote in the midterms.” MasonVotes found that “nearly 80% of eligible Mason voters turned out in the 2012 and 2016 presidential elections, while only about 30% did so in the 2014 midterms.” While Mason students vote above the national average, continuing progress is crucial to democracy.

In 2017, one ballot determined which political party controlled the Virginia House of Delegates. This November, all eleven Virginia congressional seats and a U.S. Senate seat are up for election. Multiple districts within the Commonwealth are contentious, including VA-02, VA-05, VA-07, and the tenth district – which includes Fairfax and Loudoun counties. The Democratic Party needs to gain 23 seats to flip the House of Representatives and two seats to flip the Senate. As such, shifting the balance of power runs through the heart of Virginia.

The actions of today will affect the world—our world—for decades to come. College-aged voters have the opportunity to make a difference and decide their fate. From college affordability to gun violence prevention, many issues directly affect the next generation. There is no better time to get engaged than the present.

Seen in multiple states, voter disenfranchisement and suppression continues to be an issue. Gerrymandering and narrow voter ID laws appear nationwide; not all American citizens have the ability to vote. As such, those that wield power must utilize all legal avenues to advance the democratic system.

Polls will open Tuesday, November 6 from 6 A.M. to 7 P.M.. Students registered on campus can vote at Merten Hall between that time. Activities and election polling will be occurring all day Tuesday, supplied with music and refreshments. At 7:30 P.M., the Office of Student Media will hold live election coverage discussing post-election implications for Virginia and the George Mason community. The broadcast is available on campus TV channel 8.1 and masoncablenetwork.com.

Finally, remember that civic engagement does not stop in the voting booth — there are numerous opportunities for Mason students to be active within the political process. In late January, Student Government will be holding Mason Lobbies, where interested students bus to the Virginia General Assembly in Richmond and advocate for student interests. Virginia holds elections every year, and both chambers of the Virginia General Assembly (House of Delegates and Senate) will be up for a vote. Though often overlooked, state and local elections are as crucial as federal races.

Voting is vital to a functioning democracy and holding incumbent powers accountable. Elections offer a seemingly rare opportunity to voice your opinion in your government. To quote civil rights activist and Congressman Lewis, “The vote is the most important nonviolent tool you have…. Go out and vote like you never voted before.”

The 2018 midterms will serve as a bellwether for the next two years. Be educated, be engaged and vote.

Nine Reasons to Watch the Best Game in America