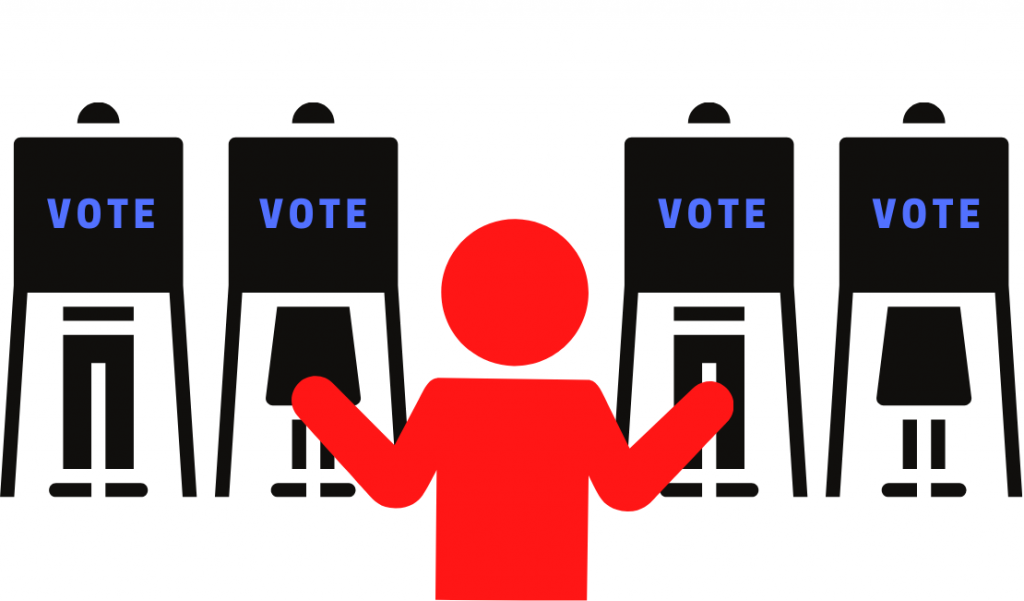 Voter registration propaganda is everywhere — it seems like every company, sport and musician is telling you to vote. Despite desperate pleas to register, politically disinterested citizens should not feel guilty for disregarding the message.

One can hardly browse social media or watch YouTube without being bombarded by advertisements that stress the need for everyone to vote. “We need all of us,” say various celebrities in an advertisement put out by Levi’s. All these campaigns are designed to get you to believe that voting is your duty and that the fate of the nation depends on it. But voting is hardly the virtue that it is made out to be.

The democratic process is not a means to salvation or healing. It fosters conflict between citizens who cooperate with one another in other aspects of life, such as work and commerce. Elections boil the population down to political affiliation and pit opposing factions against each other.

Each individual has little to no control over the effects of an election. That is to say, each vote has an infinitesimally small impact on the outcome of an election and even less on our daily lives. With millions of votes cast, the chances that your vote decides the election are vanishingly small.

Ironically enough, voter registration activists appear to not even care who votes are cast for, as long as people participate. Others acknowledge their own pessimism about their candidate, but still push forward anyway. This is epitomized by an Instagram account urging voters to simply settle for Biden.

We often hear about how this election, like many in the past, is somehow different and the most important of our time. However, those who hold power have been at this game for quite a while. Control over the White House has been shifting back and forth between Democrats and Republicans every eight years for most of the last century, with congressional elections favoring whichever party isn’t in the White House.

Voting to bring about change is counter-intuitive. It is important to remember that divisive rhetoric and harmful policy originates from elected politicians on both sides. It is difficult to imagine how simply increasing participation in the very process that puts politicians in power will bring about a new status quo.

There are several concerning themes that have characterized politics at the national level, regardless of who has won past presidential elections. Some of them include excessive spending, burdensome regulation and the aforementioned divisive rhetoric. You should not feel obligated to vote if you see these and other consequences of an election as generally unfavorable.

Those who abstain from participating in today’s political scene are a stronghold of sanity in an incredibly polarized time. Maintaining focus on aspects of life that we have some degree of control over, such as our work, family and friends, makes a more tangible impact on others than rallying the masses to get behind a candidate. The disastrous first presidential debate should serve as a prime example of how uncivilized politics can be.

Pledging support for either side on the ballot helps to feed the frenzy more than improve it. Those who are still holding out on registering to vote should be content with their status as modern-day political dissidents.

Homesickness has a new meaning, and a new cure