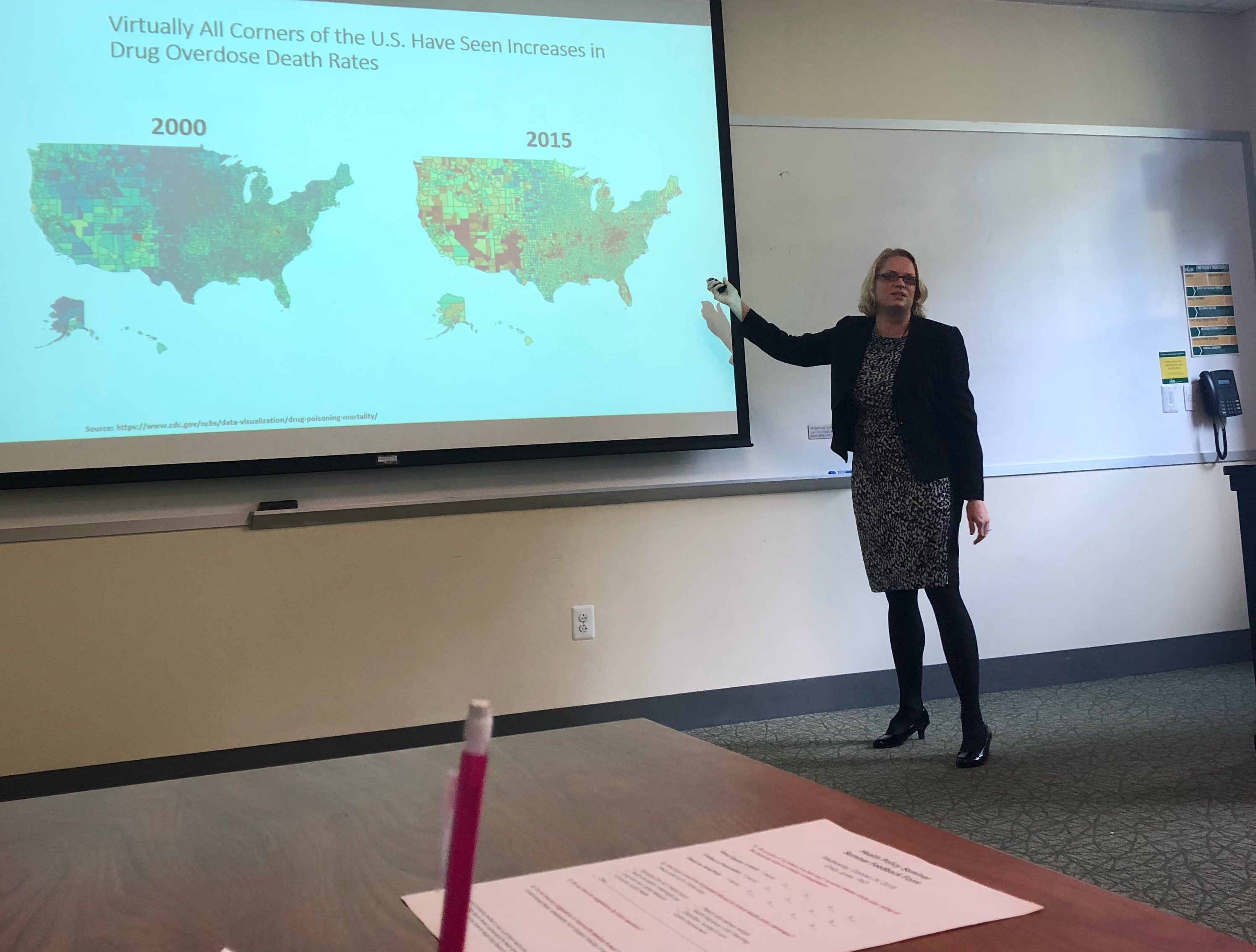 According to the 2016 National Survey on Drug Use and Health, 116 people died every day from opioid-related drug overdoses. Emily Jones, chief of the Science Policy Branch of the National Institute on Drug Abuse (NIDA), works every day to fight this crisis on the federal level.
Jones gave a presentation at Mason Wednesday, Oct. 24, on the opioid crisis and the NIDA’s role in addressing it. The presentation was part of health seminar series sponsored by the Heath Administration and Policy Department and the Center for Health Policy Research and Ethics.
Jones outlined three key activities that the U.S. Department of Health and Human Services (HHS) is using to fight the opioid crisis.

First, the HHS is changing opioid prescription practices with the goal of reducing opioid use disorders and overdoses. The second tactic is to expand the use of naloxone, which is used to treat opioid overdoses. Finally, the HHS is working to expand the use of medication-assisted treatment (MAT) in order to reduce opioid use disorders and overdoses.
Jones also mentioned in her presentation that the NIDA received an extra $500 million for their base appropriations for the 2018 fiscal year. The funding will support scientific research on addiction and pain.
“[A heroin vaccine] is something we are working on,” Jones said. “I don’t think it would be deployed widely, but it would be deployed for people that already have a problem. The science is not even close, but it’s a pretty picture and it’s something to think about―another way that science can help with this crisis.”
Jones said that key factors driving the opioid epidemic include rapidly rising prescription costs and pharmaceutical companies promoting their products. She also noted that many therapeutic options to treat pain are not covered by insurance.

Jones then went on to advocate for more collaboration between the criminal justice system and community-based treatment providers in order to improve care.
“I think that it’s the defining epidemic of our generation,” said Hope Sievers, a junior at Mason. “I think that as college students, though we are less likely to be addicts and [drug] abusers, it’s common [enough] that everyone knows someone affected by the opioid epidemic.”
Sievers, a global and community health major, hopes to help end the opioid epidemic through her work.

“I want to change medical-school requirements and policies regarding how we treat chronic pain and look at providing alternative therapies,” Sievers said.
Legislation was recently passed to address the opioid epidemic. On Oct. 24, President Trump signed the SUPPORT for Patients and Communities Act, which he described as “the single largest bill to combat the drug crisis in the history of our country.” The bill will increase federal agencies’ funds for addiction treatment, as well as the training of law enforcement to intercept shipments of controlled substances such as the synthetic opioid fentanyl.