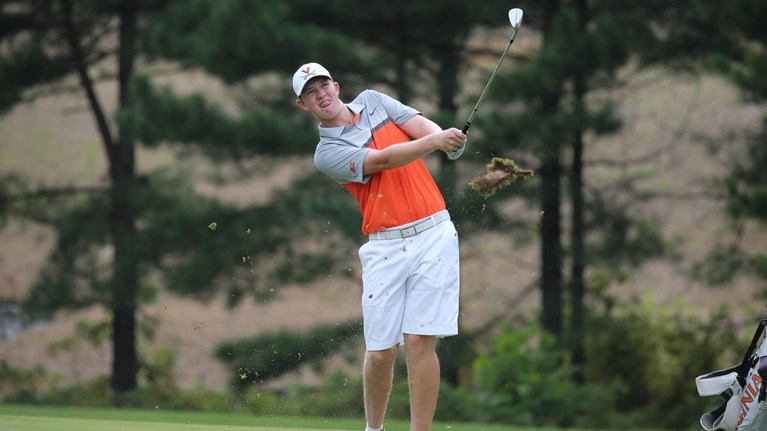 The Mason Men’s Golf team received a large boost to their program this summer when northern Virginia native Connor Messick committed to a one-year graduate program at Mason for sport and recreation studies with a concentration in sport management.

22-year-old Messick graduated from the University of Virginia in May with a degree in sociology. After red-shirting the 2014-2015 season, Messick helped the Cavaliers golf team reach an NCAA Regional each of the last three years. This included helping the team qualify for the NCAA Championship in 2016 and 2017.

Messick seeks to bring leadership to the young Patriots team.

“Since I’m kind of an older guy now, I try to lead by example,” said Messick. “I’ve done it with some of the freshmen. One of my first goals coming in to Mason was how I can have an impact on those guys. I knew it wasn’t my team coming in … so I made it a point of mine to go out and play with the freshman early on and make them feel comfortable.”

Messick grew up in Oak Hill and graduated from Chantilly High School after helping the Chargers win the State Championship in 2013 in addition to earning All-State Honors individually.

Messick sees a lot of potential in this current Patriots team.

“My personal goal for the team would be to win [the] conference, compete at regionals and maybe shock some people that don’t expect us to make it to NCAA’s,” he said. “I’ve seen teams that have had the talent to go to those type of tournaments and I can see that if our top five guys are playing the way we’re capable of, we can definitely accomplish those goals.”

Messick involved himself with the sport at a later age than most Division I golfers. His grandfather turned him on to the sport at the age of 12.

“When my parents traveled for work, I was always the little guy wanting to hang out with my older brothers, and they’d always give me a hard time,” said Messick with a laugh. “They’d let me play with them, but only if I didn’t tell our parents.”

Messick credits his family for motivating him to hone his natural athleticism after growing up playing basketball and baseball.

“Now, as we’ve gotten older,” he said of his brothers, “they’re really trying to push me to get better and to pursue my goals of playing professional golf.” 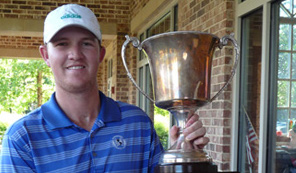 Scott King, who is in his thirteenth season as the head coach of Patriots golf, believes Messick has already impacted the team.

“He’s definitely helped us right from the beginning,” said King. “Some of the younger guys look up to him and ask him about what it takes to be successful in college golf … He adds the extra leadership that we need.”

According to Coach King, becoming a pro golfer is certainly possible for Messick.

“I’m sure that’s his goal,” said King. “He has all the tools, a good team around him. He’s very capable…He definitely has a shot.”

Although Messick hopes to follow his professional aspirations, for now, he is focused on the present.

“I wasn’t ready to play professional golf this year, at least not to do the kind of things I want to do,” said Messick. “My ultimate goal is to make it to the PGA tour. That’s down the road, three, four years. Before that, I want to keep my mind set on winning tournaments here at Mason.”

Next, Messick and the Patriots will look for back-to-back tournament wins at the Wolfpack Intercollegiate on Oct. 6 and 7.

View all posts by Bryce Valliere →

An Athlete. An Academic. An Inspiration.