Sometimes all you need to tell a story is a few words, and maybe an expo marker.

On April 11, Mason hosted an event called Dear World. The event was split into three sessions, two of which were the workshop portion, and the last being the “unveiling” of all the photos taken during the two sessions and the stories that came with them.

Dear World is a project that started in New Orleans after the BP Oil spill and was started by Robert Fogarty as a fundraiser to help those affected by the oil spill. Set up in bars and similar places, people would write “love letters” to New Orleans said Fresh Johnson, the program leader for Dear World. That was changed by a man named Ralph Serpas.

“When Ralph Serpas came in with ‘cancer free’ written on his neck, it kind of changed it because it had nothing to do with the oil spill, it had nothing to do with New Orleans. It was based on his own personal experience from his battle with cancer and finding out he is cancer free,” said Johnson. For Dear World, and Fogarty, this was a turning point after seeing other people interacting with Serpas and asking about his message instead of the picture he had taken. 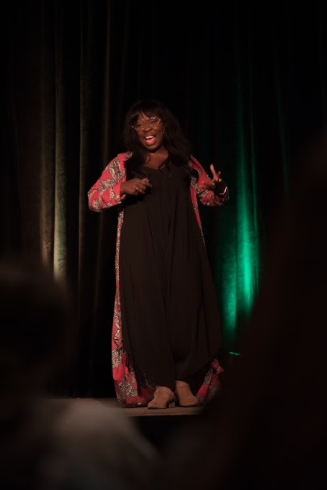 Returning to Mason for their third year, Dear World walks participants through five stages in order to narrow down to one moment in their life and from there into one message that was then written on them in expo marker. Participants then took a picture to share their story.

Franca’s her story began in her senior year of high school when she auditioned for the role of Tracey in the broadway play, “Hairspray”. After not getting the part of Tracey she was instead given the role of Prudy Pingleton, Penny Pingleton’s mom, and decided to play the role to the best of her ability.

It was at that point her, “connect” partner, Ferguson wrote “I’m going to be the best me,” which Franca had said while telling her story to Ferguson. This ended up being the message she had written on her in expo marker.

Ferguson’s story was the story of how he came up with his drag name, “Heroine.” Ferguson struggled to come up with what he wanted to call himself until he listened to the song “Kung Fu Fighting” by CeeLo Green. In Green’s song, one lyric reads, “You’ve got to be your own hero.” This became his inspiration for his name and for Dear World.

Another student, senior Spencer Gee, whose message read, “I found my passion in creation” said, “I worked at a summer camp, and the first time I went there they put me on a class that I had no idea what it was, it’s called ‘Project Make’, which is just like STEM education. So I helped with that class and all these kids were super excited they got to make claw machines and ski ball things, and all these really cool stuff out of cardboard….So at the end of the week I saw these kids go home with all this stuff and they were so excited,” said Gee.

Gee then continued teaching the class for three more summers after. She hopes to bring what she learned in the class Environmental Education degree in grad school.

At the last session, where all the pictures taken that day were revealed, three students were asked to speak and share their stories: Lauren Back, Alex Gamboa, and Maggie Ryan.

Back’s story came from a broken promise to her high school pre-calculus teacher to not pursue an education, and furthermore a career, in STEM. 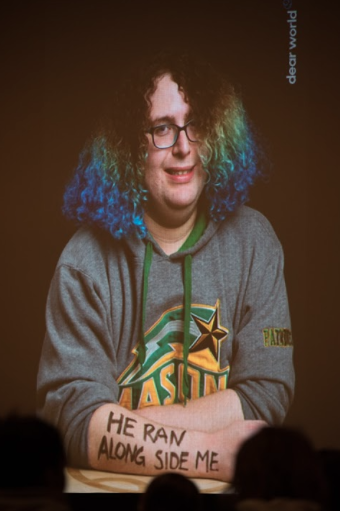 In 2016, Back added a minor in environmental science, and in 2017 she was looking at applying for her masters degree in Environmental Science with a focus in science communication and started a research project that fall.

“So yes, I broke my promise to you, Mr. Calahan, I’m pursuing STEM,” Back said when sharing her story.

Gamboa, a Navy veteran, told the story of when he was in boot camp, he failed to complete the physical test part. A division mate who saw Gamboa’s willingness to take responsibility for his failure, ran alongside him to help him pass. His message was, “He ran alongside me.”

Finally, Ryan’s story stemmed from her father’s diagnosis with Alzheimer’s. In her senior year, Ryan confided in her friend who still sends her articles on the disease in an effort to show his support a year later. “He still sends me articles,” read Ryan’s message.

Johnson hopes that Dear World helps people take away a divisive mindset, “We’re so quick to look at somebody who doesn’t look like us and start to think about how different they are,” continued Johnson, “So let’s start talking about the things that are inside of us, the things that we have been through, and who we are.”

“Keep asking people what their pictures mean, what their messages means, I feel like that’s the best way to hear the best stories,” said Johnson.