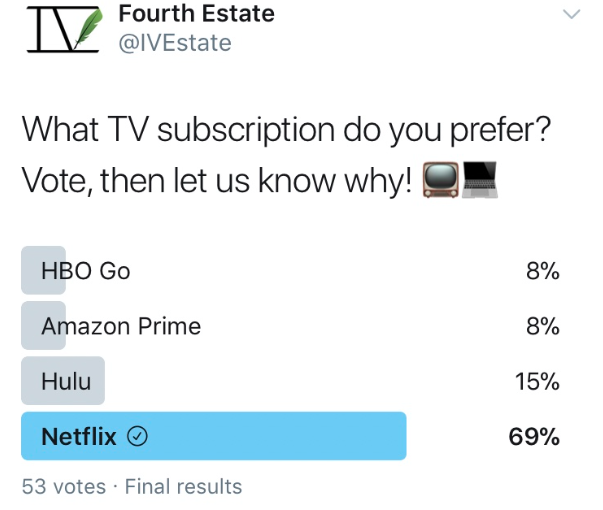 Looking for a way to de-stress during finals season? Check out what platforms are available for streaming television online!

With finals season right around the corner, students are looking for ways to destress and wind down amid the pressure of completing research papers, group projects and exams. One of the go-to methods of relaxation is watching television. However, as time goes on the likelihood of a student catching their favorite shows live on television grows slim.

A schedule that balances work and school is hectic. But streaming services such as Netflix, Hulu, Prime Video and HBO Go make it easier for the average student to either binge-watch or plainly tune into one or a few episodes of a current or previously aired television show.

In a survey conducted by the Fourth Estate on Twitter (@IVEstate), students were asked what TV subscription they preferred among the following choices: HBO Go, Prime Video, Hulu and Netflix. The results were aggregated from a total of 53 votes with 69 percent choosing Netflix, 15 percent selecting Hulu and both 8 percent toward Prime Video and HBO Go. Conducting this survey showcased the overwhelming use and preference of Netflix among students.

Netflix offers monthly subscriptions between $11.99-$13.99 to consumers. Moreover, students find themselves more on this specific streaming platform than those previously mentioned.

Ortiz said she personally finds herself on the streaming service during her free time and plays it in the background while studying, whereas Melton said she watches shows on the weekends. Her favorites including “90210” and “Vampire Diaries.”

Binge-watching television shows is not an odd tale among college students. Ortiz admitted to binge-watching programs on Netflix such as “One Tree Hill,” “How to Get Away with Murder,” “One Day at a Time,” and “New Girl.”

Alessia Andrejasich, a transfer student at Mason, said she is subscribed to HBO Go, Prime Video, Hulu and Netflix. But Andrejasich finds herself more on Netflix and Hulu. Andrejasich has binge-watched “Breaking Bad,” and “13 Reasons Why.” Her favorite programs include “Law and Order: SVU,” “Friends,” and “That’s 70’s Show.”

Netflix seems to be a household staple subscription. Many students use the platform with subscriptions they already had from home. Another popular subscription among the Mason community is Amazon Prime, particularly Amazon Prime Student.

This subscription service offers both fast delivery on items like textbooks or tech needs and a special feature called Prime Video, which is comparable to Netflix and Hulu. After a free six-month trial, Prime Student is offered at $49 a year with provision of a .edu email address.

The hit music-streaming platform Spotify is available to students at $4.99 (plus tax) a month. Not only does this include a subscription to Spotify Premium, but is also packaged with Hulu featuring limited commercials. For such a low price, students have an opportunity to listen to tunes and watch television on their own time.

HBO Go – a free service offered to Mason students living on campus – is also worth mentioning. By simply selecting George Mason University as a provider, any student at the university has free access to HBO programs such as “Last Week Tonight by John Oliver,” “Silicon Valley” and “Big Little Lies.”

Catching television programs live is growing less prominent, especially for students with hectic schedules. Platforms and subscriptions available with just a touch of a button are shifting the game for how students are consuming their television.