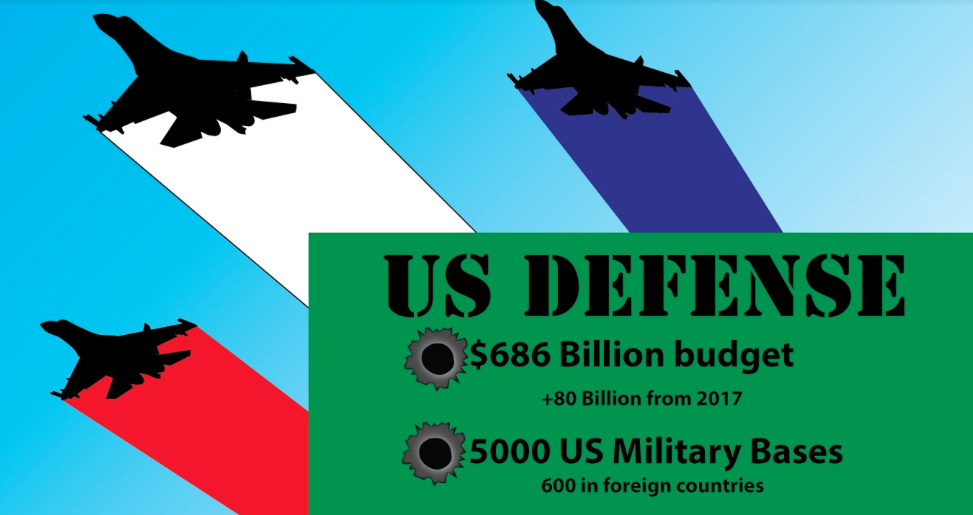 Protecting our national security should be a priority for the United States government. Whether it is through diplomacy or military action, keeping our allies and ourselves safe from rogue states, terrorist organizations and lone wolves is paramount. The hot question nowadays is, how much is too much?

According to the Department of Defense, there are around 5000 United States military bases, with approximately 600 of those located in foreign countries. This all comes with an annual price tag of $686 billion as of FY 2019. President Trump made it a priority during his campaign to, “make sure our military is the best in the world”. This likely means more spending, more bases, and more personnel. So does all this extra spending and increased presence in foreign countries make us safer?

It is hard to answer whether the extra spending, military bases, etc. makes us safer, but I do think they are necessary in many cases. There is no doubt about it: the United States has an empire that stretches across the globe. Many of us are not aware of the extent to which our military is spread. We have been told since the Cold War that these foreign bases are necessary for defense and retaliation. In a world where world-peace is a rightfully important objective, I do believe our presence in foreign countries is justified.

There are more than  20,000 troops station in South Korea, many of which are located near the DMZ – a heavily fortified border with North Korea. Although peace-talks are set to begin in the near future, North Korea remains a dangerous and potentially devastating rogue state. South Korea, one of our biggest allies in Asia, has a lot to lose if North Korea was to launch an attack, whether conventional or nuclear. The United States’ presence in the region acts as a deterrent (although some would argue it does the exact opposite), and a potential quick-action force for retaliation. In Eastern Europe, 4,500 new NATO troops (including United States) were just deployed. This military presence, again, acts as a deterrent for Russia. Many bases around Africa labeled as “lily-pads” provide assistance and support to local militaries fighting against extremist groups such as Boko Haram (Nigeria), al-Shabab (Somalia) and al-Qaeda (Libya).

Many of these bases are in response to growing threats against our allies or ourselves. I recognize that the United States spends far too much money on defense and that many of these bases are controversial (and frankly some are not needed), but there is a legitimate reason for having them.

If the foreign governments agree to the installation of military bases and the military personnel are acting in accordance with U.S. law, then I see very little reason to withdrawal completely from the majority of these countries at this time. I do believe, however, that is it important to allow local governments to take the majority of control of their defense and the United States should only be involved if it directly affects our allies or us.

OPINION: Who are anorexic people?