Delegate Danica Roem spoke about her journey “From Journalism to Politics” at Mason’s SciTech Prince William campus on Tuesday, April 3.

Roem won her seat representing District 13 in Virginia’s 2017 general election. She is the first openly transgender person elected to the General Assembly, and the first to serve in any U.S. state legislature.

She spoke to students and guests about her transition from covering the news as a local reporter, to making the news with her election victory, and now creating change through her policies to address local issues. The event was hosted in Mason’s Verizon Auditorium by LGBTQ Services and University Life to conclude Women’s History Month and Pride Week on campus.

“I know that by being a trans person in public life, succeeding in government and being a good delegate will reflect well on other trans people across the country and especially in Prince William county,” said Roem. “People won’t just see us based on our identifier… they will see us as people.” 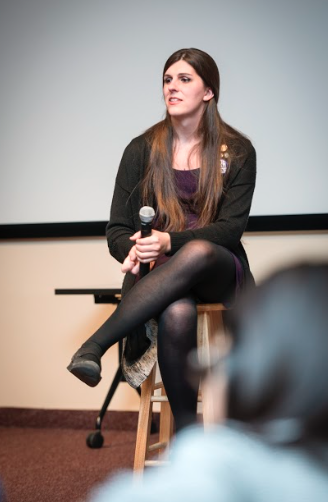 The delegate began by talking about her background and upbringing in the local community. Roem grew up in Manassas with her grandfather, who read newspapers every day and first inspired her interest in journalism.

Although she originally wanted to write about sports, Roem developed an interest in music as a teenager and began covering the heavy metal scene for her college radio station at St. Bonaventure University in upstate New York. It was at this same time that she first became involved in politics.

“At some point in late-2003 or early-2004, President George W. Bush proposed a constitutional amendment to ban marriage equality nationwide,” said Roem. “I really wanted to understand every mechanism of government possible at that point, to understand how it is possible that the president of the U.S. could try to restrict someone’s rights like that.”

Roem began her career as a reporter at the Gainesville Times in 2006. While writing there and also for the Prince William Times, she broke the favorite story of her ten-year career in journalism.

“I revealed that Amazon was the owner of the data center out in Haymarket when Dominion [Energy] officials refused to do so on Sept. 10, 2014,” recalled Roem. “That was a really good investigative story that has completely changed the narrative about how to deal with Dominion and power lines ever since.”

Roem advised students interested in government to start by getting involved with a local issue or campaign. Her own race focused heavily on transportation reform for State Route 28.

“That’s why I went down to Richmond in the first place,” said Roem. “There is no reason for us to have to leave equality at the door when we pursue public office, but we need to include a message that takes care of our constituents.”