How the campus will change by 2024

Mason has been involved with construction and renovating buildings ever since the Campus Master Plan was set by President Cabrera and faculty. The university currently spans more than 850 acres of land in eight locations.

Despite this large sum of land and resources, construction and renovation seem to leave a never-ending trail on the university.

Because Mason’s student population is only expected to keep increasing, the completion of Peterson Hall this semester and reconstruction of Robinson Hall by 2022 is expected to aid 7,000 new students and 5,300 on-campus students in 2024.

According to the 2014-2024 strategic plan booklet released by the university, the ten-year plan was created by more than 150 members of the Mason community and was based on feedback given from over 3,000 members both within and outside of Mason.

“The strategic plan outlines the university’s mission, vision and the milestones,” said Jennifer Davis, senior vice president for administration and finance. “As Chief Financial Officer, I get to work with all the universities — really looking at the overall financial plan, the financial health of the organization, what buildings do we want to put up [and] why do we want to put them up.”

By 2024, it is expected that 43,000 students will be enrolled. Because of this estimate, Mason has already been approved to receive funds from the state for the Robinson reconstruction project as well as the Bull Run project.

“We’ve said in the Strategic Plan that we’re going to build the university for the long haul. We have improved and stabilized all of our financial metrics since the establishment of this plan,” Davis said. “When you think about an institution that’s a $1 billion annual budget, 36,000 students, 10,600 employees — we need to know where we’re going, why we’re going there and what does success look like.”

Classroom shortages will increase when both Robinson buildings A and B are removed and replaced by 2022. The new building will capture the same design aesthetic as Peterson hall.

“There’s a lot of state money that’s going to pay for this project,” Director of Strategic Communications Michael Sandler said.

“Our number one priority is to be here for the students. Robinson is our largest academic building, its transformative,” Davis said. “We did a whole study on it and the decision after the analysis, after lots of advocacy from students, faculty, staff, was that the state provided about $175 million to build a new, state-of-the-art Robinson, as well as to upgrade the infrastructure throughout the whole campus.” 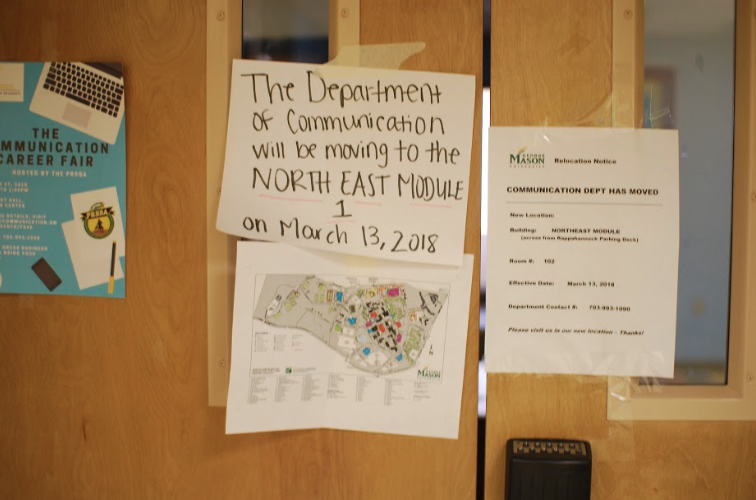 Alongside the Robinson Hall project, Roger Wilkins Plaza is also slated for reconstruction by 2022.

“We’re also reenvisioning the entire plaza… there’s a lot of tight corridors and it’s not very open or welcoming,” Davis said. “We’re doing this because we actually have to go underground and upgrade all of the infrastructure, and we got the state to pay for the aesthetic of rebuilding the plaza as well.”

Davis also explained that the university has received many donations, including a $10 million gift from the Peterson family. These donations are a major source of support for Mason, and put the school’s finances “in better condition than it was five years ago.”

Although Mason is involved in strategically planning all of the renovations to benefit student success, the increase of the student population in recent years has led to changes in accommodation. Not only are students of varying majors placed in classes throughout the different buildings across campus, but temporary classroom space is also being added.

“Our institution is poised to grow, and we will accommodate that growth through a couple of things,” explained Davis. “One is adding Peterson Hall, which is 200,000 square feet of new building, new classrooms, new places to convene for students, faculty, and staff, new research labs and so forth. In addition to that, we went to the Global Center and we’re going to take that first floor and make those classrooms.”

As for adding more classroom space for students, Mason plans to use the additional square footage out of the Potomac sci-tech campus, which is 14 miles away from the Fairfax campus.

“The state just approved another 110,000 square foot building in addition to Bull Run which can include classrooms and labs for biology and engineering,” Davis said.

As the state and donors continue to support Mason, the university is trying to meet the growing student demand.

“Our president is fond of saying that there are going to be growing pains, but it’s better to have growing pains than the opposite,” said Sandler. “We have support at the state level. This is a very good place to be in as a university.”

View all posts by Paresha Khan →

“From journalism to politics” with Danica Roem