“Survive and advance, it’s that time of year,” said head coach Nyla Milleson as she opened up the victorious post-game press conference. With their twenty-third win of the season, Mason extends their record and advances to the quarterfinals for the second time in three years.

Mason survived and advanced in their first-ever home game of an Atlantic 10 Women’s Basketball Championship, winning 89-79 against the St. Bonaventure Bonnies. The Patriots survived the Bonnies jumping out to an early 11-4 lead, and they survived a close second quarter in which the Bonnies briefly regained the lead.

However, it was Mason that took a nine-point lead going into halftime.

The turning point of this game came with 4:05 left in the first half when St. Bonaventure’s Mckenna Maycock hit a 3-pointer, the Bonnie’s fifth of the first half, to pull ahead 33-32. However, Mason would respond by going on a 12-2 run to close out the first half. Freshman Nicole Cardaño-Hillary sparked the turnaround when she forced a steal, went down the court and made a layup despite being fouled. 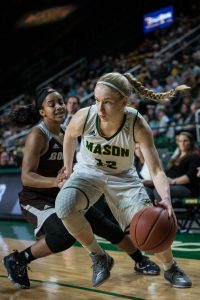 Though this win is the Patriots’ third win over the Bonnies in the last month, St. Bonaventure did not surrender easily. Nine seconds into the third quarter, St. Bonaventure’s leading scorer Mariah Ruff hit her second 3-pointer. Ruff would go on to score 17 of her 30 points in the second half.

Mason couldn’t separate themselves from their opponents during the second half. Even after the Patriots extended their lead to 15 with 6:34 left in the game, the Bonnies cut their deficit to 10 in less than two minutes. Cardaño-Hillary was instrumental in the Patriots closing out the game, as she scored eight of her 18 points in the last five minutes of play.

Sophomore Jacy Bolton led the team in scoring with a career-high 24 points — especially notable because she has scored double figures just once in her last six games. She also made a career-high five 3-pointers and completed five steals.

Asked what she did to prepare her shooting after the game, Bolton explained her pre-game process.

“I watched our season highlights right before I came to the gym and I saw myself shooting threes… I was like I know I can do this,” Bolton said. “I am so glad I took the time to watch that four-minute video because it really reminded me of what my role is for this team.”

Bolton wasn’t the only Patriot who had a career game. Freshman Marika Korpinen scored a career-high twelve points, including two 3-pointers.

“I don’t know if it’s a career high or not, but it’s… by far her best game she’s played as a Patriot,” said coach Milleson.

Graduate transfer Natalie Butler got her thirtieth consecutive double-double, a figure that stands as the third most in NCAA history. She also became only the eighth woman to reach 500 rebounds in a single season in Division I basketball history.

“You know it’s great to have individual things, but the most important thing for me right now is to have team wins,” Butler said after the game. “There’s nothing that can top that.”

The Patriots will take on George Washington on Friday, Mar. 2, at 2 p.m.