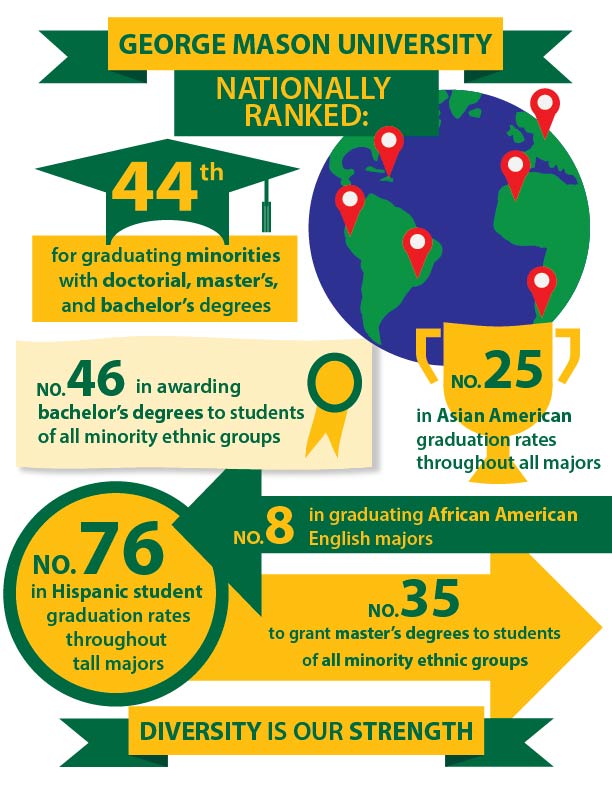 Mason has made the list of the Diverse’s Top 100 Degree Producers, a survey that ranks U.S. universities based on minority graduation rates.

Under the specific minorities ranking list, Mason was shown to have Asian Americans listed more frequently, with rankings in third for English, fourth for computer and information science, fifth for homeland security, seventh for accounting and eighth for liberal arts.

For other minorities, Mason ranked eighth for African Americans graduating with an English degree and number 76 for graduating Hispanics in all majors.

As for why Mason ranks higher for Asian Americans over other minorities, Vice President Julian Williams of the Compliance, Diversity, and Ethics office offers an explanation.

Comparing that to the populations of African-American or Hispanic students at Mason, Williams said this highlights the fact that there is still room for improvement in increasing these minorities’ graduation rates.

Williams said, “these are two groups [African Americans and Hispanics] that have historically had barriers and continue to experience that in regards to getting to higher education and then finishing.”

However, Mason does have programs that assist students who may have barriers, which will to hopefully continue to progressing the graduation rates of minorities.

“There’s two specific programs that I think are working really well for us, they’re not geared towards those specific populations but they attract naturally a lot of African-American students as well as Hispanic students, and in general a lot of first gen students. [Two such programs are] our Early Identification Program (EIP) and STEP program, which is a summer program where students will work in cohorts and live on campus before they start at Mason,” Williams said.

Along with the STEP program and EIP, Mason offers other resources for minority students to help them achieve success. Senior Orlando Johnson spoke about the Office of Diversity, Inclusion and Multicultural Education (ODIME) being a great resource and advocate for minority students.

“Within the first two semesters that I was here, I was recognized for having stellar grades … they [ODIME] really found it necessary and important to put the spotlight on students who otherwise were not recognized,” Johnson said. “It really got my foot in the door being a part of other programs and being a part of other initiatives. Right now I’m part of the Black Male Initiative, really trying to hold the retention among black men continuing to raise their GPA, and also kind of talking about black masculinity.”

Johnson added that by the time someone gets into college, they only have so many tools because the education system that they’re in ultimately does not provide students with everything they need to succeed.

Although it is possible to succeed without these tools, Johnson said, “for every [person who has had success], there’s 10 or 20 individuals who are just as smart or smarter but didn’t have the opportunities to get past.”

Johnson said that if universities invest in their students, then both parties can benefit.

“If you invest in resources that benefit students,” Johnson said, “the students will have everything they need.”