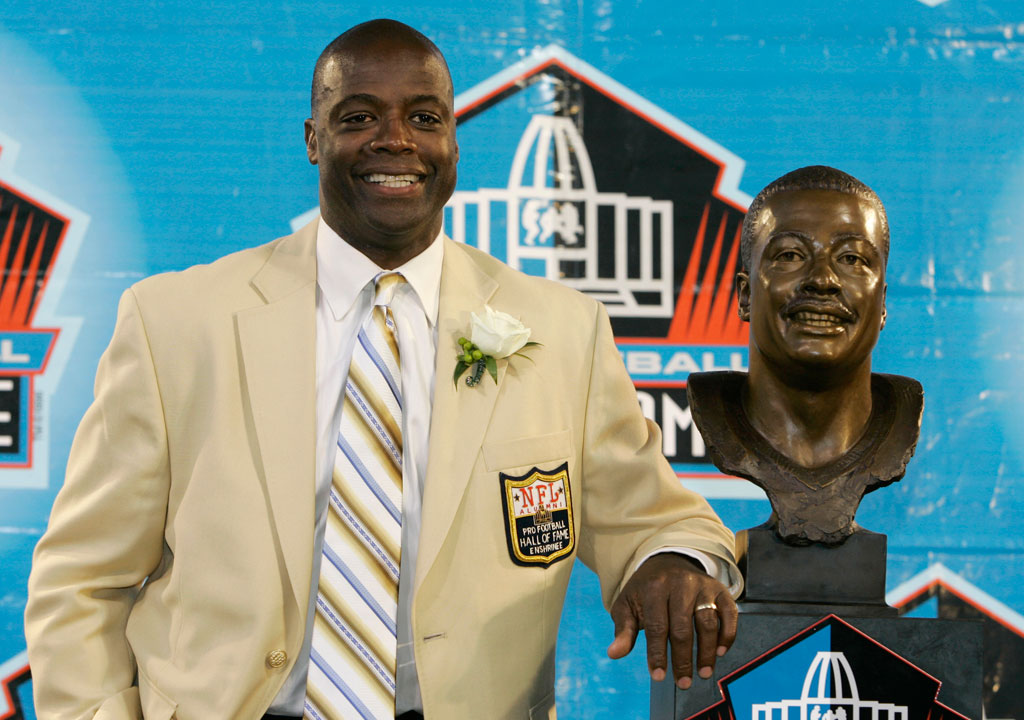 Darrell Green standing next to his bust in the Pro Football Hall of Fame during his induction. (Credit: Kiichiro Sato, AP)

Standing 5 feet 8 (and three-quarters, as he’ll tell you) inches, dressed in a green-collared shirt, dark pants and dress shoes, he blends right into a campus of more than 35,000 students and faculty.

Put a burgundy and gold 28 on his back and football cleats on his feet, and he becomes “the Ageless Wonder.”

Darrell Green has been Mason’s Associate Athletics Director since August, a role in which he will seek to strengthen the sports department. He will also help fundraise for the long list of projects and renovations the athletics department has planned.

For Green, what you see is what you get. What he says is what he means, in the most unapologetically truthful way possible. A quick Google search of his name will tell you just why, through thousands upon thousands of interviews, videos, highlights and records — and he’s not afraid to show them to you.

The self-titled “itty-bitty guy” was by stature everything the name presumes: a little guy from a little school thrust onto football’s grandest stage. From the first game Green ever played, it was undeniable that whatever he lacked in physical prowess he made up 10 times over in character and speed—lots and lots of speed.

Over a 20-year career with the Washington Redskins (a record in itself, barring kickers), Green won two Super Bowls, three NFC Championships and four of the NFL’s Fastest Man Competitions.

He was also selected to seven Pro Bowls, was a four-time first-team All-Pro performer, the 1996 Walter Payton Man of the Year Award and inducted into the Redskins’ Ring of Fame and the Pro Football Hall of Fame.

The dozens of awards and honors are only half the picture, however. Players receive awards, win championships and set records, but the greatest compliment any professional athlete can receive is the respect of their peers, both on and off the field.

On the field, the respect came from opposing quarterbacks not even daring to throw Green’s way. That meant opposing running backs, 15 to 20 yards ahead, were looking over their shoulders and knowing Green was going to get them.

The on-field respect came with every passing step. But off the field, number 28 was the same man he was on it: respected, revered, selfless and passionate.

Darrell Green was born in 1960, in Houston, Texas. He grew up on “Leave It to Beaver,” “Gunsmoke” and “The Andy Griffith Show,” shows that depict an overwhelming sense of community and characters that sacrifice their personal gains for the benefit of others, not because they have to, but because they want to.

Things like this help to explain who the man behind the myth is.

Green was a son before he ever played professionally. He was a father before he was inducted into the Hall of Fame. He was the “itty-bitty guy” before he was “the Ageless Wonder.”

The message has remained the same through his entire life. “I’ve never looked at myself in the mirror, and forgot who I was,” Green said.

With all the distractions and temptations that come with being a professional athlete, Green never wavered. He stayed true to himself.

While others have succumbed to the pressures and spoils of being rich and famous at the same time, Green saw it as just another medium to express the things he has always believed will continue to believe.

Green’s charitable work serves as the logical extension of his values. In 1988, just five years into the league, Green founded the Darrell Green Youth Life Foundation, aimed at turning children into upstanding citizens who positively influence their communities.

In 2003, Green was named chair of the Council of Service and Civic Participation under President George W. Bush. He has been a public face and community advocate in the D.C. area for more than 30 years and has served on the board of Marymount University and as an Associate Athletics Director at the University of Mary Washington.

All of this can be summed up in what Green describes as his “personal brand of excellence” — something he expects to bring to his new position as associate athletic director here at Mason.

The Hall-of-Famer believes that greatness already exists here, and it is his job to augment the winning qualities displayed by the athletic department.

Together with current Athletic Director, former teammate, Super Bowl champion and friend, Brad Edwards, the two look to continue to foster a vision and culture of success.

He stated that excellence already exists at Mason, but it is his job to “continue to foster a way of life and a vision.”

Green has kept a watchful eye on the rise of Mason ever since he moved to the D.C. area in 1983, and he has always respected the athletics and academics.

Green said he will be sure to take the same approach he took to football, his family and his community with him in however long he may stay at Mason because, quite simply, it’s the only way he knows how.

“I’m just going to come here and be what I’ve always been.”