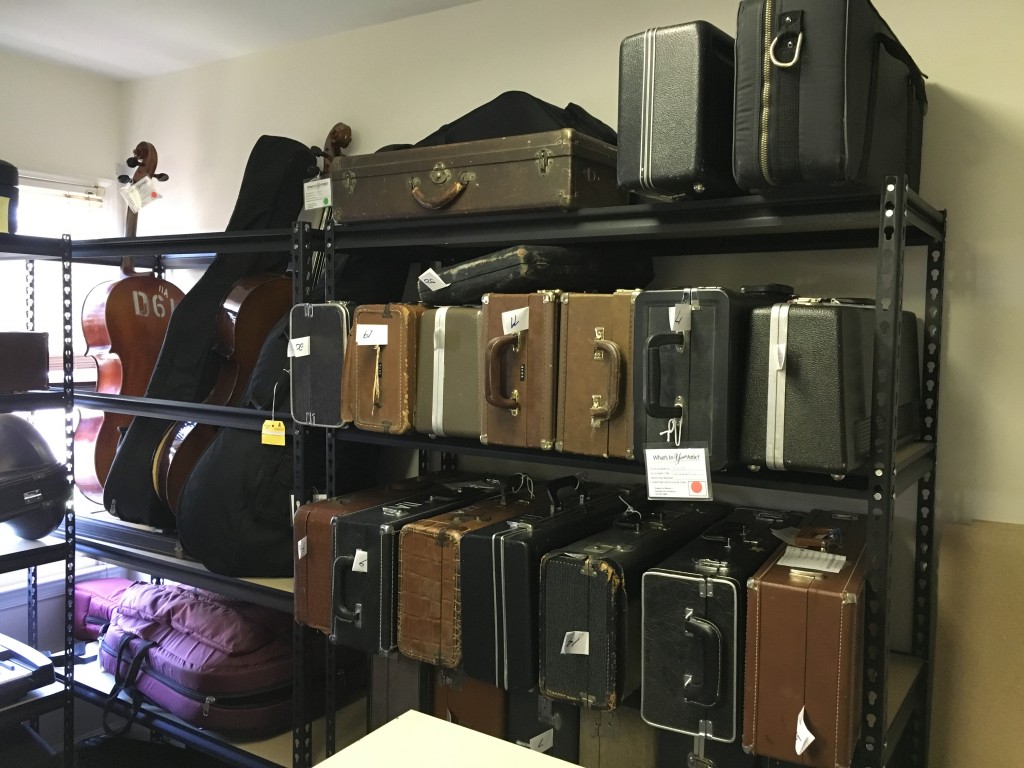 (Courtesy of Instruments in the Attic)

A new outreach program is spreading tunes in a new way by collecting used musical instruments for children and students to give them a second life.

Instruments in the Attic, first sprouted in 2007 when Mason alumnus John Paul Phaup took a methods class that required him to learn to play numerous musical instruments. Phaup realized there were not enough instruments to go around and decided to begin collecting used instruments from the local community.

In about two years, Phaup collected around 125 instruments for the School of Music.

However, as more and more instruments kept coming in, there was no one at Mason available full time to oversee their distribution. Phaup got in contact with Libby Curtis, director of the Potomac Arts Academy to discuss the future of the program and the two ultimately agreed that Potomac Arts would take the program under its wing.

Jeremy Cochran, Mason alum and an intern for Instruments in the Attic, assists with the day-to-day work of the program. He helps by making basic assessments of instruments, creating tracking tags for the instruments and keeping a record of donors.

“It’s almost like a library, you can come in and check [an instrument] out if you want,” Cochran said. “The purpose of it is to serve Mason music students who might need it for playing a second instrument or for one of their methods courses or something. Obviously for educational outreach there are a lot of needs out there for kids who want to play in band or orchestra and aren’t able to get an instrument. If anyone wants to come in here and borrow an instrument, it is available.”

Instruments in the Attic helps children in schools across Fairfax, Loudoun, Prince William and Arlington counties.

Jenna Day, co-owner of Day Violins, explained that her company supports Instruments in the Attic because she believes every child wishing to play an instrument should have the opportunity to do so.

“Part of my job [for Instruments in the Attic] is [to] go and do instrument petting zoos for the kids,” Day said. “The look on their faces when they first get to touch an instrument — when they make that first sound and they’re like, ‘Oh my gosh, did I just do that?’ and their parents are taking pictures of them — it’s [all] just so exciting. Music is just so powerful that there’s nothing to compare it to.”

“I heard it on the radio, probably 10 years ago and I thought, ‘Oh my gosh, I would love to do something like that someday,’” Day said.

Day did not get the chance to meet with Curtis for years, but once she did, the two got the ball rolling.

“We only met for maybe an hour, but in the conversation I already promised that we would repair all the instruments,” Day said. “I already committed my entire life to Instruments in the Attic. It was like all the pieces kind of fell in together and it was the perfect timing for me to help but also the perfect timing she [Curtis] needed help. All these little things fell into place.”

The program is currently taking on an international presence by reaching out to communities in El Salvador, Haiti and Costa Rica. Oftentimes, nonprofits or individuals involved in international volunteer work reach out to Instruments in the Attic for assistance.

The first time this happened, Curtis said, was the time she received a call from a Harvard medical student asking to partner with the program.

The student told Curtis that Harvard’s medical school, while building a clinic in El Salvador, had discovered a remote village with a small community arts program that needed instruments. After discovering Instruments in the Attic online, the student contacted Curtis right away.

“He came down with a van and loaded up a bunch of guitars,” Curtis said. “The doctors, as they were flying down, loaded them on with their luggage. So we got about 10 instruments down in El Salvador to help the community arts program there.”

After the Haitian earthquake in 2010, a D.C.-area lawyer contacted Instruments in the Attic to see if they would be willing to donate instruments to the relief effort. The lawyer told Curtis the instruments would be sent to Haitian church that was trying to revitalize the community through music.

Along with helping people around the world, Instruments in the Attic is also environmentally friendly, ensuring that all instruments get a second life.

“This is really is recycling on steroids,” Curtis said.

Besides donating usable instruments to musicians, Instruments in the Attic turns instruments that are past their prime into art projects. In some cases, if the instrument has historical value, staff will preserve them as antiques.

“We want nothing to go to the landfill,” Curtis said. “The point is to really recycle these things away. To find the next best use for them — hopefully musical, but maybe not.”

For example, a violin donated by the Women’s Committee at the Kennedy Center was preserved for its historical value.

“The history of it [the instrument] is that it was built in the 1800s by an Italian violin maker, and supposedly Jascha Heifetz played that violin,” Curtis said. “He is a world-renowned virtuosic violinist. So every violinist in the world wants to play like Jascha Heifetz.”

Day said that helping Instruments in the Attic is has helped her in turn by allowing her to help others.

“Instruments in the Attic is very important to me because it gives me the opportunity to give back, we’ve been so blessed,” Day said. “Literally when I heard that [radio ad] ten years ago, it was something that really struck me, and I don’t know why, some things just really strike a chord with you.”

Curtis said the program is poised to continue growing.

“It’s a building program,” Curtis said. “I think it has a wonderful life ahead of it.”

Moving from Protection to Integration