Mason is serious about research.

This semester, Mason formed a partnership with Inova Health Systems to collaborate on research in cancer, heart disease and personalized medicine. The university also achieved one of its strategic goals — moving into the “Highest Research Activity” (R1) category of the Carnegie Classification of Institutions of Higher Education. Also, Deborah Crawford was hired as Mason’s first-ever vice president of research.

In the midst of this growth, Robinson Professor of Public Affairs Steven Pearlstein published an op-ed in the Washington Post that questioned research activity at public universities. His piece was the catalyst for a panel hosted by the Roosevelt Institute in early March titled “Research at Public Universities: Do We Need Radical Reform?”

The Carnegie Classification measures research activity as it correlates with scientific and nonscientific research expenditures, doctoral conferrals and the number of science and engineering research staff. R1 schools must offer a full range of baccalaureate programs, be committed to graduate education, give high priority to research, award 50 or more doctoral degrees each year and receive $40 million or more annually in federal support. The Carnegie Classification, which was first published in 1973 and has been published seven times since, developed the classification system to support research and policy analysis.

“For Mason, earning this highest classification announces to the scientific community, funding organizations and industry partners that we have the capacity and the commitment to play a leading role in tackling some of the most pressing challenges of our time and to drive innovation and prosperity in our state and region,” President Ángel Cabrera wrote in an email to the university following the announcement of the listing. 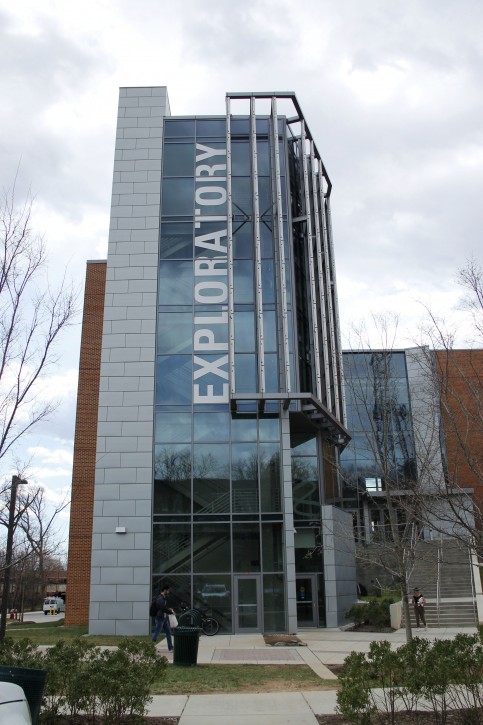 Exploratory Hall, with its many labs, is home to a lot of research. (Amy Rose/Fourth Estate)

But what does this proliferation and celebration of research mean for Mason students?

Pearlstein believes it might correlate with rising tuition, with universities tempting famous researchers with higher salaries and lower teaching loads. The consequence to teaching being seen as punitive and research being exalted is the propagation of “mediocre” research, he wrote in his op-ed titled “Four tough things universities should do to rein in costs.”

Bethany Usher, director of the Students as Scholars initiative with the Office of Student Scholarship, Creative Activities, and Research (OSCAR), believes Mason’s research environment is of a direct benefit to students, even if they do not directly participate in it.

“There are a lot of opportunities where it’s not just about research, but thinking more globally about the kinds of questions we ask,” Usher said. “We’re informed by being part of a large community where people from lots of different places come together, who are here because we’re a research university, but it creates an environment where lots of interesting things happen.”

Usher also said that research requires communication, with researchers working together and building off of different work being published in their field. Failure or inconclusive results, she said, is part of the process and cannot be used to malign the entire field.

“Being a R1 university is prestigious, but our Strategic Plan says ‘students come first.’ As long as that is maintained, I don’t think there’s such a thing as too much research,” she said. “I think being thoughtful of the research we do and they way it opens up educational opportunities is most important.”

The University of Texas at Austin released a study in 2012 indicating that students who participate in undergraduate research tend to have higher grades, graduate earlier and make plans to obtain graduate degrees. The prestige of a university and the ability to take classes from “renowned researchers” were indicated as two important points students considered when choosing graduate schools.

According to Peter Stearns, provost emeritus and history professor at Mason, the benefits of research expand far beyond the academic microcosm of a university campus. First, he said, research can lead to practical applications that lead to regional business development and economic revitalization. Second, regions with research universities attract a dynamic, talented labor force because of the actively evolving atmosphere created by the school. Finally, Stearns said, the value and prestige of the students’ degrees are increased by the university’s research, and students disproportionately stay near their alma mater upon entering the workforce.

“Mason is also committed to enhancing the economic development of the region and Commonwealth through partnering with industry and government in research and discovery that results in increased investment and economic growth,” the plan states.

Despite the economic benefits to university research, funding for public universities continues to be cut from state budgets. In 2014, the progressive policy organization Demos released “Virginia’s Great Cost Shift: How Higher Education Cuts Undermine the State’s Future Middle Class” by researchers Robert Hiltonsmith and Mark Huelsman. The study notes that from 2007 to 2010, higher education funding in the commonwealth fell from $2.07 billion to $1.62 billion, or a 21 percent decline. According to the Washington Post, Mason had a 9.8 percent tuition increase from the 2007-08 academic year to the 2008-09 year. Since then, out-of-state tuition has increased by 5.8 percent over the past five years, according to College Factual.

The decline in state funding is not a local issue. According to the Pew Charitable Trust, state funding for higher education fell by nine percent from 2000 to 2012. (Conversely, federal funding, primarily for Pell Grants, grew by 92 percent.) In Wisconsin, the 2015-17 state budgets cut funding for the University of Wisconsin system by $250 million, according to the Wisconsin State Journal. According to CBS Denver, the state proposed a $20 million reduction in higher education funding in Colorado, a state that ranked last in a National Science Foundation study for amount of state funding per student from 2002 to 2010.

Reduction of funding is not, however, a result of denigrating public opinion towards research, but rather the result of the current financial reality of the 21st century, Stearns said.

“Most states are operating in a climate where there’s tremendous resistance to a tax increase,” he said. “Then, some expenses have gone up … so if you can’t raise taxes, and you have expense categories that are going up that are out of your control, you’ve got to cut somewhere. It’s not so much that they [state governments] are hostile to us, but they have reduced their appreciation of higher education.”

Until recently, the proposed solution to lower public funding was to increase tuition, which worked until students started graduating with too much debt, Stearns said, and those students who do not benefit from financial aid or wealthy parents — the middle class — are hurt the most.

This conundrum is what Pearlstein’s article attempted to respond to and what later spurred formal conversations with the Roosevelt Institute and more informal discussions around the university.

“It is a really interesting conversation,” Usher said. “Too much of a push on research does take away from the student experience — I understand the arguments. But I think as long as we maintain the frame of thinking about research as being an educational opportunity that also has greater benefit, then that’s the way a research university ought to be looking at it.”

What does it mean to be an R1 university?

The Carnegie Classification of Institutions of Higher Education have three categories that designate the level of research activity at doctoral institutions.