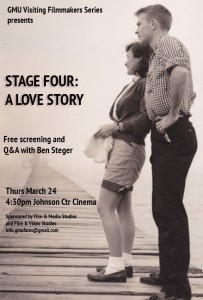 The film aired in the Johnson Center Cinema Thurs., March 24, and was followed by a question-and-answer session with Steger, who spoke about the film itself, his creative process and filmmaking in general.

Steger began production on the documentary in 2005, when he first learned of his mother’s diagnosis. The film won the 2016 Best International Feature Length Documentary Award at the DOCfeed Documentary Festival.

Steger, who said he was in eighth grade when he realized he wanted to be a filmmaker, said the film was largely inspired by growing up in a family that loved to tell stories. Steger said he sees documentaries as “a very free and improvisational way” of sharing these stories.

Through interviews with Mary Jo and George, “Stage Four” delves into many topics relevant to aging — like how to accept growing older, preserve family togetherness and keep love alive — and therefore has a lot to teach viewers. Mary Jo speaks in the film about how love is a choice and that we must keep loving people no matter how they change. The couple also spoke honestly about their regrets. George said he regretted taking Mary Jo for granted, while Mary Jo said she wishes she was more selfless.

Mary Jo and her husband married at 20 and 22, respectively. In the film, they admit they didn’t know what they were getting into when they tied the knot and simply did what was expected of them. George went on to fight in the Vietnam War while Mary Jo took care of the kids.

“I don’t know I would say there’s one particular message the film has,” Steger said. “I think when you make a film it should be something that people in the audience … reflect and connect to it in different levels … and all pull something different from it.”

One of the unique aspects of the film is its handling of Mary Jo’s illness, which is not treated as a source of fear, but as a fact of life and a reason for the couple to reflect on their life together. “Everybody dies,” Mary Jo says in the film. “You’re not gonna get out of here without dying.”

Still, “Stage Four” is quite sentimental. In one scene, the couple takes pictures by their backyard pool dressed up as the princess and the frog. George says later in the film that their relationship was a lot like the fairy tale because he was like Mary Jo’s frog that she tried to turn into a prince.

Steger devoted significant time and energy to creating this tribute to his parents. To fund production costs, he started an Indiegogo campaign that raised $17,500. Indiegogo is a crowdfunding website that allows users to raise money for various goals.

“The good thing about filmmaking these days is you can go out and produce a documentary [on] a very low budget,” Steger said. “So it didn’t cost me a lot necessarily to do all the filming and editing myself. So really, the fundraising came in after I shot the film completely and had already made an edit of the entire film.”

Steger used most of the proceeds to pay for finishing touches on the movie, like sound and color technology, as well as to enter the documentary into different film festivals to help it reach more audiences.

Steger also teamed up with Docs in Progress, a local non-profit that supports up-and-coming documentary filmmakers, to create the film. Because of Docs, Steger obtained a non-profit 501C3 status for his film, which made any donations it received tax-deductible.

As for filmmaking in general, Steger said it’s a difficult and time-consuming job, but it is well worth it if it’s what you love.

“First of all your heart really needs to be in it,” Steger said. “Whatever you’re making you have to be really passionate about it.”

There are many paths those interested in the film industry can take, Steger said, but if filmmaking is where your ambition lies, you have to be willing to roll with the punches.

Steger has published many short films and a documentary “Left Field,” which tells the story of Chicago’s unofficial kickball league. His experience as a producer, director, editor and cinematographer lets him bring real-world experience to the classes he teaches for Mason’s film and video studies department.

Week of Action against Sexual Violence