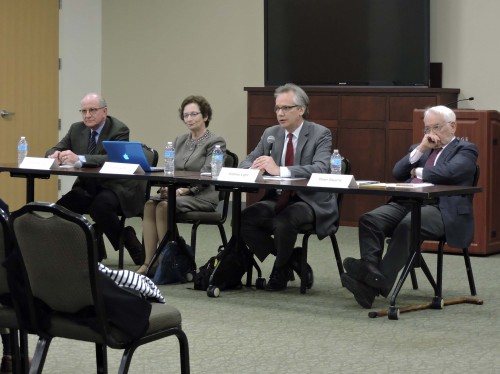 On Wednesday, the Roosevelt Institute at Mason hosted a panel to grapple with a question that is always in the back of students’ minds: Why does college cost so much?

The goal of the panel — titled “Research at Public Universities: Do We Need Radical Reform?” — was to respond to and expand on Robinson Professor Steven Pearlstein’s column published in the Washington Post in early February called “Four tough things universities should do to rein in costs.” In the article, Pearlstein suggested that too much of students’ tuition goes toward research of little impact and too little goes toward actual education.

The panel included Pearlstein, Robinson Professor of public affairs; Naomi Lynn Gerber, professor of rehabilitation science and director of the Center for Study of Chronic Illness & Disability; Andrew Light, university professor and director of the Institute for Philosophy and Public Policy; and Peter Stearns, university professor and provost emeritus. Every row seated an assortment of Roosevelt Institute members, faculty members and curious students.

“The most obvious thing to say is, if somebody told me 10 years ago that a panel of this sort would have been even remotely conceivable, I would have been flabbergasted,” Stearns said. “Like many academics, I was taught to believe that research was an absolute essential, normal and undiscussable [sic] part of our education.”

Stearns went on to say that the value of research that does not have an immediate, observable outcome, such as “curing cancer” would, is always called into question. He said the intensity of this concern has increased when combined with recent budget limitations at universities.

Pearlstein stated having professors conducting research is of direct value to the students because instructors who are “actively engaged in research and your field are better teachers,” and because these professors can create research opportunities for students as well. He also described the societal value of research by using the economic term “positive externality,” an indirect benefit.

However, despite the many benefits of research at public universities, Pearlstein said existing opinions about research need to be adapted to the current financial reality in which tuition has been increasing along with public resentment. He suggested having more permanent faculty devoted to teaching, especially if their research is of little impact.

Light countered Pearlstein’s suggestion by saying he doubted whether or not professors asked to teach more and research less could stay active in their field and pass on new knowledge to their students. He provided an alternative, where professors would be given the opportunity to choose between focusing completely on teaching or on research. This, he believed, would also circumvent the difficulty of predicting the impact of junior-level or newer research that would come with Pearlstein’s suggestion.

Gerber emphasized the importance of partnerships with the community, such as research opportunities with institutions like Inova Fairfax Hospital. They would be able to share the cost of research while also creating more opportunities for students and faculty alike.

Toward the end of the session, Stearns expanded his point about the novelty of this conversation, explaining it has come out of a current situation in which the public is not contributing as much to research as it has in the past.

Junior Beverly Harp, a Roosevelt Institute member who moderated the panel, expressed her hope that this event would be a “starting point” of conversations between students, their peers and their professors about public university research and its social and economic values.

“Students should have a seat in the table, students should be in the room,” Harp said. “We had a lot of talk tonight about tuition and the cost of education, and we are one of the main people paying that, so we should be a main actor in the policy change process.”